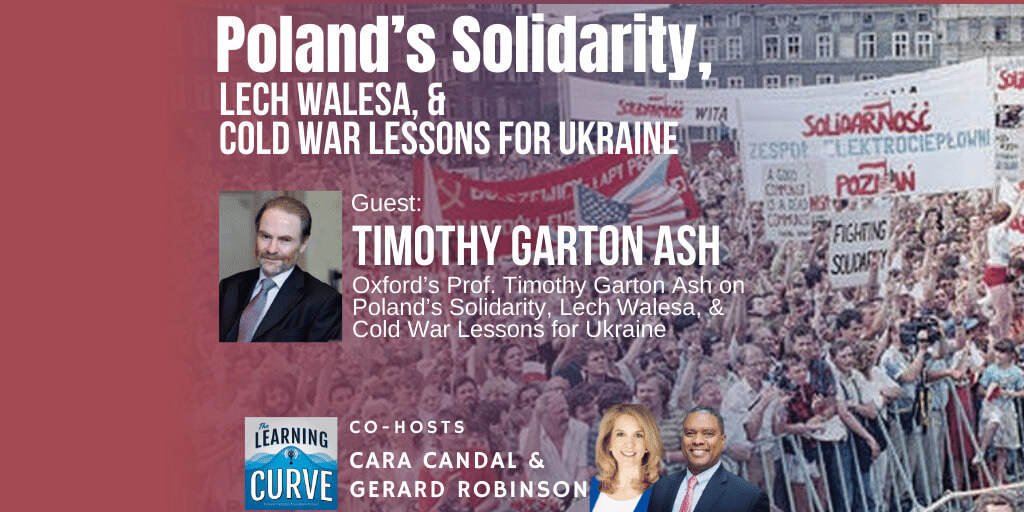 In this Labor Day edition of “The Learning Curve,” Cara Candal and Gerard Robinson talk with Timothy Garton Ash, Professor of European Studies at the University of Oxford, Isaiah Berlin Professorial Fellow at St Antony’s College, Oxford, and the author of The Polish Revolution: Solidarity. Professor Garton Ash shares insights on what both the public and students should know about Poland’s Solidarity movement, the first independent trade union (with 10 million members) behind the Iron Curtain, and its charismatic co-founder, Lech Walesa. They discuss the wide range of support for it, from U.S. President Ronald Reagan, Pope John Paul II, and British Prime Minister Margaret Thatcher, to peace campaigners and socialists, and how it helped topple Soviet communism. He explains Poland’s role during World War II as ground zero of the Holocaust, how Allied decisions at Yalta set the stage for the Cold War, and lessons that we should remember in the context of the Russian invasion of Ukraine. The interview concludes with a reading from his book.

Stories of the Week: Loan forgiveness programs and other issues surrounding higher education are already political – but could politicos push the envelope by imposing tuition caps or outcome-based funding, interfere with autonomy in hiring, or target affirmative action programs? A new initiative is tackling big, structural problems in K-12 education, developing tools that can help parents with more flexible learning options, greater equity, and access to postsecondary college and career opportunities.

Timothy Garton Ash is Professor of European Studies in the University of Oxford, Isaiah Berlin Professorial Fellow at St Antony’s College, Oxford, and a Senior Fellow at the Hoover Institution, Stanford University. At St Antony’s, he also directs the Dahrendorf Programme for the Study of Freedom. He is the author of ten books of political writing or ‘history of the present’ including The Magic Lantern: The Revolution of ‘89 Witnessed in Warsaw, Budapest, Berlin, & Prague; The File: A Personal History; In Europe’s Name; Facts are Subversive; and Free Speech: Ten Principles for a Connected World. His newest book, Homelands: A Personal History of Europe in Our Time, is scheduled for release in early 2023. He writes a column on international affairs in the Guardian, which is widely syndicated, and is a regular contributor to the New York Review of Books, amongst other journals. Awards he has received for his writing include the Somerset Maugham Award, Prix Européen de l’Essai, and George Orwell Prize. In May 2017, he was awarded the International Charlemagne Prize of the city of Aachen.

The next episode will air on Weds., September 14th, with Dr. Bill Evers and Ze’ev Wurman, of the Independent Institute.

Even as demand goes up for Black students in STEM fields, the supply of Black scientists, engineers and mathematicians is flat or falling. https://t.co/B8O5jL4Rem

Higher Education Is About to Get Even More Political

A New Initiative to Tackle Education’s Big Problems – For all the rhetoric around ‘reimagining’ and ‘reinventing’ schooling, there’s precious little to show for it.