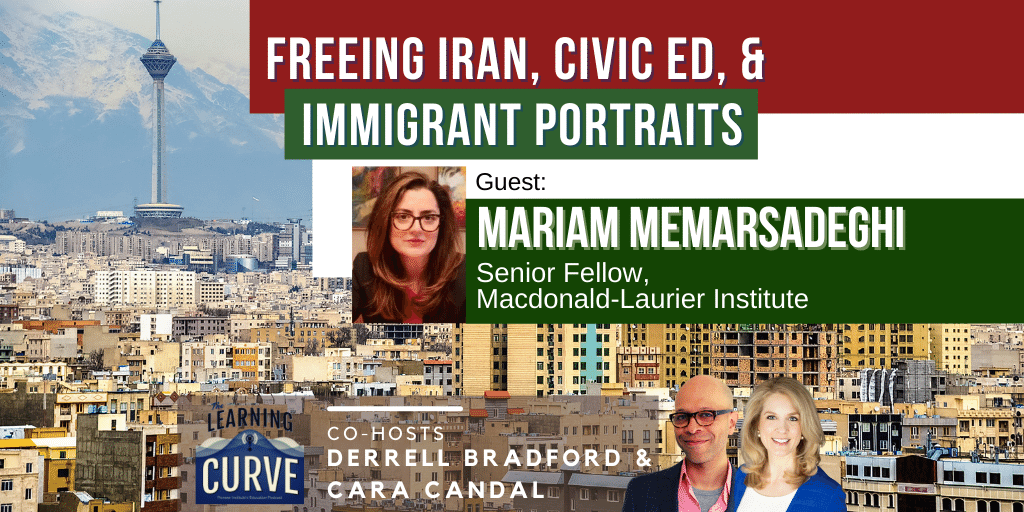 This week on “The Learning Curve,” co-host Cara Candal and guest co-host Derrell Bradford talk with Mariam Memarsadeghi, senior fellow at the Macdonald-Laurier Institute. Mariam shares remembrances from her early years spent in the Shah’s Iran, and emigration to the U.S. shortly after Ayatollah Khomeini’s revolution in 1979. They discuss the massive cultural and civic differences between the Islamic Republic of Iran, with its government controlled by religious leaders, and modern liberal democracies like the U.S., with constitutionally limited government, and how this difference is manifested in the treatment of women and political dissidents. Mariam describes Tavaana, an organization she co-founded that is dedicated to a free and open Iran, and how it is using the internet and other means to advance democracy, civic education, and women’s rights in Iran. They also discuss her involvement with “We the People”: The Citizen and the Constitution, a nationwide civics contest for American high school students that is run by the Center for Civic Education. She descibes her experiences as a Presidential Leadership Scholar, and one of 43 individuals chosen as a portrait subject for President George W. Bush’s April 2021 book, Out of Many, One: Portraits of America’s Immigrants.

Stories of the Week: From Texas, California and Colorado to Tennessee and Georgia, school districts are using some federal stimulus funding to award “thank you” bonuses to teachers to prevent resignations and boost morale after COVID-19. In New Jersey, one of nine states that have mandated in-person learning, some parents are raising concerns about the poor condition of the schools their children are being forced to return to.

Mariam Memarsadeghi is a senior fellow at the Macdonald-Laurier Institute. She is co-founder of Tavaana, a civil society capacity building and civic education project for the people of Iran. She has over 20 years of international civil society capacity building experience, including three years of post-conflict work in the Balkan region. She is a 2017 Presidential Leadership Scholar and an advocate for democracy, civic education, internet freedom, and women’s rights, particularly in Islamic contexts. Her writing has appeared in The Washington Post, The Wall Street Journal, Newsweek, and other publications. She is a frequent speaker at universities and think tanks worldwide, and has appeared on NPR, the PBS NewsHour, and C-SPAN, as well as other English, Persian, and Arabic language radio and television news programs. Ms. Memarsadeghi serves as a judge for the national finals of the “We the People” competition, a contest assessing knowledge of the Constitution among high school teams across the U.S. She was among the 43 individuals whose portrait President George W. Bush painted for his April, 2021 book, Out of Many, One: Portraits of America’s Immigrants. She was born in Tehran and emigrated to the U.S. shortly after the 1979 Iranian Revolution.

Derrell Bradford is the president of 50CAN. In this national role, he recruits and trains local leaders across the 50CAN network for roles as CAN executive directors, fellows, and YouCAN advocates. Derrell frequently contributes to education debates in print, digital, radio and TV media. A native of Baltimore, he attended the St. Paul’s School for Boys and the University of Pennsylvania, where he received a bachelor’s degree in English.

The next episode will air on Wednesday, July 28th, 2021 at 12 pm ET with guest, Robert Woodson, Sr., founder and president of the Woodson Center that supports neighborhood-based initiatives to revitalize low-income communities, as well as author and editor of the May 2021 book, Red, White, and Black.

Research shows using differentiated pay as an incentive to get high-quality teachers to work in high-need schools or teach hard-to-staff subjects works. However, not all differentiated pay is equally effective. Read more in our Smart Money 2.0 report.https://t.co/1vUei9zhFp

Hechinger Report: “After a year and a half at home, some parents don’t want their kids returning to run-down schools”