This week on Hubwonk, host Joe Selvaggi talks with Cicero Institute’s Jonathan Wolfson about the growing doctor shortage and the potential to alleviate the crisis by tapping the global supply of well-trained physicians eager to find safety and freedom in the US.

The infant formula crisis is just the latest example of another crisis exacerbated by a Biden-directed federal agency. The FDA appears to have other priorities. It was a bright sunny winter day in Washington, DC, on January 20, 1981, when Ronald Reagan, having just been sworn in as the nation’s 40th president, uttered these oft-quoted […]

This week on JobMakers, host Denzil Mohammed talks with Artur Sousa, immigrant from Brazil and founder and CEO of Adopets, an online platform that simplifies the work done by shelters and improves the pet adoption experience. Adopets has over 40,000 registered users and maintains more than 300,000 adoption listings. In this week’s JobMakers, Artur describes how opportunity, capitalism, circumstance and a rescue pup successfully aligned to fuel his social entrepreneurship success; though he is keenly aware that not every immigrant shares in the American Dream.

Join Greg and Rob Long as they hope reports of major downsizing at public schools over shrinking enrollment means public schools will need to compete for students and provide a much better education. They also cringe as Biden official Samantha Power seems happy that farmers are getting crushed by much higher fertilizer prices because it will accelerate the government’s green agenda. And they shake their heads at the administration’s latest COVID hypocrisy at the border.

Ayaan speaks with Jason Hill about free speech, immigration, and the power of individual agency. While they question the woke’s focus on equity and victimhood, above all, they are optimistic about the resilience of young people and the American determination to solve problems.

Jason D. Hill is a professor of Philosophy at DePaul University and an Honors Distinguished Faculty member. He specializes in ethics, political philosophy, moral psychology, and U.S. foreign policy.

This week on JobMakers, host Denzil Mohammed talks with Karina Calderon, deputy director of The Lawrence Partnership, about her work to help immigrant entrepreneurs drive economic growth in Lawrence, Massachusetts. The Lawrence Partnership is a collaboration of business and civic leaders started in 2015 that helps by incubating, training, assisting, loaning, basically doing everything they and their partners can to grow the city’s businesses. The model they’ve adopted is replicable for sure, and is one based on longstanding relationships and trust between new and longtime residents. Karina explains how it works, shares some of the success stories of their immigrant small business owners, and details her own immigration story, as you’ll learn in this week’s JobMakers. 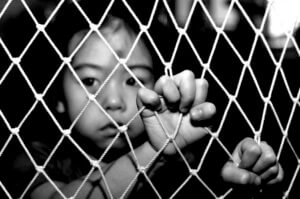 I think that Biden is facing three huge issues which will sink his Presidency, rising inflation, rising crime and his refusal to effectively deter an onslaught on the Mexican border.  Trump was able to justify his “Stay in Mexico” policy for refugees on Title 42 on the pandemic.  Well, the pandemic is essentially over and […]

This week on JobMakers, host Denzil Mohammed talks with Reinier Moquete, son of immigrants from the Dominican Republic and founder of CyberWarrior, a cyber security services provider in Boston, Massachusetts. Reinier shares why he is continuing the entrepreneurial tradition started by his grandmother and mother, who moved to the U.S. in search of a better quality of life for their families. Reinier describes his efforts to give back to the country that gave his family a chance, through non-profits and foundations he has launched that elevate disadvantaged communities, expose children to STEM education, and uplift particularly Latinx people in the U.S., as you’ll learn in this week’s JobMakers.

This week on JobMakers, host Denzil Mohammed talks with Dinesh Wadhwani, founder and CEO of ThinkLite, LLC in Natick, Massachusetts, and immigrant from Ghana. His journey began when his grandfather was forced to flee India, and built a business in Ghana that paved the way for the generations to come. When Dinesh moved to the United States in 2008 as a student at Babson College, he was determined to build a life and a business here in the U.S. While he was studying entrepreneurship, he became one: in just a few short years, his technology-based life science solutions business expanded across the globe and evolved into a life-saving enterprise, purifying the air in hospitals during the COVID-19 pandemic, as you’ll learn in this week’s JobMakers.

First I spoke to a young man I know who recently began working for a rather large California tech company who opened a large facility near here.  He enjoyed his work, but he was bothered because he had to do much of the work of people that did not “know English”.  From our conversation and […]

The border crisis was in plain view in September when Americans were stunned by images of thousands of migrant families huddled under a bridge in Del Rio, Texas. Less dramatic, but no less important, is a 180-mile stretch of border to the west, where New Mexico borders on Mexico, where illegal migrants are more likely to be single males trying to avoid detection.

New Mexico Congresswoman Yvette Herrell, whose district includes her state’s entire international border, joins Parsing Immigration Policy to describe the situation there and the impact the non-stop flow of migrants is having on New Mexico and the rest of the country.