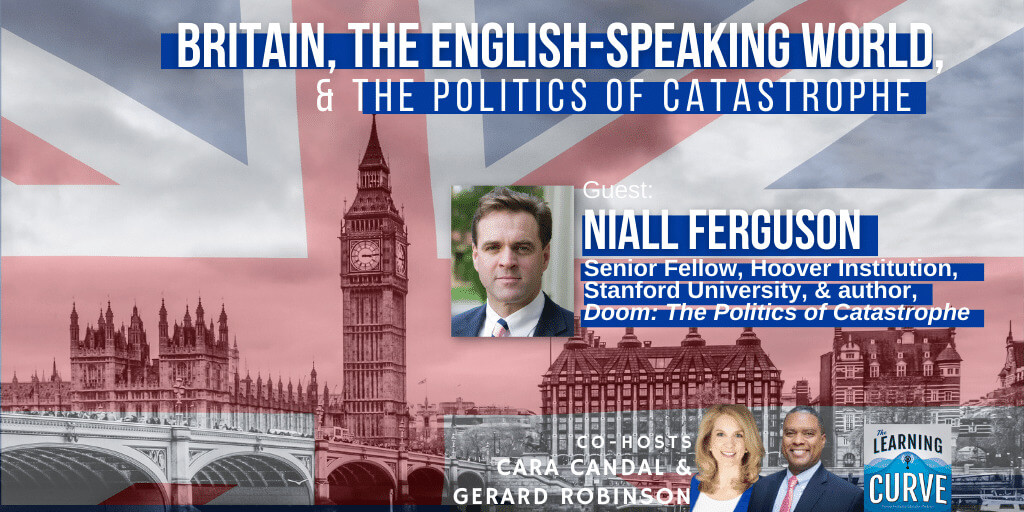 This week on “The Learning Curve,” Cara Candal and Gerard Robinson talk with Dr. Niall Ferguson, the Milbank Family Senior Fellow at the Hoover Institution, Stanford University, and a senior faculty fellow of the Belfer Center for Science and International Affairs at Harvard. He is the author of 16 books, including Doom: The Politics of Catastrophe. Dr. Ferguson comments publicly for the first time on the recent passing of Queen Elizabeth II, the longest-reigning British monarch, and how we should teach about Britain’s wide impact – positive and negative – on the world in her era and over the last several hundred years, from the Magna Carta to Winston Churchill. Dr. Ferguson shares findings from his most recent book, which charts the history of disasters, from the 1346–1353 Black Death to COVID; whether our handling of these catastrophes – from both public health and economic standpoints – has improved; and how we can learn from mistakes to better prepare for the future. He describes the kind of education he imparts to his own children to help ensure they have the wisdom and resilience to live in a turbulent world. The interview concludes with Dr. Ferguson reading from his latest book.

Stories of the Week: Are schools of education helping future teachers develop content expertise, or are they too focused on pedagogy and ideology? In Philadelphia, the Martin Luther King High School is the city’s first school with Black faculty for all core freshmen subjects, a step forward in the effort to ensure students can benefit from diverse role models.

The next episode will air on Weds., September 28th, with Sal Khan, the founder and CEO of Khan Academy and Amy McGrath, the Chief Operating Officer of ASU Prep and Deputy Vice President of ASU Educational Outreach.

Niall Ferguson, MA, DPhil, FRSE, is the Milbank Family Senior Fellow at the Hoover Institution, Stanford University, and a senior faculty fellow of the Belfer Center for Science and International Affairs at Harvard. He is the author of sixteen books, including The Pity of War, The House of Rothschild, Empire, Civilization, and Kissinger, 1923-1968: The Idealist, which won the Council on Foreign Relations Arthur Ross Prize. He is an award-making filmmaker, too, having won an international Emmy for his PBS series The Ascent of Money. His 2018 book, The Square and the Tower, was a New York Times bestseller and also adapted for television by PBS as Niall Ferguson’s Networld. In 2020 he joined Bloomberg Opinion as a columnist. In addition, he is the founder and managing director of Greenmantle LLC, a New York-based advisory firm, a co-founder of Ualá, a Latin American financial technology company, and a trustee of the New York Historical Society, the London-based Centre for Policy Studies, and the newly founded University of Austin. His latest book, Doom: The Politics of Catastrophe, was published last year by Penguin and was shortlisted for the Lionel Gelber Prize.

In at least some states and school districts, the share of pension costs now amounts to nearly a third of payroll, according to a new analysis. https://t.co/sTFKB0Itdk