Yes, it’s that time again.  Time for a news roundup of what’s going on in the dystopia that Seattle and environs are becoming.  Contributed to by the perverse state law that prohibits police pursuit of fleeing vehicles, which results in hundreds more stolen cars and criminals allowed to get away.

First, we have the case of a man in Puyallup who is accused of shooting two police officers.  His bail has been set at $2 million.

The Memphis Police Department has released the body cam footage of the death of a young black man, Tyre Nichols, at the hands of five police officers. This is the statement given by Memphis Police Chief Cerelyn Davis. All five officers are black. All five have been fired and indicted. All five were hired in […]

I know this story has had some prominence even before they released the videos this evening.  I had not paid attention.  I try to avoid sensational news, and another policing story is just another in a string.  You never really know who to believe because it’s not always that clear. But then I watched the […]

Whenever I have discussed the teachers who have chosen to teach inappropriate subjects, such as Critical Race Theory or who coach their students on transgenderism, or teachers who have insisted that kids wear masks, a teacher often speaks up supporting my criticism of those teachers. At the same time, however, they point to the power of the teachers’ unions and the risks that teachers would be taking to defy them.

Fearless as he often is, Ron DeSantis is defying the unions, assisting the teachers, and supporting parents through his recommendations to the Legislature:

A California court on Friday released surveillance and bodycam video of the October 2022 attack on Paul Pelosi, husband of former House Speaker Nancy Pelosi, at their San Francisco home.

After having fun with the Associated Press war on “the,” Jim & Greg applaud Florida Gov. Ron DeSantis for a 50-year low on crime and aggressive proposals to crack down on child predators and and fentanyl pushers. Jim also walks us through the major water dilemma facing western states and why government intervention is not inspiring a lot of confidence. And they shake their heads as a Biden judicial nominee can’t explain the subject of Article V or Article II of the Constitution. 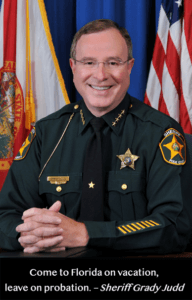 My husband and I heard our sheriff, Polk County Sheriff Grady Judd, speak this morning.  Polk County’s crime stats go down every year.  Even with the massive influx into our county of people from the Northeast over the last two years, they have continued to go down.  The stats for 2022 were at a 50-year low – all due to the philosophy and programs of Sheriff Judd.

He believes that law-abiding citizens are his to protect and they deserve more consideration than the people who prefer to take rather than to earn.  His deputies have arrested a person for shoplifting a $2.19 soda. The “broken windows” philosophy of law enforcement is effective.  A little different than in California, where people can steal up to $950 with little fear of arrest.

I-4 has earned the designation as the nation’s most dangerous interstate for several years. Because of that, Sheriff Judd implemented unmarked police cars on the portion of I4 in Polk County. Last year, they stopped 8,000+ drivers and arrested and took to jail 200+ who were driving in excess of 100 mph and recklessly weaving in and out of traffic.  These drivers had to return to Florida for trial and either received probation or jail time, depending on their offense.

What’s bugging Dennis Kneale this week? How about the recent riot in Atlanta? Let’s investigate Antifa as a terrorist organization.

Then ex-PriceWaterhouseCoopers CMO John Sviokla talks about the reported fusion breakthrough and why we won’t deliver on its promise without more government support.

To bring greater attention to the issue of human trafficking, Jessica Vaughan, the Center’s Director of Policy Studies, joins our podcast this week to highlight border-related human trafficking. Current immigration policies are responsible for an out-of-control southern border and for lax guest worker programs, both of which are major contributors to the human trafficking industry in the United States. How do we end this criminal exploitation of the vulnerable?

Vaughan clarifies the important distinction between human trafficking and human smuggling, and describes how smuggling operations can develop into trafficking, which is on the rise. Forced labor trafficking is the most common form of trafficking at our Southern border, and Biden’s border policies create incentives for both smuggling and trafficking.

Met Stephen Murphy over 20 years ago. Very successful San Francisco lawyer doing mostly plaintiff employment law like I was. Never worked on a case together but had similar contacts and kept in touch.  Got appointed as a San Francisco Superior Court judge. Even though he was smarter than 90% of the civil trial judges […]

A Naval Hymn shared by the US Navy and the British Royal Navy. Lyric poetry as well as a hymn. So, take a break from the latest outrage du jour. The first video features the lyrics as sung in St. Thomas’ Cathedral in Portsmouth, England. The second video features a US submarine. Preview Open

What you are about to read is an actual conversation I had with the AI known as ChatGPT. Aside from the pleasantries at the beginning of the conversation, what you will read is the entire, unedited, discussion until its unfortunate conclusion. The only edits I will make will be to edit out my email address and to identify the comments made by Chat GPT. For my part, I used my phone’s voice type to ask questions or make statements. Any errors there are on the part of Android. Please note that Chat GPT still got the gist of my statements/questions despite the typos.