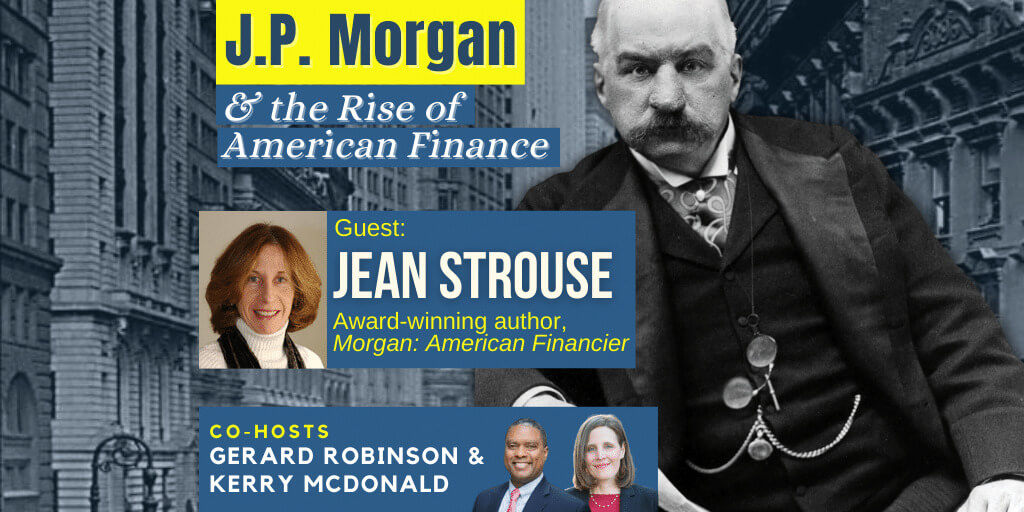 This week on “The Learning Curve,” Gerard Robinson and guest co-host Kerry McDonald talk with Jean Strouse, author of the award-winning biography of J.P. Morgan, Morgan: American Financier. They discuss why the general public and students alike should know more about the life and accomplishments of the controversial, late 19th- and early 20th-century American banker. She explains Morgan’s role as a stabilizing figure while serving as the de facto central bank during financial booms and panics, and his importance in the creation of U.S. Steel, Edison General Electric, and the railroad empire, all of which helped propel the nation’s economic ascent. He was also involved in public disputes with Theodore Roosevelt and other Progressive-era figures over the power of business trusts and monopolies. Finally, Ms. Strouse describes Morgan’s famous art collecting, and one of the most interesting figures in his life, Belle da Costa Greene, who was director of the world-renowned Pierpont Morgan Library. The interview concludes with Ms. Strouse’s reading from her biography of J.P. Morgan.

Stories of the Week: Survey data show more Americans are considering foregoing college in favor of alternatives to career pathways, and enrollment has not seen a post-COVID rebound. For those families who do plan for college, U.S. News offers some tips, including starting the search early, talking to recruiters, learning effective study habits, and more.

Jean Strouse is the author of Morgan: American Financier and Alice James: A Biography, which won the Bancroft Prize in American History and Diplomacy. Her essays and reviews have appeared in The New Yorker, The New York Review of Books, The New York Times, Newsweek, Architectural Digest, and Slate. She has been President of the Society of American Historians, a consultant (oral historian) to the Bill & Melinda Gates Foundation, and a Fellow of the John D. and Catherine T. MacArthur Foundation. A member of the American Academy of Arts and Sciences, the American Philosophical Society, and the Executive Council of the Authors Guild, she was the Sue Ann and John Weinberg Director of the Dorothy and Lewis B. Cullman Center for Scholars and Writers at The New York Public Library from 2003 to 2017. She is currently writing a book about John Singer Sargent’s twelve portraits of the family of Asher Wertheimer, a prominent London art dealer.

The next episode will air on Weds., July 20th, with Bernita Bradley, the founder of Engaged Detroit, a parent-driven urban school reform advocacy network.

Virtual reality in the classroom may sound complicated to master, expensive to implement, and generally more trouble than it is worth.

But those are misconceptions, said two teachers who regularly use the technology in their classrooms. #EdTechhttps://t.co/ER4pPBiCXX

Is college worth it? Americans say they value higher education, but it’s too expensive for many

Tips for Starting the College Search