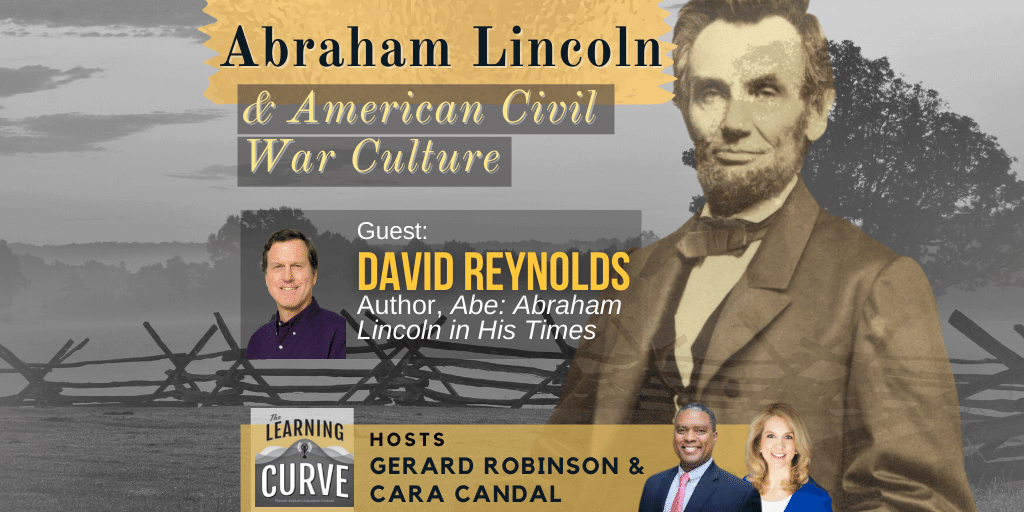 This week on “The Learning Curve,” co-hosts Gerard Robinson and Cara Candal talk with David Reynolds, a Distinguished Professor of English and History at the Graduate Center of the City University of New York. He is the author of Abe: Abraham Lincoln in His Times, selected as one of the Top Ten Books of the Year by The Wall Street Journal and The Washington Post. Professor Reynolds shares what teachers and students alike should know about the culture of Civil War America, primary education in that era, and the wide variety of influences on Lincoln’s thinking and leadership. They delve into the most bitterly contentious political topics of Lincoln’s time, including slavery, states’ rights, trade tariffs, and women’s rights, and how the 16th president addressed the nation’s many political divisions. They also explore how Lincoln used his rustic image to shape his public persona and appeal to voters; and how he marshaled his rhetorical talent, invoking biblical language and the ideals of the American founding, to win the war, preserve the Union, and ultimately abolish slavery. Professor Reynolds concludes with a reading from his biography.

Stories of the Week: Washington Post columnist Jay Mathews recognizes the work of Will Fitzhugh, founder of The Concord Review, to encourage students’ interest in historical fiction and reward long-form research and writing. A new project of the Teagle Foundation and the National Endowment for the Humanities promises to restore the humanities in undergraduate education.

David Reynolds is a Distinguished Professor of English and History at the Ph.D. Program at the CUNY Graduate Center. He’s the author or editor of sixteen books, including Abe: Abraham Lincoln in His Times (2020), which was a noted book of the year by The Wall Street Journal and Washington Post. Prof. Reynolds is the winner of the Bancroft Prize, the Lincoln Prize, the Christian Gauss Award, the Abraham Lincoln Institute Book Award, the Ambassador Book Award, the Gustavus Myers Outstanding Book Award, John Hope Franklin Prize (Honorable Mention), and finalist for the National Book Critics Circle Award. He is a regular contributor to The New York Times Book Review, The New York Review of Books, and The Wall Street Journal.