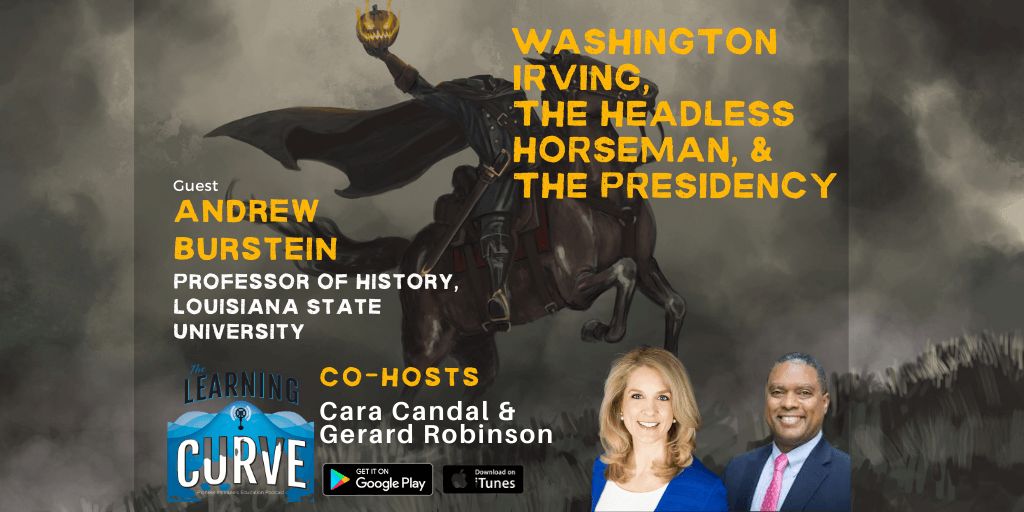 This week on “The Learning Curve,” Cara and Gerard are joined by Andrew Burstein, the Charles P. Manship Professor of History at Louisiana State University, and author of The Original Knickerbocker: The Life of Washington Irving, and with Nancy Isenberg, The Problem of Democracy: The Presidents Adams Confront the Cult of Personality. As we near Halloween, Professor Burstein explains why Irving’s short stories and tales, with their distinctive blend of imagination and nostalgia, continue to delight audiences young and old, and how the Headless Horseman from “The Legend of Sleepy Hollow” became one of literature’s most infamous ghosts. In addition to being the U.S. ambassador to Spain and becoming an international celebrity, they discuss how Irving Americanized the Christmas holiday, including its central figure, St. Nicholas, and influenced Charles Dickens’ A Christmas Carol. Lastly, as the nation prepares for a contentious election, they turn to Professor Burstein’s biographies of the two Adamses, Jefferson, Madison, and Jackson. They discuss the devolution of the American presidency into a cult of personality, and whether this departs from the Founding Fathers’ vision and expectations for the chief executive. Professor Burstein concludes with a reading from his Irving biography.

Stories of the Week: In New York City, Mayor DeBlasio is demanding that Success Academies charter public schools pay $500,000 so that students can continue using school district athletic fields they have been practicing on for years. The 2020 American Federation for Children has published its 2020 school choice guidebook, providing state-by-state information and analyses on educational options such as voucher, ESA, and tax credit scholarship programs across the country.

SPECIAL HALLOWEEN EPISODE!
The next episode will air on Friday, October 30th, 2020 at 12 pm ET with guest, Stacy Schiff, a Pulitzer Prize winner, and author most recently of The Witches: Salem, 1692.

Andrew Burstein is the Charles P. Manship Professor of History at Louisiana State University and the author, most recently with Nancy Isenberg, of The Problem of Democracy: The Presidents Adams Confront the Cult of Personality. Other titles by Professor Burstein include, Democracy’s Muse (2015); Lincoln Dreamt He Died (2013); also with Nancy Isenberg, Madison and Jefferson (2010); a complete biography of literary icon Washington Irving, The Original Knickerbocker (2007); Jefferson’s Secrets (2005); The Passions of Andrew Jackson (2003); and America’s Jubilee (2001). He has taught graduate and undergraduate courses at LSU since 2008, and previously at the University of Tulsa and the University of Northern Iowa. Professor Burstein was a consultant to documentary films, including the 1997 Ken Burns/PBS production “Thomas Jefferson,” and he has been featured many times on C-SPAN. He received a B.A. in Oriental Studies from Columbia University, an M.A. from the Center for Chinese Studies at the University of Michigan, and a Ph.D. in History from the University of Virginia.

For K-2 students: There has been a 9 percentage point drop in students meeting literacy benchmarks