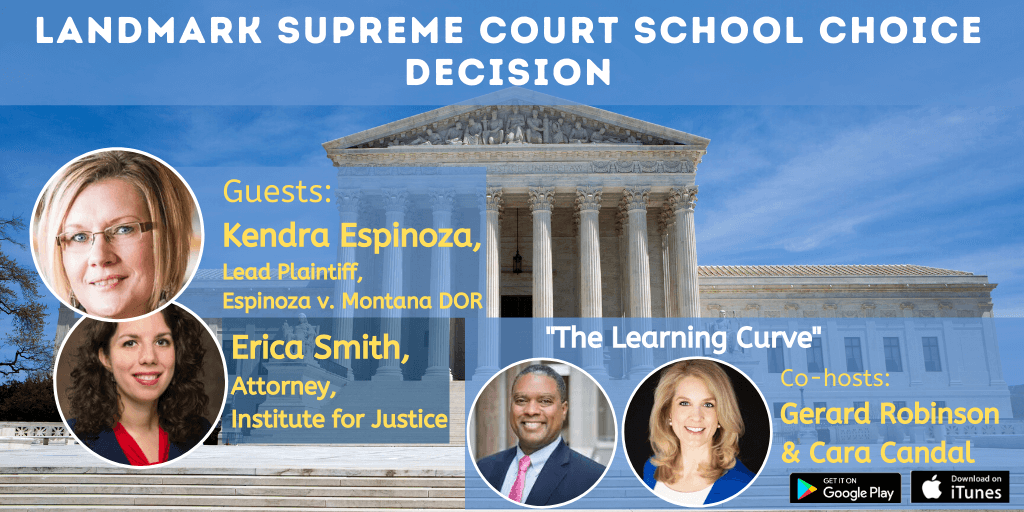 This week, in a special segment of “The Learning Curve,” Cara and Gerard are honored to be joined by Kendra Espinoza, lead plaintiff in the landmark U.S. Supreme Court case, just decided yesterday, Espinoza v. Montana Department of Revenue, and Erica Smith, an attorney with the Institute for Justice, which represented the plaintiffs. Kendra shares what motivated her and her daughters, Naomi and Sarah, to take such a courageous stand for school choice and religious liberty, and describes her experience being the lead plaintiff in a high-profile Supreme Court case. She also discusses the other Montana moms involved in the case, their reaction to the successful outcome, and the realization of the impact it will have on so many families across the country. Erica shares her thoughts on the decision’s wide-ranging constitutional implications; some surprising aspects of the decision that may prompt future legal battles; and a preview of a state-by-state analysis on which states are best positioned to expand access to school choice now.

Story of the Week: Yesterday, the U.S. Supreme Court ruled in favor of the plaintiffs in the Espinoza v. Montana Department of Revenue case, involving Montana parents who were denied access to a state tax credit program when they sought to use it to send their children to religious schools. The Court held that Montana’s Blaine Amendment cannot be used to exclude religious school parents from the state education tax credit program. In the majority opinion, Chief Justice Roberts wrote: “A State need not subsidize private education. But once a State decides to do so, it cannot disqualify some private schools solely because they are religious.”