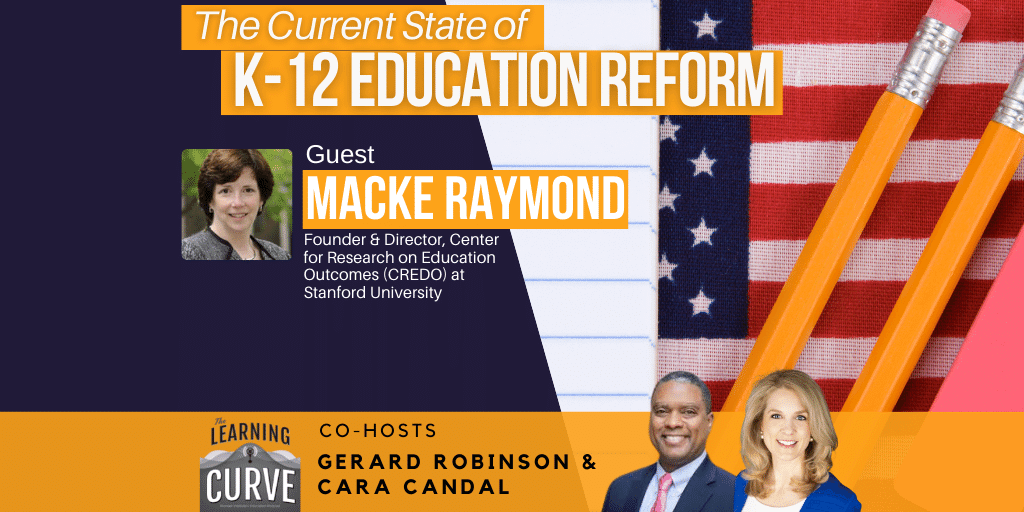 This week on “The Learning Curve,” co-hosts Cara Candal and Gerard Robinson talk with Dr. Margaret “Macke” Raymond, founder and director of the Center for Research on Education Outcomes (CREDO) at Stanford University. She shares some of the major highlights from Hoover’s recent Education Summit that featured a wide variety of national and international experts. They discuss the reasons for persistent problems, even after several federal efforts, with American students’ performance on important exams such as NAEP, TIMSS, and PISA, and the best path forward for state and federal education reforms. They discuss the shift in political support for charter schools, and the outlook for expansion among charters as well as private school choice programs. Dr. Raymond offers thoughts on the implications of the successful U.S. Supreme Court decision on Espinoza, and the likelihood of another victory in the Carson v. Makin case.

Stories of the Week: In Rhode Island, a federal lawsuit over whether there is a constitutional right to an adequate civics education has led to an agreement to improve instruction. States such as Texas and California are directing portions of the $350 billion in federal COVID relief aid to create or expand service and conservation corps programs.

Dr. Margaret “Macke” Raymond has served as the Director of CREDO since its inception. She has steered the group to national prominence as a rigorous and independent source for policy and program analysis. She has done extensive work in public policy and education reform, and is currently researching the development of competitive markets and the creation of reliable data on program performance. Macke also leads CREDO in investigating the effectiveness of public charter schools. Prior to joining Stanford in 2000, she held faculty positions in the political science and economics departments at the University of Rochester. Macke also worked for a number of years in the telecommunications industry and was President of Raymond Associates, a private consulting company specializing in public policy research projects and telecommunications policy formulation, from 1985 to 2000.

The next episode will air on Weds., June 22nd, with Dr. Deborah McGriff, a former Managing Partner with NewSchools Venture Fund and a former urban superintendent.

Think learning loss will just vanish? Think it will vanish for all kids the same way? This report from @vkoganpolisci suggests otherwise. https://t.co/tmxJddstDc pic.twitter.com/6nq70gBd2r

State and local governments are leading the way on service programs