This week on “The Learning Curve,” co-hosts Cara Candal and Gerard Robinson talk with Dr. Margaret “Macke” Raymond, founder and director of the Center for Research on Education Outcomes (CREDO) at Stanford University. She shares some of the major highlights from Hoover’s recent Education Summit that featured a wide variety of national and international experts. They discuss the reasons for persistent problems, even after several federal efforts, with American students’ performance on important exams such as NAEP, TIMSS, and PISA, and the best path forward for state and federal education reforms. They discuss the shift in political support for charter schools, and the outlook for expansion among charters as well as private school choice programs. Dr. Raymond offers thoughts on the implications of the successful U.S. Supreme Court decision on Espinoza, and the likelihood of another victory in the Carson v. Makin case.

Stories of the Week: In Rhode Island, a federal lawsuit over whether there is a constitutional right to an adequate civics education has led to an agreement to improve instruction. States such as Texas and California are directing portions of the $350 billion in federal COVID relief aid to create or expand service and conservation corps programs. 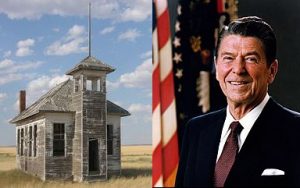 Ronald Reagan represented a fundamental shift from the long bipartisan consensus on the Cold War. After Presidents Truman and Eisenhower oversaw the Korean “Conflict,” our strategic leadership and thinking turned pessimistic. We shifted from an assumption that our system had greater viability and resilience to a defensive crouch, hoping the horse might learn to sing before the bear and the dragon consumed the world. Reagan radically rejected that dark view. Today, we face a continuation of the same struggle in a new guise, and once again people who identify as conservative are mostly pessimistic, believing that the best we can hope for is a long delaying action, ending in leftist victory. Donald Trump represented a shift in the cultural war, the internalized Cold War between freedom and totalitarianism.

In the immediate aftermath of World War II, America stood alone as a superpower. We alone had achieved dominance on land AND air AND sea. America alone had the demonstrated ability to rain nuclear fire on its enemies. In this context, George Kennan’s famous 1946 “Long Telegram” expressed confidence that the United States could prevail, without open warfare, against the Soviet Union.* His conclusion is well worth our reading or re-reading in today’s context, so I reproduced it below. 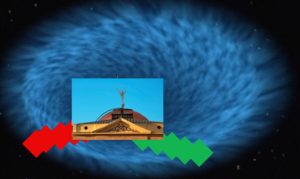 Teachers have been revealed more fully to many parents as radical leftist propagandists, party cadre members rather than the supposedly noble public servants politicians of all stripes venerate. The left is starting to notice and worry that their education allies are overplaying their hand here as the left’s black uniformed militia is on streets across the country. One story jumped out at me in Texas, not because of the teacher and selected student comments, but because of what was not said but shown. I invited others to look at the same picture. We were partially right, but the final answer was: Every Election Matters.

In mid August, the Rutherford County schools told parent not to monitor their children’s virtual classrooms. The administrators lied that this was about protecting privacy of other students, a clear fiction. Everyone knows this was about trying to intimidate parents into not collecting evidence of the ideological poison being poured into their children’s minds. We were treated a week before that to a teacher in another state musing on Twitter about losing the ability to conceal what he was doing in class from parents and saying that he had always had kids agree to keep it from parents. That is a giant red flag.

Our Republican governor and his top doctor, a sad reflection of the national failure of supposed public health leaders, have much work to do in informing the public of real medical data, quantifying the harm inflicted on school children’s brain development and general health from the school closures. Indeed, President Trump needs to force that public discussion with a serious expansion of the medical experts advising and briefing him and the nation. He must get out of his self-justification for being deceived at the beginning by the most senior federal health officials. After all, he has already pointed to making good decisions that went against early “medical expert” advice. Now he needs to make terribly clear the carnage of the Fauci Fraud while noting Tony is limited by his narrow specialty and just could not see all the rest of medical science affecting his recommendations. In the Newsmaker Interview, Cara talks with Wilfred McClay, University of Oklahoma Professor and author of Land of Hope: An Invitation to the Great American Story, a new high school history textbook that seeks to provide an account of this nation’s rich and complex story that puts it in proper perspective, and that is both honest and inspiring.

Stories of the Week: Are retirement benefits that are crowding out spending on current teachers’ priorities a “hidden driver” of union strikes like the one announced last week in Chicago? In California, there’s a rise in “due process” settlements in legal battles over access to special education services – but who benefits?  In Rhode Island, Providence’s Mayor plans to allow a charter school network to open one additional school, but then to ask the state to limit the expansion of all other charters in that beleaguered school district.