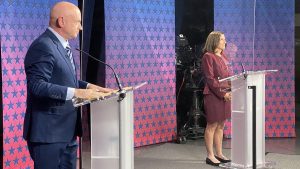 But Kelly’s actions show disdain for gun rights. The Giffords Law Center to Prevent Gun Violence, which Kelly co-founded, endorsed California as the best model for gun laws while giving Arizona an F.

Californians fleeing their state might vote for the same failed policies in their new home of Arizona. If so, Mark Kelly is their guy. Arizonans who view the basket case to our West as a cautionary tale need to think twice.

Politicians love making promises almost as much as they love breaking them once they arrive in DC. It’s voters’ duty to trust but verify these oaths, although the trust part is optional.

For Kelly, the issue of gun control is personal. His wife, Rep. Gabby Giffords, was shot by a mentally ill man in 2011, leaving her with a traumatic brain injury. The gunman killed six others, all with a weapon he legally bought following a background check.

Kelly’s activism is understandable, but he should be honest about it. He is free to push all the gun control measures he wants; Arizona voters are free to disagree.

Following the Tucson shooting, Kelly and Giffords founded a gun control group called Americans for Responsible Solutions. In 2017, they renamed it Giffords, including a legal arm and political action committee.

The group’s mission is “fighting to end the gun lobby’s stranglehold on our political system.” Their long list of political endorsements includes some of the most passionate opponents of our Second Amendment rights.

The Giffords group endorsed Gov. Gavin Newsom in 2018, celebrating California for having the strictest anti-gun laws in the nation.

“I’m so honored to receive the support of Gabby and Mark — two incredible advocates and selfless public servants,” Newsom said. “I have long admired their work across the country fighting to end gun violence, and I’ve been proud to partner with them to strengthen our gun safety laws here in California.”

Newsom is eager to push his “gun safety” laws on Arizona with another ally in the U.S. Senate.

Kelly and Giffords also endorsed Illinois Gov. J.B. Pritzker that year for his attacks on the Second Amendment. Needless to say, Arizona has plenty of former Land of Lincoln residents as well. They fled for a reason.

House Speaker Nancy Pelosi and Reps. Jerry Nadler (D–N.Y.) and Adam Schiff (D–Calif.) earned the coveted Kelly/Giffords endorsement. While Mark Kelly might not mention the words “Democrat” or “progressive” in his ads, he sure likes far-left candidates.

They even endorsed Rep. Pramila Jayapal (D–Wash.), who praised Seattle’s violent CHAZ as “planting the seeds of justice.” The next day she called for “decriminalizing homelessness” and to “re-imagine and rebuild law enforcement across the country in order to finally put an end to police brutality, militarization, and anti-Blackness.”

Just like Sen. Kyrsten Sinema, Mark Kelly fills his ads with waving flags, pickup trucks, and paeans to tradition and the Constitution. But if the past is prelude, a Senator Kelly will push Sacramento and Seattle laws on the freedom-loving voters of Arizona.

I suspect Arizonans don’t want to see their state turned into California. Mark Kelly hopes they do.