Join Jim and Greg as they cheer the impending resignation of New Zealand Prime Minister Jacinda Ardern, whose years in power were most notably marked by draconian COVID policies and unilaterally outlawing the right to own many different weapons. They also shake their heads as some House Republicans propose a national 30 percent sales tax to replace all other federal taxes. They appreciate the effort to simplify the code and hope discussions continue but fear this plan will only be used by Democrats to hammer Republicans. Finally, they respond to former Vice President Al Gore bellowing about boiling oceans and a billion climate refugees.

…to the Federal Government. Frankly, I am shocked that I am the first writing about it on Ricochet.

Ballot Measure 114 is a draconian gun control measure that passed in the 2022 election cycle. Needless to say, it will not prevent criminals from obtaining firearms, nor prevent them from using firearms in a crime. Written statutes do not prevent crimes, if they did armed robberies, and murder would have ended eons ago. The […]

“The idea — the idea we still allow semiautomatic weapons to be purchased is sick,” Biden continued. “It’s just sick. It has no, no social redeeming value. Zero. None. Not a single, solitary rationale for it except profit for the gun manufacturers.” 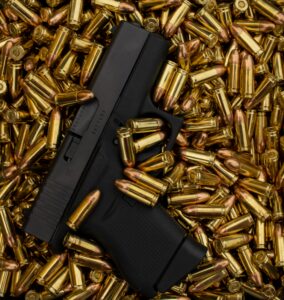 Once again, the federal government is conspiring with the political Left to take away our guns. The bureaucrats think they have skirted around a violation of the Constitution by conspiring with the private sector, but they will discover soon enough that they are wrong.

In the name of “the safety of our people,” Justin Trudeau issued an order stopping all handgun sales and transfers.

Canada does not have a Second Amendment.  I wonder how he intends to stop all illegal handgun transfers to and between criminals. Does he even think he can?  Somehow, I don’t think this order is going to improve the safety of his population.

Did you hear the gun violence outrage and the saturation of media coverage, over the school shooting that occurred at the Rudsdale High  School in Oakland?

Me either. I guess hurricanes are handy excuses for the media to ignore inconvenient stories. In this narrative non-conforming event, two gang members exchanged 30 rounds on the high school campus, injuring six bystanders. Here’s a link from NPR.

Ayaan speaks with Sylvia Bennett-Stone about violence in America, the importance of community, the Black Lives Matter movement, and our flawed criminal justice system. Finally, they discuss how to find purpose after losing a child?

Sylvia Bennett-Stone serves as the Executive Director of the Voices of Black Mothers United (VBMU) initiative. After losing her daughter to senseless violence in 2004, Sylvia began her life-long commitment of helping uplift the lives of others by founding the Innovative Approach Foundation and chronicling her own healing journey in her book “Mindfields: A Healing Journey to Survive the Murder of a Child”. It is from these committed efforts to serve the community that she started Voices of Black Mothers United. With Sylvia at the helm as Executive Director, the VBMU initiative has grown to service thousands of mothers who have lost children and are implementing solutions to address community violence.

Join Jim and Greg as they remember the late former Soviet leader Mikhail Gorbachev and discuss how he will be remembered if history is accurate. They also welcome news that Herschel Walker now enjoys a slight lead in the Georgia U.S. Senate race and dissect John Fetterman’s decision to drop out of a Senate debate in Pennsylvania. And they cringe at President Biden’s numerous gaffes and lies as he campaigned for Fetterman and others Tuesday in Pennsylvania.

You have a right to your own life. The video speaks for itself. Preview Open

Join Jim and Greg as they serve up three very bitter martinis. First, it’s a double shot of bad as Sen. Joe Manchin abandons his inflation concerns to push corporate tax increases and hundreds of billions in climate change programs – and it’s all going to happen because the GOP got outsmarted by Senate Dems. They also fume as the Biden administration offers to free one of the world’s worst terrorists in exchange for two Americans held in Russia. And they lament a new Gallup poll showing that just 29 percent of Americans think couples with children should be married. And the numbers aren’t that much better among conservatives.

Gun control tended to be used to disarm blacks when they were first introduced. Has the justification changed that much since then? Do the leaders of the democratic party actually have a much higher view of blacks than when Wilson was watching Birth of a Nation in the White House theater, or LBJ was cynically using the Civil Rights Act for votes?

Join Jim and Greg as they welcome the Supreme Court marshal urging state officials in Virginia and Maryland to protect Supreme Court justices and stop protests outside their private homes. But they do wonder why it took her almost two months to do this. They also get a kick out of California Gov. Gavin Newsom trying to claim there is more freedom in California than in Florida in his laughable attempt to troll Florida Gov. Ron DeSantis. And they fume as yet another mass shooter littered the internet with his fascination with other mass killings.

As the United States celebrates 246 years since we declared our independence, Jim and Greg each list three things they love about America.

It did not take long for New York to respond to the Supreme Court’s decision overturning the onerous conditions placed on lawful gun owners who applied for a concealed-carry firearms permit.  The Wall Street Journal says:

On Thursday, New York lawmakers will vote on a bill that would require people applying for a concealed-weapons permit to attend in-person training sessions and let officials access their mental-health records during a background check, according to people briefed on the measure.