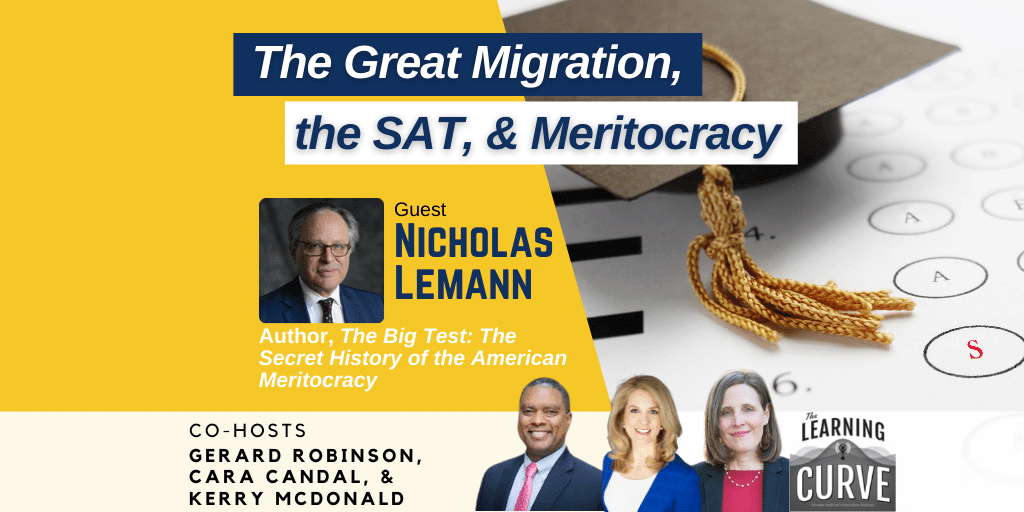 This week on “The Learning Curve,” guest co-host Kerry McDonald talks with Nicholas Lemann, Joseph Pulitzer II and Edith Pulitzer Moore Professor of Journalism and Dean Emeritus of the Columbia School of Journalism, and author of the books, The Promised Land: The Great Black Migration and How It Changed America, and The Big Test: The Secret History of the American Meritocracy. He reviews the history, design, and purpose of the SAT and standardized assessments of academic merit, and how secondary schools and higher education institutions have used, or misused, tests as they relate to race and equality of educational opportunity. He offers thoughts on colleges’ and the American Bar Association’s recent shift away from standardized testing, and the impact on American education and society. Another topic they cover is the Great Migration, the movement of six million Black people from the American South to Northern, Midwestern, and Western states between 1910-1970. They explore the larger lessons about this pivotal episode in American history, and the social and educational policies that might help remediate our society’s ongoing racial struggles.

Stories of the Week: Co-hosts Cara Candal and Gerard Robinson discuss a school choice program in Michigan, that would have provided nearly $8,000 to help families with private school tuition or other expenses such as tutoring, but was vetoed by Gov. Gretchen Whitmer. Also, most education technology companies have seen a steep decline in valuation since the pandemic, defying many expectations that school closures would accelerate and expand the marketplace for digital learning.

The next episode will air on Weds., May 25th, with Patricia Puertas Rucker, a West Virginia state senator serving the 16th District, and chair of the Education Committee.

Nicholas Lemann served as Dean of Columbia Journalism School from 2003-13. Now Dean Emeritus and Joseph Pulitzer II and Edith Pulitzer Moore Professor of Journalism, he also directs Columbia Global Reports, a book publishing venture, and Columbia World Projects, a new institution that implements academic research outside the university. Lemann is a staff writer at The New Yorker. Widely published, he is the author of six books, including Transaction Man: The Rise of the Deal and the Decline of the American Dream (2019); Redemption: The Last Battle of the Civil War (2006); The Big Test: The Secret History of the American Meritocracy (1999); and The Promised Land: The Great Black Migration and How It Changed America (1991). He is a member of the New York Institute for the Humanities, the American Academy of Arts and Sciences, and The American Academy of Political & Social Science.

A School Choice in Michigan

It’s Been A ‘Brutal’ Year for Public Education Companies