They’re interesting and pretty harmless, with a tragic lifespan. After munching on tree sap underground for 17 years as slow-growing nymphs, they emerge, molt from their exoskeletons, fly around clumsily, noisily sing in the trees, mate, and die within about 30 or so days. At least the ones that don’t get eaten by birds, dogs, Cicada Killer Wasps, etc. And then their dying carcasses smell up the place.

I remember our first confrontation with them 34 years ago. My wife and I took off on northern Virginia’s Washington and Old Dominion bike trail, made impossible by the hoards of cicadas buzzing from tree to tree across our path and into our faces and hair. We’re ready for their return.

“Brood X cicadas synchronously emerge in large numbers as part of a predator satiation strategy. By coordinating their emergence, the sheer number of cicadas will allow for many to be eaten by predators while some of the population survives to procreate. Cicada predators include some birds, reptiles, amphibians, mammals, and other insects.”

But the United Nations is promoting that something or someone else become a predator or consumer: You. And it won’t be the first insect you’ve likely consumed. And I’m not talking about the occasional gnats that make their way into your digestive tract on long hot summer bike rides.

The UN’s Food and Agriculture Organization recently published a report on edible insects. National Geographic magazine was downright glowing in its description.

Stinkbugs have an apple flavor, and red agave worms are spicy. A bite of tree worm apparently brings pork rinds to mind.

This information will come in handy for those of us following the latest recommendation from the United Nations: Consume more insects.

A report released Monday by the U.N. Food and Agriculture Organization reminds us that there are more than 1,900 edible insect species on Earth, hundreds of which are already part of the diet in many countries.

In fact, some two billion people eat a wide variety of insects regularly, both cooked and raw; only in Western countries does the practice retain an “ick” factor among the masses.

Why eat something that we usually swat away or battle with insecticides? For starters, many insects are packed with protein, fiber, good fats, and vital minerals—as much or more than many other food sources.

I’m surprised it isn’t part of The Green New Deal. Some celebrities are promoting insect consumption. There is no shortage of organizations, websites, and posts that promote the benefits of insect consumption. And the world’s wealthiest man not only advertises insect protein powder on his famous website/marketplace, but he also walks the walk.

But the fact is that if you’ve consumed a processed food that is colored red or lists the natural food coloring “carmine” on the ingredient panel, you’ve consumed insects. Carmine derives from crushed cochineal. What is cochineal, you ask? It looks like this.

Yummy little bugger, no? But don’t worry. While the Food and Drug Administration has approved cochineal (Carmine) as a coloring for food, cosmetics (think lipstick), and medical supplies, given the occasional allergic reactions reported from it, many food companies have moved to plant-based alternatives, especially for you vegans. If Carmine in your food freaks you out, check the ingredient statement.

If you’re open to snacking on our new visitors, the Philadelphia Tribune offers some suggestions.

In 2004, Caroline Goon heard that the periodical cicadas that had just swarmed the D.C. area were edible. After considering different advice on how to eat them — with or without wings, headless or head on — the 20-year-old went to a tree near her apartment complex in Wheaton, Md., pulled a few adult cicadas off and gave them a quick fry. The result?

“I remember distinctly that at the time, it tasted like a crispy, salty-ish snack,” she says.

Perhaps you can dip them in chocolate for that “sweet-salty” fix that food makers believe that many of you crave. Sadly, however, cicadas don’t make National Geographic’s list of the top 8 insects you should consume. Beetles top the list; stinkbugs round it out.

I was surprised that crickets didn’t make the list since that seems to be the insect du jour right now, especially for protein powder. Unique, very sanitary cricket farms have emerged that cultivate these noisy insects for food. Raising crickets for food and feed might be a financial opportunity for you.

Need a cookbook for your new cuisine? Don’t worry, Amazon to the rescue. But there’s one new thing we’ve learned anew – that lard, once the bete noire of food byproducts, is off the naughty list. Not for vegans, of course, since lard comes from pigs. Maybe toss those cicadas in the skillet with a bit of lard (lower in saturated fat than butter), a pinch of salt (not too much!), and a little garlic, and presto! Perhaps serve with a bit of pesto, or have some hummus nearby. It might even qualify for the FDA’s forthcoming “healthy” symbol.

Yum. Welcome to your “new normal,” especially for the forthcoming “climate emergency.” But you’ll have to remove your mask to enjoy them. 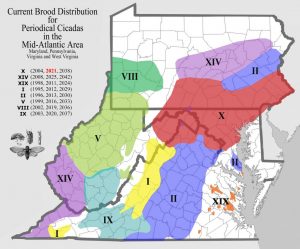