Scott has consistently repeated that America is not a racist country (while admitting, as do I, that racism and racists exist) on multiple occasions. He said it again last night during his response to President Biden’s speech before a surreal, sparsely attended, socially distanced, and heavily-masked gathering of vaccinated Members of Congress and Biden Cabinet members, among a few others.

It did not take long for #UncleTim to trend on Twitter. If you’re on Twitter, go to the search field and type that, hit return, and see what shows up. Here’s an example: 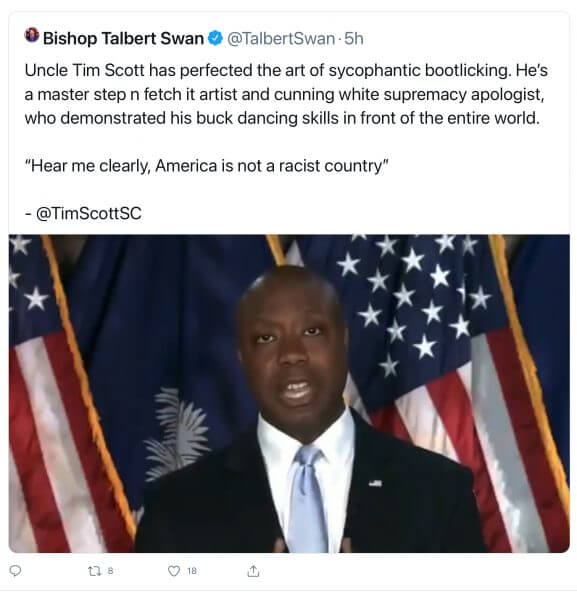 So, it turns out to be true. Systemic racism in America IS real. It is just not from whom you think are racists. Read Bishop Swan’s Twitter feed for more examples of angry, race-based screeds. 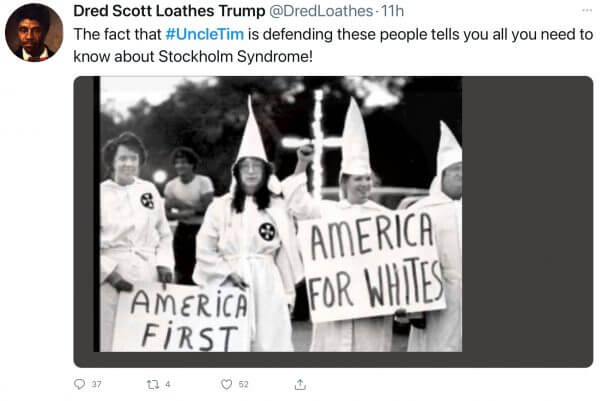 “Hateful conduct: You may not promote violence against or directly attack or threaten other people on the basis of race, ethnicity, national origin, caste, sexual orientation, gender, gender identity, religious affiliation, age, disability, or serious disease. We also do not allow accounts whose primary purpose is inciting harm towards others on the basis of these categories.

“Hateful imagery and display names: You may not use hateful images or symbols in your profile image or profile header. You also may not use your username, display name, or profile bio to engage in abusive behavior, such as targeted harassment or expressing hate towards a person, group, or protected category.

‘Twitter’s mission is to give everyone the power to create and share ideas and information, and to express their opinions and beliefs without barriers. Free expression is a human right – we believe that everyone has a voice, and the right to use it. Our role is to serve the public conversation, which requires representation of a diverse range of perspectives.

“We recognize that if people experience abuse on Twitter, it can jeopardize their ability to express themselves. Research has shown that some groups of people are disproportionately targeted with abuse online. This includes; women, people of color, lesbian, gay, bisexual, transgender, queer, intersex, asexual individuals, marginalized and historically underrepresented communities. For those who identify with multiple underrepresented groups, abuse may be more common, more severe in nature and more harmful.

“We are committed to combating abuse motivated by hatred, prejudice or intolerance, particularly abuse that seeks to silence the voices of those who have been historically marginalized. For this reason, we prohibit behavior that targets individuals with abuse based on protected category.”

I guess these don’t apply to hateful or abusive comments directed at a US Senator who is not only a “Person of Color” (POC), but is a Republican. Or perhaps because of it.

Americans are increasingly learning about “critical race theory” (CRT), which is behind this new racism. Thanks to independent authors, media producers, researchers, and writers like Christopher Rufo and James Lindsay we are discovering just how different critical race theory is from what the late Dr. Martin Luther King gave his life for – a colorblind society. You know the thing.

CRT is the belief that America is built on a bedrock of white supremacy. America was founded, allegedly, to protect Black slavery. CRT teaches us that we are not to be treated and respected as individuals, but as members of a race, or a group. We are told that white people are, by virtue of their skin color, oppressors. People of color are, by virtue of their skin color, victims of that oppression – the oppressed.

And this has now been extended into other categories, including gender, age, income, and even your native or first language. Your intersectionality score determines your degree of victimhood.

Do you really think demands for reparations will stop at race?

Critical race theory has become ubiquitous in American society, from our schools and churches to our workplaces, where we are treated to mandatory “unconscious bias training,” all under the rubric of “diversity and inclusion.” And we’ve seen it manifest itself in several ways. Ultimately, buying into CRT means you’re “woke.” The irony and hypocrisy at fighting racism with racism is completely lost on these true believers.

For the record, “diversity” and “inclusion” are fine. Heaven and Hell are both going to be diverse and inclusive for very different reasons.

Perjorative outbursts directed Wednesday night at Senator Scott are just the latest manifestation of woke-ism. It is all too predictable, especially now that the masks are off. Christopher Rufo:

In September 2020, then-President Donald Trump signed an executive order banning federal agencies and contractors from conducting training sessions based on critical race theory. Specifically, the order banned “race or sex stereotyping,” “race or sex scapegoating,” and teaching that “an individual’s moral character is necessarily determined by his or her race or sex.” In short, the executive order made sure that all training sessions complied with the basic framework of the Civil Rights Act of 1964: there is no place for racism in the federal government.

In a healthy society, this would be uncontroversial. After all, until just recently, Americans of all political backgrounds seemed to agree that racial stereotyping, scapegoating, and harassment are unacceptable, especially in the workplace. However, with the rise of the academic movement known as critical race theory (CRT), progressives in academia and the bureaucracy have revived the ugly concepts of race essentialism and race-based guilt, arguing that white Americans can be reduced to the quality of “whiteness” and must undergo rigorous reeducation to atone for their inborn “white privilege,” “white fragility,” and “internalized racial superiority.”

Joe Biden and Kamala Harris reversed Trump’s executive order immediately upon taking office. This was a fulfilment of their campaign promises to stress “equity” and oppose “race-neutral policies.” Articles have proliferated in the press celebrating this reversal of Trump’s supposedly “damaging” and “harmful” “position on racism.”  The Biden/Harris regime has embraced the philosophy of critical race theory, which explicitly rejects the American principles of individual rights, meritocracy, and equality under the law. This administration has shown itself committed to apologias for CRT, and we can expect much more of the same in the years to come.

So thanks to Joe Biden and Kamala Harris, among others, CRT is back with a vengeance, and your tax dollars are being used to promote it. It is time to fight back. And it starts with acknowledging that critical race theory is systemic racism, defined, and calling it out when practiced. Name it and shame it.