A little history. In 1832, President Andrew Jackson (with support from former President Thomas Jefferson), forced five major eastern Native American tribes to relocate to Oklahoma Indian Territory – Cherokee, Chickasaw, Choctaw, Creek and Seminole. They were promised the land in perpetuity. One of those tribes, the Seminoles, resisted, resulting in a brief war. Thousands died on the “Trail of Tears” from Georgia, North Carolina, Alabama, and Florida to their new lands. Other tribes joined them. Most of their lands encompass eastern and southern Oklahoma.

Most Oklahomans, at least at one time, have lived in one of these lands. My home town was part of the Chickasaw Nation. I also lived on land once reserved for the Cherokee and the subject of today’s court ruling, the Creek.

You have to wait to read until Chief Justice Roberts’ dissent to get to what I consider the most interesting aspect that appears to have been largely ignored by the majority. When southern states seceded from the Union, confederate General Albert Pike (Arkansas) approached the five major tribes about aligning with the confederacy. With the memories of the “Trail of Tears” along with the reality that those tribes owned some 8,000 slaves, they all eventually aligned with, and fight for, the confederacy.

In fact, the very last Confederate general to surrender, in late June 1865, was Stand Watie – A Cherokee – long after Gens. Robert E. Lee and Joseph E. Johnston, both of which occurred in April 1865. I guess he never got Lee’s and Johnston’s text messages. 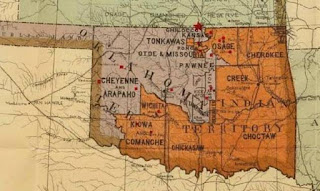 In 1866, the U.S. Government told the rebellious tribes that their treaties were going to be “renegotiated.” Slavery was ended, and their lands were eventually opened up for settlement, starting in 1889 with the “Oklahoma land run.” My ancestors participated in the second land run, in 1891, that included Lincoln County (Chandler). The tribal nations were allowed to exist, including their own executive, legislative, and judicial systems, but their jurisdiction was limited to members of their tribes.

And that was the nub of today’s decision. Jimcy McGirt was prosecuted and found guilty in state court on three charges of sexual assault (raping his great-granddaughter). He argued, post-prosecution, that because he was a member of the Seminole tribe and committed his crimes in Creek Nation “territory,” he should be prosecuted only in federal court. There have been some 1,700 Indian tribal members convicted of crimes by states courts, this today’s decision could set them free. Some 10 percent of the residents within the old Creek Nation boundaries are actual tribal members.

It doesn’t mean Indian reservations are back (nor, hopefully, slavery or support for the confederacy). But wow, it scrambles the legal and penal systems in Oklahoma, and I bet other states that are home to Indian lands and tribes are paying some attention (unlike Oklahoma, their tribes mostly have actual reservations lands). Many of the casinos in these states and others are owned and operated by Indian Nations. Including those in Oklahoma.

Social justice warriors are relatively silent on the matter, thus far, with no celebrations for the return of “stolen land” or whatnot. Not a word yet from famous former Oklahoman and cultural appropriator (and possible Vice President) Elizabeth Warren. History is a little hard or complicated for them, it seems.