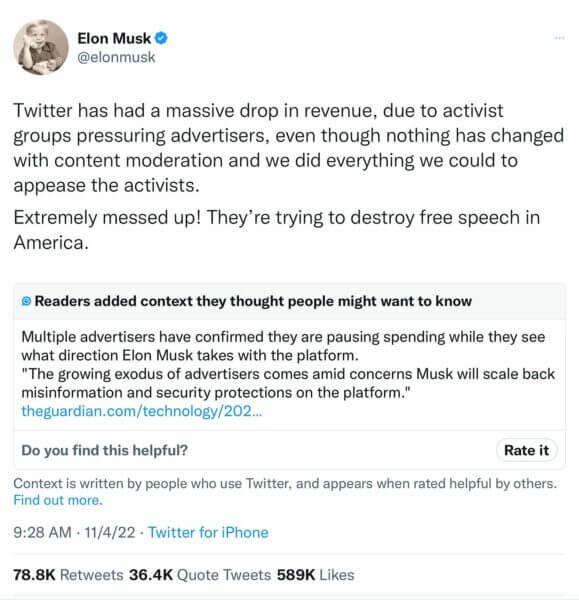 Which advertisers, pressured by whom? Let’s start with the first half of that question, answered in part by the Wall Street Journal and Forbes, among others. Many companies aren’t trying to hide it in what they may believe is a virtue signal.

Twitter owner Elon Musk’s plan to right the social media company’s financial ship while also loosening its content moderation rules could face early headwinds, with several large companies taking a pause on Twitter ads until they have a fuller view of how the platform will look under his leadership.

NAACP President Derrick Johnson called for all companies to pull ads from Twitter on Friday, tweeting it is “highly destructive to our democracy for any advertiser to fund a platform that fuels hate speech, election denialism and conspiracy theories”

The Wall Street Journal reported Thursday that General Mills, Pfizer, Audi, Volkswagen and Mondelez International Inc.—the maker of Oreos—stopped advertising on Twitter after Musk took over the company, in part due to concerns about how Twitter will moderate content.

Automakers Ford and General Motors told Forbes last week they will not be buying ad space on Twitter until they better understand the platform’s future.

While mainstream outlets like Forbes and the Wall Street Journal took no time to find out who, or what, was behind the advertising pullback, it didn’t take rocket science to figure it out. The New York Post gave us a big hint last May 4 when news of Musk’s Twitter takeover took flight.

Elon Musk is demanding to know who was behind a letter signed by more than two dozen liberal groups that has urged advertisers to boycott Twitter if he completes his takeover of the social media giant.

Left-leaning NGOs — whose backers include billionaire financier George Soros and former Clinton operatives, as well as the European Union and the Canadian government — are urging a boycott of Twitter if Musk takes over the company.

“Who funds these organizations that want to control your access to information? Let’s investigate …,” Musk tweeted on Tuesday.

He added that “Sunlight is the best disinfectant.”

The letter, which was signed by 26 organizations, claimed that “Elon Musk’s takeover of Twitter will further toxify our information ecosystem and be a direct threat to public safety, especially among those already most vulnerable and marginalized.”

“Under Musk’s management, Twitter risks becoming a cesspool of misinformation, with your brand attached, polluting our information ecosystem in a time where trust in institutions and news media is already at an all-time low,” the letter added.

“Your ad dollars can either fund Musk’s vanity project or hold him to account. We call on you to demand Musk uphold these basic standards of community trust and safety, and to pull your advertising spending from Twitter if they are not.”

Accountable Tech is a Washington, DC-based organization linked to top Democrats. Jesse Lehrich, a co-founder, once served as a spokesperson for Hillary Clinton’s presidential campaign. He is also the nephew of former Obama adviser David Axelrod.

Media Matters for America is an organization founded by political operative and Clinton backer David Brock. MMFA is a site “dedicated to comprehensively monitoring, analyzing, and correcting conservative misinformation in the U.S. media.” 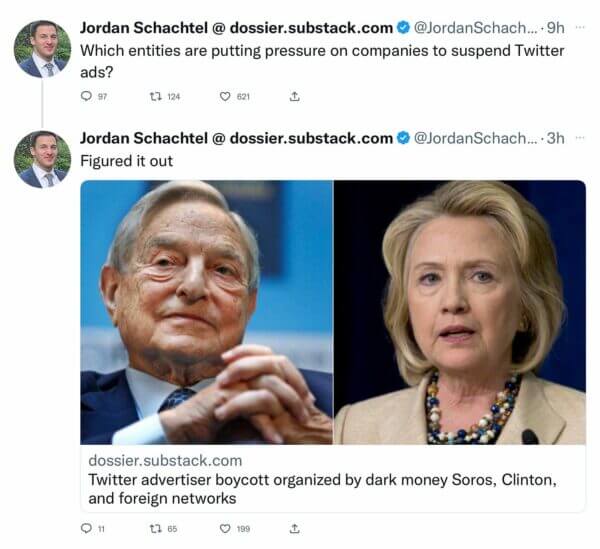 A little more about Accountable Tech, courtesy of the Capitol Research Center:

Accountable Tech is a left-of-center advocate for restrictions on free speech on online platforms. The group was created as a fiscally sponsored project of the North Fund, which is part of the advocacy nonprofit network managed by Arabella Advisors.

Accountable Tech is notable for rallying major advertisers against Elon Musk after he offered to purchase Twitter in 2022.

Accountable Tech since joined Onward Together, Hillary Clinton’s political advocacy group established after her defeat in the 2016 presidential election. Co-founder Jesse Lehrich is a former spokesman for Clinton during her 2016 presidential campaign.

And who is Arabella Advisors? They’re no small potatoes. In fact, they are one of the largest and most influential left-wing political organizations in the world. The Capitol Research Center, again:

Arabella Advisors (commonly called “Arabella”) is a philanthropic consulting company that guides the strategy, advocacy, impact investing, and management for high-dollar left-leaning nonprofits and individuals. Arabella provides these clients with a number of services that ease their operations and that enable them to enact policies focused on environmentalism and other left-of-center issues. The company was founded in 2005 by Eric Kessler, a Clinton administration alumnus and long-time staffer at the League of Conservation Voters who remains a senior managing partner and principal at the firm.

Arabella Advisors manages four nonprofits that serve as incubators and accelerators for a range of other left-of-center nonprofits: the New Venture Fund, the Sixteen Thirty Fund, the Hopewell Fund, and the Windward Fund. These nonprofits have collectively hosted hundreds of left-wing policy and advocacy organizations since the network’s creation (referred to by critics as “pop-up groups” because they are little more than websites.) A fifth nonprofit, the North Fund, is significantly funded by Arabella’s nonprofits, is housed at the company’s address, and pays Arabella consulting fees.

Altogether, between 2006 and 2020 Arabella’s network reported total revenues of $4.7 billion and total expenditures of $3.3 billion. A January 2020 profile of Arabella Advisors’ network by Inside Philanthropy noted that the company “handles over $400 million in philanthropic investments and advises on several billion dollars in overall resources.”

These funds originate primarily with major left-of-center foundations and individual donors, not with the company Arabella Advisors, and are controlled by the nonprofits, which in turn “hire” Arabella Advisors to consult in exchange for a fee. Many of Arabella’s top officials, including firm founder Eric Kessler and former managing director Bruce Boyd, are current or former principal officers on the nonprofits’ boards of directors. Between 2008 and 2020, Arabella’s nonprofits paid the company over $182 million in contracting and management services fees.

Arabella’s nonprofit network has implemented over 300 different “pop-up” projects targeting a range of issues, including net neutrality, free speech, abortion access, Obamacare, and President Donald Trump’s judicial nominees, and was highly active in funding pro-Democratic Party advertisements in the 2018 and 2020 elections. Its groups were also active in trying to manipulate the outcome of the 2020 U.S. Census in left-leaning states and the subsequent 2021-22 redistricting process, when state legislative and congressional districts were redrawn by state legislatures. Multiple former Arabella employees have also been traced to the Biden administration.

Arabella’s playbook and clout are all too familiar now. They pressure vulnerable, if not woke, consumer goods companies to withdraw advertising dollars or fire disfavored people. Some companies are happy to play along, including the weak-minded at more-than-cereal giant General Mills and global snack food behemoth Mondelez. Left-wing Media Matters monitors conservative bloggers and broadcast shows, pouncing at every opportunity to discredit them, often deviously. They and allied organizations can launch massive e-mail campaigns targeted at corporate executives, often featuring phony accounts (“bots”) with similar short messages and identical formats. I’ve experienced it.

And that’s not all. Speaking of “fake news,” Capitol Research Center has more:

The nonprofit watchdog OpenSecrets (published by the Center for Responsive Politics) reported in May 2020 on Arabella’s involvement in numerous “fake news sites,” pouring millions of untraceable dollars into advertisements and other digital content “masquerading as news coverage to influence the 2020 election.”

States Newsroom, which runs another network of left-wing “fake news” websites, was originally created as “Newsroom Network,” a project of the Arabella-run 501(c) Hopewell Fund. In June 2019, States Newsroom was spun off as an independent nonprofit with its own 501(c)(3) tax-exempt status, but a number of its local affiliates are used by the Hopewell Fund as its own legal aliases.

I guess these groups see Musk as a threat to their fake news scam. The “old” Twitter was more to their liking, apparently.

Jordan Schachtel, who blogs at Dossier.Substack.com, answers the obvious question for those who “follow the money:”

So who funds Arabella?

A significant chunk of the group’s cash also comes from overseas. Hansjörg Wyss, an 87 year old far-left Swiss billionaire who does not appear to be an American citizen, has given over $135 million to the fund, The New York Times reported. Nicole Gill, the co-founder of Accountable Tech, was previously a director at the Wyss-financed The Hub Project.

With elections right around the corner, Accountable Tech is acting exactly as intended. It is a left wing intimidation machine that seeks to censor speech, with hopes to leverage a decline in advertising dollars to revert Twitter back to its pre-Musk form, as a state-sponsored machine for institutional narrative advancement and political suppression.

Soros isn’t content with underwriting the election of soft-on-crime non-prosecutors like Philadelphia’s Larry Krasner or Los Angeles’ no-cash-bail George Gascon. Nor is he content with electing soft-on-crime liberals like Pennsylvania’s Democratic nominee John Fetterman as the single largest donor to Democratic campaigns in the 2022 election, at $126 million. Soros calls his largest organization the Open Society Foundation. We now know that means open jails and borders. His organizations have indirectly funded migrant caravans to the United States, as documented by Michelle Malkins’s superb book Open Borders, Inc.

Soros, his allies, and minions are not just after Elon Musk. Soros also happens to compete in the electric car space, too. Musk owns Tesla while Soros invests in Rivian. He and his minions are also after your freedom of speech.

Other than admiration for his intellect, innovation, and success, I didn’t pay much attention to Elon Musk prior to his play for Twitter. I’m not interested in buying an electric car. And at first, I found his purchase of the social media juggernaut, a favorite of blue-bubble journalist, amusing. Like many, I applauded and wished him well. I like his ideas and have proposed a few of my own to reform the site. I’m happy to pay $8 for a blue check. Maybe more.

Don’t just vote on Tuesday. Vote with your dollars. Everyday.

Recommended reading: The Man Behind the Curtain, by Matt Palumbo

Disclosure. I am a proud financial supporter of the Capital Research Center. You can find me at Twitter, no longer anonymous, at @KHostages