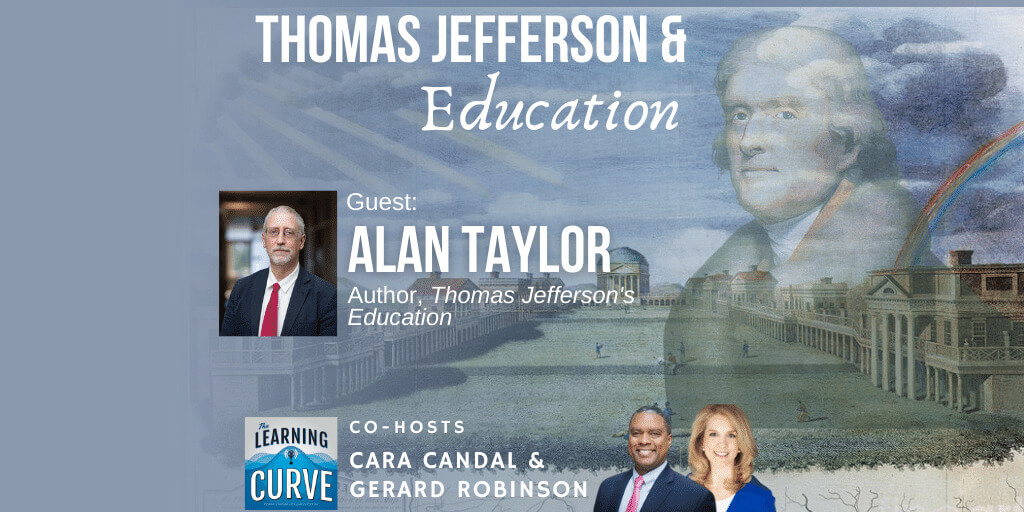 This week on “The Learning Curve,” co-hosts Cara Candal and Gerard Robinson talk with Alan Taylor, the Thomas Jefferson Memorial Foundation Professor of History at the University of Virginia, a two-time Pulitzer Prize winner, and author of the book, Thomas Jefferson’s Education. Professor Taylor shares some highlights of Jefferson’s career, his views on the importance of primary and higher public education in serving the political aspirations of his state and region, and Jefferson’s role as the architect of the University of Virginia, whose buildings embody his Neoclassical outlook. Professor Taylor reviews Virginia’s complex, 18th-century history as the most politically influential, populous, and wealthiest state, but one that was heavily dependent on agriculture and slavery. The interview concludes with Professor Taylor reading from his book on Jefferson.

Stories of the Week: A Washington Post column raises concerns about data showing that we are under-educating our children through low academic expectations, especially those from low-income and minority backgrounds. In Wisconsin, Act 31 requires that K-12 public schools instruct students in the history of the state’s Native Americans – but some estimate that less than half of the schools are implementing it.

Alan Taylor is the Thomas Jefferson Memorial Foundation Professor of History at the University of Virginia. He taught previously at the University of California, Davis and Boston University. Taylor has authored eleven books, including in 2019 Thomas Jefferson’s Education and The Internal Enemy: Slavery and War in Virginia: 1772-1832, which was a National Book Award for Nonfiction finalist in 2013 and won the 2014 Pulitzer Prize in History. His book William Cooper’s Town: Power and Persuasion on the Frontier of the Early American Republic won the 1996 Bancroft, Beveridge, and Pulitzer prizes. Taylor is a graduate of Colby College and received his Ph.D. from Brandeis University.

The next episode will air on Weds., August 31st, with Angel Adams Parham, Associate Professor of Sociology and senior fellow at the Institute for Advanced Studies in Culture (IASC) at the University of Virginia, and the author of The Black Intellectual Tradition: Reading Freedom in Classical Literature.

The American Innovation webinar series celebrates America's legacy as a land of tinkerers and engineers by showcasing the American inventions and inventors that have shaped our everyday life.

Why won’t schools challenge their students? – The Washington Post