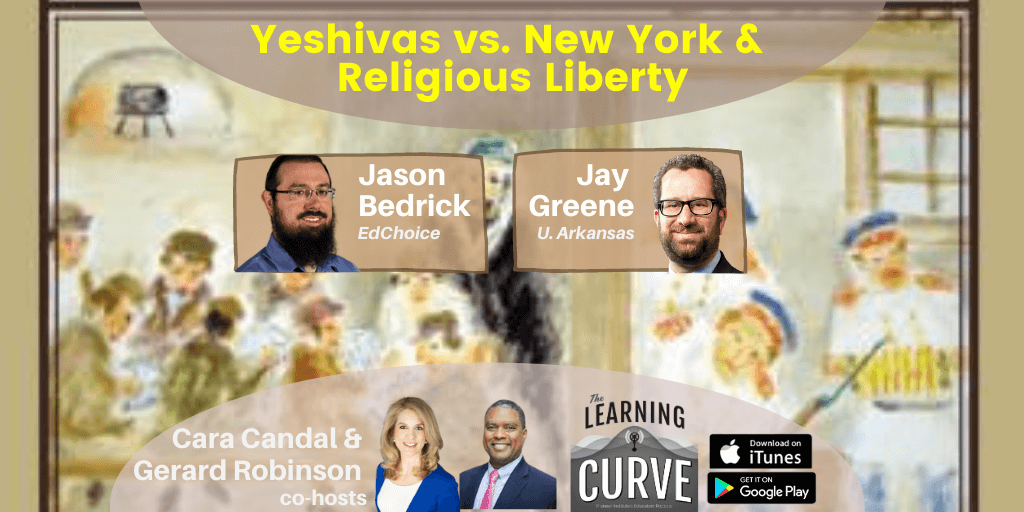 This week on “The Learning Curve,” Cara and Gerard are joined by Jay Greene, the Distinguished Professor and Chair of the Department of Education Reform at the University of Arkansas, and Jason Bedrick, the Director of Policy for EdChoice. They discuss their timely new book, Religious Liberty and Education: A Case Study of Yeshivas vs. New York, about the recent battle between Orthodox Jewish private schools and New York’s state government over the content of instruction. They explain “substantial equivalency” statutes and their potential impact on a wide array of private and religious schools, as well as on parental rights, K-12 education policy, and religious liberty in America. Bedrick and Greene draw comparisons between substantial equivalency regulations and the bigoted, 19th-century Blaine Amendments that were recently weakened as a result of the landmark Supreme Court decision in Espinoza v. Montana Department of Revenue. They express concerns about growing interference by state departments of education, regardless of the paltry level of funding they distribute to private schools through Title I, the Individuals with Disabilities Education Act, or other programs.

Stories of the Week: In Baltimore, the school district has formed a promising partnership with the Recreation & Parks office to give more than 1,000 students in-person access to their virtual learning lessons, in small cohort groups meeting in schools and rec centers. A New Hampshire town tuitioning program offers financial support to rural families who choose secular private schools for their children – but not to those choosing religious options. In the wake of the recent U.S. Supreme Court decision in Espinoza v. Montana Department of Revenue, does that distinction still pass constitutional muster?

Jason Bedrick is Director of Policy for EdChoice. Previously, Bedrick served as policy analyst with the Cato Institute’s Center for Educational Freedom. He also served as a legislator in the New Hampshire House of Representatives and was an education policy research fellow at the Josiah Bartlett Center for Public Policy. Bedrick received his master’s degree in public policy from the John F. Kennedy School of Government at Harvard University, where he was a fellow at the Taubman Center for State and Local Government.

Jay Greene is Distinguished Professor and Chair of the Department of Education Reform at the University of Arkansas. Greene’s current areas of research interest include school choice, culturally enriching field trips, and the effect of schools on non-cognitive and civic values. His work has been published in journals from a diverse set of disciplines, including education (Educational Researcher), sociology (Sociology of Education), public policy (Education Finance and Policy), psychology (Psychology of Music), political science (British Journal of Political Science), and economics (Economics of Education Review). Greene has also written or edited three books. His research on school choice was cited four times in the Supreme Court’s opinions in the landmark Zelman v. Simmons-Harris case. Greene has been a professor of government at the University of Texas at Austin and the University of Houston. Jay received his B.A. in history from Tufts University and his Ph.D. from the Government Department at Harvard University.

Lech Wałęsa, founder of the Polish free trade union Solidarity and former president of Poland, on his career and his country, forty years on from the uprising that set that career in motion https://t.co/B9LJb54xif

*NEW DAY, NEW TIME!*
Season Two of “The Learning Curve” airs on Wednesdays at 12 pm ET each week.
The next episode will be available on Wednesday, September 16th, 2020 with Kelly Smith, Founder and CEO of Prenda.