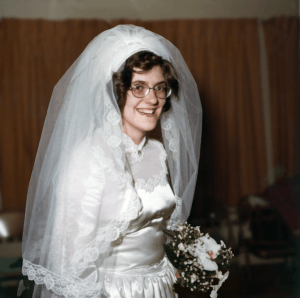 Janet on our wedding day.

On May 7, 1977, I married my spouse of over 40 years, Janet. Longtime members of Ricochet might remember her as Quilter.

It was a May wedding, and May weddings are supposed to be unlucky. They are not supposed to last. I could make a case that both were true. It did not last as long as either of us would have wanted. Only 40 years, nine months, and three days.

It would have happened a week earlier, in April, except for the accident of the day of my wife’s birth, May 4, 1958. The two Saturdays available at my Church were April 30 and May 7. My soon-to-be mother-in-law did not want her daughter getting married at age 18. She pushed Jan to pick May 7, since she would be 19.

I was then 21. Getting married that young was less unusual than it is today, but not as common as when my parents and their siblings had married twenty years earlier. Yet it was unusually young in both families. My in-laws got married when they were in their late 20s and early 30s. My father was 28 and my mother 22 when they married. My uncles and aunts married later than that.

But Jan and I had known each other for seven years when we got married. She was the kid sister of a good friend in high school. The two of us became acquainted and eventually friends over wargames and role playing games. Good friends, because we fit each other. While we did not start dating until I was in college, it did not take much longer after that for us to decide we should take our relationship to marriage.

She was very good looking. Surprisingly for a teen-aged boy, I really did not notice. What I did notice was her intelligence, her loyalty, and her good judgment. I valued her for those. What she saw in me I don’t know. What I do know is how lucky I was to have her want me.

We were the first children in our respective families to get married – and the first among the children of my parents’ siblings. That made it a major milestone event for my parents’ generation and for my generation.

It was a surprisingly frugal wedding. Jan and I had virtually nothing and neither of us was willing to impose lavish demands for financial support for the wedding from our parents. We felt it to be our entry into life as adults. We both had jobs and were living on our own (while being full-time college students). My parents arranged for the church (Jan and I were getting married at my church, because we both saw  marriage as more than just a civil ceremony.) My mother-in-law made the bridal gown and the bridesmaids’ dresses. The men wore suits instead of tuxedos.

My younger brother was my best man. My brother-in-law and a first cousin were groomsmen.  My wife’s best friend was maid-of-honor, her first cousin, and another school friend, Rose, the bridesmaids. 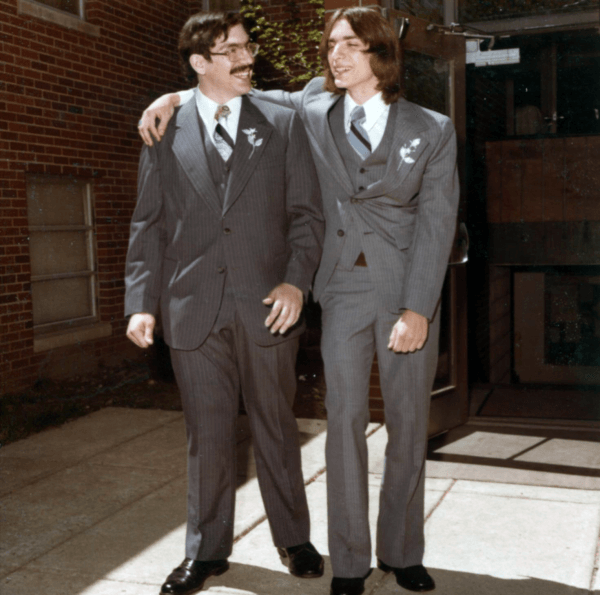 Me (left) and my best man (right), my younger brother

My wife’s family was Methodists – dry Methodists. My family was Greek Orthodox. It was like My Big Fat Greek Wedding, only in reverse. Although my mother-in-law had one sister, my father-in-law had six brothers – and most of the brothers came. So did most of my parents’ siblings.  It was the first wedding for my generation and everyone wanted to come to the raree show.

It was also the last major family event at which all of my grandparents were present. Death would soon start taking them in the subsequent years. 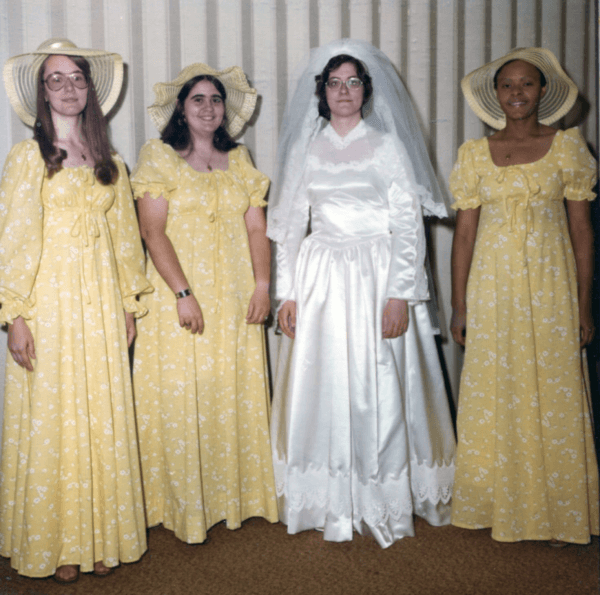 Janet and her party. My mother-in-law made the gowns.

The things I remember most were the funny things. My mother-in-law learned that her niece was so delighted with her bridesmaid’s dress she wanted to wear it to her high school prom – which was before the wedding. Somehow final adjustments for the dress were not complete until after the prom had taken place.

My brother, holding the crowns over our heads as we went three times around the altar (an Orthodox tradition that suitably impressed my wife’s Methodist family) managed to step on Janet’s train. Suddenly Janet’s grip on my had became stronger, as she and I worked to keep her from falling. 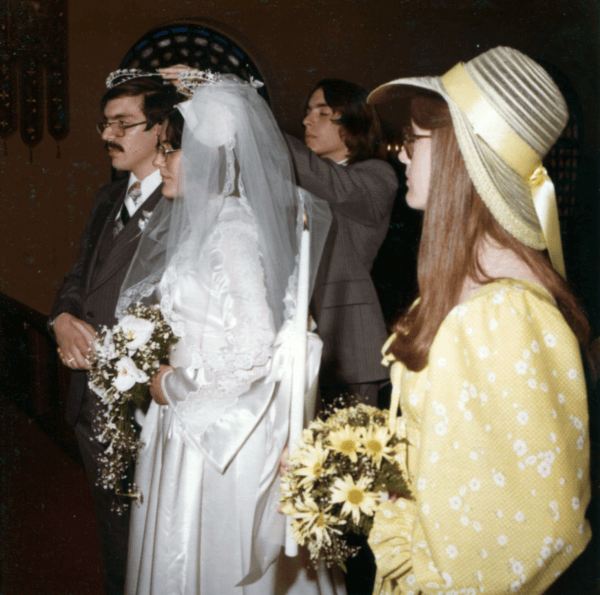 Our “trip” around the altar

Taking photos of the wedding party turned out to be like herding cats. We got photos of the entire party, but I don’t think we got a photo of everyone together.

My uncle asked which car we would be taking to leave the church. The disreputable and ancient Ford Mustang my wife owned and which we used had been exiled from the wedding and we would be borrowing one of my parent’s car. I told my uncle we were taking the Volvo. He then disappeared chortling. Jan gave me a puzzled look when I said that, but was unwilling to contradict me, especially when I pushed on her shoe with my toe.

After my uncle left, she said, “I thought we were taking the Datsun?” “We are,” I replied.  “But why did you tell him the Volvo?” “Later. It’s bad luck to talk about.” She must have thought me strange (although I am sure I gave her plenty of clues how strange I was before we got married, but she had enough faith in me to drop the subject.

And the two of us drove off in the Datsun, while my parents, grandparents, and younger brother left in a Volvo decorated with tin cans and “Just Married” soaped on the windows.

It turned out getting married May 7th was a bad idea for a reason unanticipated by our parents. Forever after our anniversary celebrations had to compete with Mother’s Day. Flower prices shot up, as did restaurant prices just before our anniversary. The restaurants where we wanted to go were frequently booked up by Mother’s Day celebrants. Frequently we held our celebration at home, with steaks on the grill.

I look back on that day today and can only think how young and naïve we were then. I better appreciate my parents’ anxiety through the lens of experience.  Yet we made it work. We had good times and bad times, and although there were many times we fought we always had each other’s back. Along the way, we found jobs and lost jobs, and found new jobs and had three sons which grew into fine men.

However hard the forty years that followed would occasionally become we had each other. We each had someone we could trust utterly and which we knew trusted the other utterly.

We were through the worst of the travails married couples have economically and in raising a family. The boys were grown and out of the house, starting their own careers, and finally giving us time for each other.  Then she got cancer.

We fought it for two years. Bad timing and ill fortune led us to lose that struggle. I threw everything we had into it. In the end, it wasn’t enough. She died as I held her hand.

Despite the pain of our parting, it was the price for the forty years we had together, a journey we started 43 years ago today.

I plan to visit her grave today. I know how lucky I was to have had those forty years together.