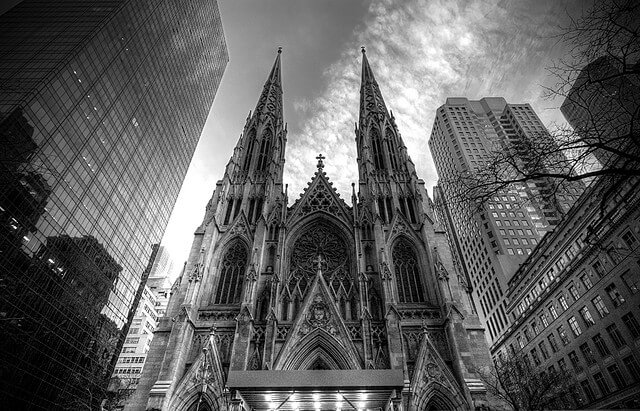 I think most people would agree that this limited exposure to music of centuries past is better than none.  But the downside is that the circumstances of one’s introduction to a song or another work of art can form unfortunate associations which are difficult to shake.  When I hear Wagner’s brilliant “Flight of the Valkyries”, do I think of Norse warriors?  Of course not.  I think of Elmer Fudd and of vacuum cleaners.

Associations can also affect the way we perceive paintings, sculptures, architecture, or literary fiction.  And those associations are not always detrimental.

Had I first seen the film Cast a Giant Shadow at any other time, I doubt the story of impossible military challenges during the formation of Israel would have moved me as much.  My memory of St Patrick’s Cathedral might have become jumbled with other cathedrals if not for the stark contrast of its Gothic architecture amid the giant square skyscrapers of New York City which were equally new to me at the time.

Are unpleasant associations more powerful or more enduring than pleasant ones?  I know a woman who emphatically objected when her husband began to sing “You Are My Sunshine” to their young daughter because the woman’s own mom had woken her with that song every morning throughout those sleepy teenage years.

What are some of your own mnemonic associations with songs and other art?  Are they all bad?  Or have any heightened your appreciation?

Have those associations affected how you expose your children favorite works?  Do you only try to affect their positive associations or do you attempt to dissuade them from hated works as well?