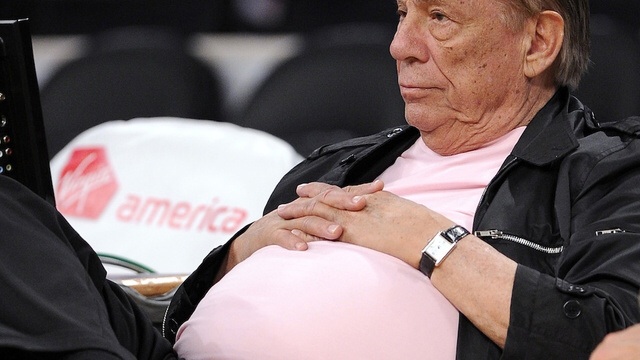 I am banning Mr. Sterling for life from any association with the Clippers organization or the NBA. Mr. Sterling may not attend any NBA games or practices. He may not be present at any Clippers facility, and he may not participate in any business or player personnel decisions involving the team. He will also be barred from attending NBA Board of Governors meetings or participating in any other league activity.

I am also fining Mr. Sterling $2.5 million, the maximum amount allowed under the NBA constitution. These funds will be donated to organizations dedicated to anti-discrimination and tolerance efforts that will be jointly selected by the NBA and its Players Association.

As for Mr. Sterling’s ownership interest in the Clippers, I will urge the Board of Governors to exercise its authority to force a sale of the team and will do everything in my power to ensure that that happens.

I was vaguely aware of the NBA Constitution, but it had never been published anywhere before yesterday. It certainly does give the commissioner the right to fine an owner. This isn’t even the largest fine that’s been levied — the ownership of the Minnesota Timberwolves was hit for $3.5 million for violating league rules in signing free agent Joe Smith. And the NBA has fined numerous players for conduct unbecoming or detrimental to the league (Dennis Rodman’s sin in the 1997 NBA Finals was to say Mormons in Utah had put him “out of sync” — the quote includes a modifier for the noun Mormons that I’m not allowed to use. He was fined $50,000, but not suspended; it was, after all, the Finals.)

The fine will stand, though it wouldn’t have been enough of a punishment on its own given the gravity of the situation. The lifetime ban is severe, but not without precedent in other leagues. The NBA has used it as well, banning Roy Tarpley for substance abuse in 1995, and exiling Connie Hawkins and Ralph Beard for point shaving back in the dark ages.

But force an owner to sell? There are only two precedents I could recall. Marge Schott is the one people remember, forced to sell Major League Baseball’s Cincinnati Reds after suggesting that Hitler just got carried away and wasn’t such a bad guy. The other is Eddie DeBartolo, whose fraud conviction eventually led to a suspension from the NFL and giving up control of the San Francisco 49ers to his sister. He did so under duress from the league and has since expressed regret that he gave in.

Those cases have two crucial differences from Sterling. Major League Baseball has a full antitrust exemption, so the other owners could simply tell Schott that they wouldn’t schedule games against the Reds if she didn’t give up the team. The NBA doesn’t have that kind of protection, and 29 owners conspiring against one other owner is very suspect (Ask Al Davis). Meanwhile, DeBartolo committed a federal crime and pled guilty (he paid a $1 million fine and was subject to two years of probation for a bribe in Louisiana.)

No such case exists with Sterling; what he said was disgusting but not illegal. Still, there’s that constitution, which says in Article 35A, section (d):

The Commissioner shall have the power to suspend for a definite or indefinite period, or to impose a fine not exceeding $1,000,000, or inflict both such suspension and fine upon any person who, in his opinion, shall have been guilty of conduct prejudicial or detrimental to the Association.

I still haven’t figured out the $2.5 million part, but the lifetime ban appears to be “suspend for an indefinite period.” I doubt there will be much argument over the $2.5 million.

Can the NBA do to Sterling what MLB did to Schott and what DeBartolo agreed to do with the NFL?  There will be buyers lining up (the Wall Street Journal reports tonight that David Geffen is interested) and the team Sterling bought for $12.5 million in 1981 will sell for well more than the $535 million it was last valued at by Forbes. But Sterling could decide to fight the revocation of his membership in the league and perhaps restraint of trade.

What makes this so interesting is that NBA Commissioner Adam Silver only recently replaced David Stern. The latter was considered the most powerful sports commissioner in the world, long criticized for overstepping his authority with players. He had no problem picking new owners, pressuring old ones to sell (George Shinn in New Orleans being the best example) and generally making everyone follow his vision of the Association. And it worked; the league grew and made more money, so owners accepted his excesses as the price of getting those enormous television contracts and lucrative licensing fees. Silver doesn’t have that kind of reputation yet, and if Sterling decides to send the lawyers after him to test his mettle, it will be interesting to watch whether the other 29 owners will be there to write the checks to pay for the defense.