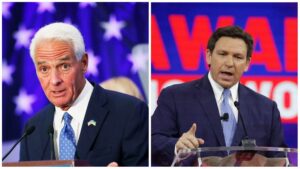 The debate the other night between Republican Gov. Ron DeSantis and former Gov. Charlie Crist offered actual meat coming from Gov. DeSantis, with the new fake plant-based meat coming from Crist. We’ve lived in Florida long enough to have lived under both governors. DeSantis delivered answers that belong to a real governor. He answered questions directly, based on real-life issues, both state and national, and his policies. For example:

He believes in teaching children the basics — math, reading, writing, history — and not distorting their young, fragile minds with confusing gender ideology, race-baiting, planet-worshiping, or any of today’s trends that young children should not be subjected to. He made it clear that parents decide their child’s health, which includes vaccines, their mental and emotional well-being, and their gender identity.

Schools are for teaching skills and all history — not selective, as it has always been. He rejected Common Core elements that left math and other skills more complicated than teaching needed to be, and heard teachers who wanted to teach and not be bound by countless tests — and a specific, nationally dictated curriculum. Teachers want to teach children, and share their gifts of enthusiasm for our country and all that it has to offer. I spoke to teachers and they told me so, and how they’ve been hampered by Common Core.

DeSantis believes in border protection, and screening those that come through our state both legally and illegally, as based on Florida and US law already on the books. He listens to law enforcement, first responders, and those in the trenches looking to protect all its citizens, young, middle-aged, and old.

Gov. DeSantis had all resources on board, both regional and national, before Hurricane Ian hit. We lived through it, as well as Michael in the Panhandle and many other storms. Hurricane paths shift within hours, and you adjust. He positioned the right resources to maximize assistance.

Gov. DeSantis is not perfect. He alluded to improvements for increased educational pay and added drug enforcement and counseling. He saw the need for updated property insurance and structural integrity.

Former Gov. Charlie Crist did the usual Democratic talking points and bait-and-switch tactics that reminded me of a seasoned used-car salesman. For example:

Whenever he would not answer a question, he mentioned a “woman’s right to choose.” In fact, he mentioned it more times than I could track because it’s a “trigger issue” and everyone knows it. Talk about any serious subject, and add, “But does he defend a woman’s right to choose?” and the rest blanks out in the many minds that cannot discern what just happened. Governor DeSantis answered the questions posed by the moderator.

Crist also kept asking, when cornered, if DeSantis was committed to be governor through 2024. That was not what people were voting for. Battling inflation (cost of living -education issues), and supporting law enforcement (fighting increased drug infiltration and criminal activity on the borders) — is what’s on the front burner for Florida citizens.

I was living in this state when Charlie Crist flipped to the Democratic Party. I was disappointed because I voted for him. I came from a very liberal state — Massachusetts. I was a long-time Democrat from a family of old-school Democrats. This was the party that defended the working class. I began to see the change more clearly as I was about to leave Massachusetts in 2003. I tell folks I went into political rehab in 2000 and came out a Republican.

It wasn’t a sudden “a-ha!” It was gradual. I looked closer at my paycheck and the taxes, both state and federal, being taken out. I looked at the cost of living in a liberal state. I looked at unions and their political persuasions, and feminism spinning webs of deceit, especially among young women, including on abortion and many other issues that came of age in my generation, but had become much more radical and not serving women.

DeSantis was not afraid to speak his core beliefs, and change what needs to change. Crist could have been Biden, or any liberal of any state that is failing, who talks to get a desirable position, or wants to sell a cheap or damaged car.

That is the Democratic agenda of 2022, not the party of my parents or that I was a party of until the year 2000. They talk about fixing things, but their cities are rampant with drugs, homeless, tent cities, high taxes, and outrageous regulations, crime, and the people suffer.

Florida has been the state where both East and West Coast residents are fleeing in record numbers. I hope the state doesn’t flip to blue. I hope these new residents understand our leadership and realize why they relocated.