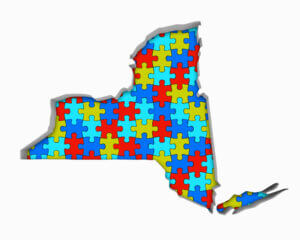 New York’s congressional politics have been thrown into chaos by a recent decision of Patrick McAllister, a Republican trial judge in an upstate New York state court. His new claim to fame is that he approved a new congressional districting map in the intensely litigated reapportionment case of Harkenrider v. Hochul. New York needed a new district map because the state lost one congressional seat in the 2020 census and experienced population shifts that resulted in malapportionment, since the previous map had been drawn in 2012.

In the game of musical chairs that followed the loss of that seat, Governor Kathy Hochul signed into law in February 2022 an avowedly partisan map that left the Democrats with majorities in twenty-two of New York’s twenty-six congressional districts. The New York State Court of Appeals (the state’s highest) frowned on the map’s blatantly partisan nature, and kicked the matter back down to McAllister. The judge promptly enlisted Jonathan Cervas, a postdoctoral fellow at Carnegie Mellon University with expertise in map drawing, to prepare the new map. Cervas took testimony from all interest groups. He responded to criticisms, for example, that questioned the wisdom of breaking up a large black community in Brooklyn into two separate districts—a move that had been savagely attacked by Representative Hakeem Jeffries of Brooklyn as “enough to make Jim Crow blush.”

McAllister approved Cervas’s map and immediately postponed the congressional primaries from June 28, 2022, to August 23, a move promptly upheld in federal district court. The final approval of the map set off rapid political maneuvers, as the new district lines departed sufficiently from the old ones to turn former allies into instant combatants. The highest-profile of these new contests pits Congressman Jerry Nadler, who has long represented Manhattan’s West Side, against Congresswoman Carolyn Maloney, who has long controlled the East Side. In a separate struggle fraught with racial overtones, Congressman Sean Patrick Maloney did not have to leave his Cold Spring home in the old 18th District to run again the black progressive Mondaire Jones in the new 17th District. But Jones instead chose to seek re-election in the new 10th District—which runs from Greenwich Village in Manhattan to the strong Orthodox Jewish community of Borough Park in Brooklyn. So now it appears that Sean Maloney will have to run against progressive state senator Alessandra Biaggi, who plans to move to the new 17th District in opposition to Maloney, whom she brands “a corporate, selfish Democrat.”

These intramural clashes will tax and divide Democratic loyalties and will, inevitably, work to help the Republicans. Under the new map, it is estimated that there will be eight battleground districts come the general election next November. This unsettled state of affairs could easily help secure a transfer of control of the House of Representatives to the Republicans.

None of these developments should come as a surprise. It is well known that the questions of districting and redistricting have long posed a major challenge to democratic theory, which in some sense wishes the composition of legislative bodies to reflect the relative strengths the various parties enjoy in the political arena.

For most of American history, the question of districting was decided wholly without reference to the federal Constitution. A famous decision, Colegrove v. Green (1946), was brought by a Northwestern political science professor who attacked the Illinois map because it “lacked compactness of territory and approximate equality of population.” Justice Felix Frankfurter rejected that claim, insisting that courts stay out of the “political thicket” of malapportionment, leaving it to either the states or Congress to redress any imbalances wrought by political forces on both sides of the aisle, who have never been indifferent to their re-election prospects.

To say the least, these imbalances have not been self-correcting, and some sixteen years later, in Baker v. Carr (1962), Justice William Brennan broke ranks with his teacher, Justice Frankfurter, when faced with a Tennessee legislature that had allowed huge population imbalances to grow by refusing to redraw state General Assembly district lines established in 1901. In Baker, Brennan found that this willful refusal violated the principle of “one person, one vote,” which he extracted from the Equal Protection Clause of the United States Constitution.

That decision sufficiently addressed the major inequities that arose from the conscious creation of population imbalances through clever districting. But at the same time, it did not address the second of Professor Kenneth Colegrove’s concerns: the compactness of the districts. It thus fell to other cases to deal with a problem that cannot be solved with anything close to the same mathematical precision unless the matter is taken from the hands of the state legislatures and turned over to a computer programmer. The situation was further complicated by the gaps left by policing only individual voting power: the “one person, one vote” formula did not address the question of whether it was constitutionally permissible, or perhaps even required, to secure majority-minority districts by skewing the makeup to forge these weird districts.

That technique of gerrymandering districts was first struck down two years before Baker in Gomillion v. Lightfoot (1960), when Justice Frankfurter upended a 1957 Alabama statute that “alters the shape of Tuskegee from a square to an uncouth twenty-eight-sided figure,” done with the explicit intent to exclude black citizens from voting in city elections. But a similarly uncouth district nearly survived in Shaw v. Reno (1993), where the legislature sought to create a majority-minority district. By a narrow 5–4 majority, the conservative wing of the court struck down a bizarrely shaped North Carolina district that for much of its length was no wider than Interstate 85, while leaving it quite uncertain how these majority-minority districts were to be drawn in the future.

In 2019, in Rucho v. Common Cause, Chief Justice John Roberts took a page from Justice Frankfurter’s playbook in Colegrove to reaffirm the principle that it was beyond the power of the courts to offer remedy against partisan gerrymandering claims because of the inability to identify “judicially discoverable and manageable standards,” including efforts to “pack” and “crack” districts. In “packed” districts the map-drawers win by handing their opponents a basketful of “wasted votes” confined to one district, while in “cracked” districts, proponents win by close but manageable margins.

Given all that long-term uncertainty, New York’s reformist elements were able to introduce by state constitutional amendment an independent redistricting commission (IRC) that contained explicit prohibitions against partisan and racial gerrymandering. Since the two parties quickly hit an impasse in their efforts to prepare a compromise map, the Democratic majority subsequently drew the heavily partisan map that Governor Hochul signed into law in February. Given the clear presence of multiple legislative violations, it was understandable that Judge McAllister went to a third party to draw a map free of partisan and racial gerrymandering. Yet at the same time, operating on an ad hoc basis, Cervas avoided cracking a largely black Brooklyn community—a sensible administrative adaptation to strong political forces.

At this point, it looks as if Cervas’s map will stand, if only because time is running out to do anything else that would not cause drastic disruptions in the November elections. But the larger constitutional questions still lurk in the background. In 2014, New York legislators drafted a statute that would give the legislature the whip hand in districting, reflecting the common stance that it is primarily the responsibility of the states to set the district lines in question.

But shortly thereafter, in Arizona State Legislature v. Arizona Independent District Commission (2015), the Supreme Court blurred the distinction between the elected legislature and independent commissions, holding that an Arizona state constitutional amendment permissibly removed from the state legislature its power to determine reapportionment questions. The source of that state power is said to rest in the federal Constitution’s so-called “Elections Clause,” Art. I, § 4, cl. 2: “The Times, Places and Manner of holding Elections for Senators and Representatives, shall be prescribed in each State by the Legislature thereof; but the Congress may at any time by Law make or alter such Regulations, except as to the places of choosing Senators.” The common assumption was that this clause would cover the case. Yet Congress had done nothing to “make or alter” state regulations. Nonetheless, by a 5–4 vote, Justice Ruth Ginsburg held that in Arizona the independent commission could count as a legislature, in part because nothing in the Constitution at the time of the founding addressed the issue.

But why? The “manner” of an election is how it is run. It doesn’t cover redistricting any more than it covers eligibility. Those subjects are left exclusively to the states as part of their residual police power, subject only to equal-protection objections. Cervas did a far better job than the New York legislature, and he was ironically more responsive to popular sentiment than the Democratic grandees in the state legislature.

Why make the use of these independent commissions only a last resort, needed to forestall political meltdown, when the system might well work better if they were allowed, as I think they are, to control the whole process from start to finish? Make the needed bold move, ratify the Cervas map, and New York could be the last illustration of a long line of redistricting failures.