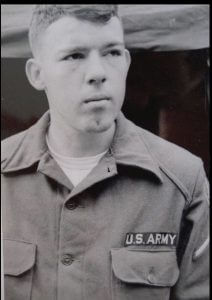 After basic training at Fort Ord, the Army sent me to Fort Gordon just outside of Augusta, Georgia, to learn how to climb telephone poles. That’s the Army for you.  I already knew how to climb poles. I was climbing poles for Ma Bell when I was drafted.

I eventually ended up in a Signal Corps outfit in Germany. That’s where I met up with Sergeant Combs. He was a big guy with a Southern accent and a potbelly, a face as black as a lump of coal, and a scowl that had permanently frozen onto his face. When Combs was mad at me, which was pretty much all the time, he would call me a “little mother [forkin’] punk.” (Or something like that.) Combs seemed to have it in for me. Perhaps he sensed the civilian wiseacre in me, and he thought it was his job to drive it out.

Combs was a forkin’ lifer, and that was the ultimate put-down in the crowd I hung around with, which included a kid from Little Italy in Brooklyn who wanted to be a novelist and an intellectual San Francisco Jew by the name of Benjamin Dubinsky.

Below, that’s Dubinsky (on the right) and me trying hard to look like civilians. We were on leave in, I think, Florence or Rome. 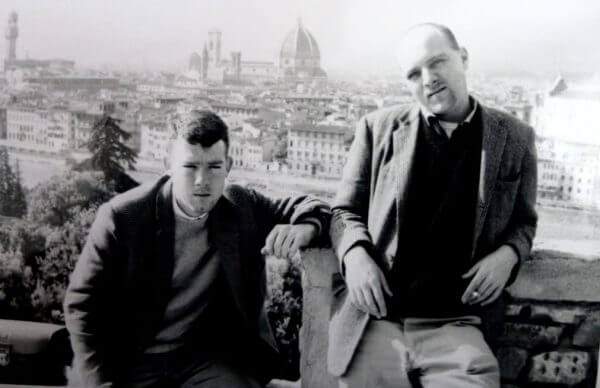 Fortunately, although Sgt. Combs had taken a dislike to me, I remained out of his reach for the most part. That was because I ended up as the main clerk in Headquarters Company, the equivalent of a white-collar worker who commuted (that is, walked over from the barracks) to my office. Because communications from 6th Army bigwigs sometimes landed on my desk, I had Top Secret and Nato Top Secret clearances. Combs was the equivalent of a blue-collar worker, out there running the troops around in the hot sun. I was in a semi-protected place where he couldn’t get at me, and I think that frosted Combs’ cookies. (If you’re beginning to think that I was a terrible snob, you’re right on, but I wasn’t self-aware enough to know it.)

I let down my guard at least once. One day, Dubinsky and I were sitting on a stoop in front of Headquarters Company. Deep in a discussion, we didn’t see an officer who walked by. Combs came rushing out of the building — he must have been watching from the window — and read Dubinsky and me the riot act, a long tirade with telling examples and a few choice obscenities, for failing to stand up and salute an officer. I could tell that it was a sweet victory for Combs.

Our battalion was on bivouac one week when I ended up — just my luck — in a makeshift shower with Sgt. Combs. Just the two of us. Talk about awkward. I was showering with my nemesis, a naked Sgt. Combs. I turned to leave when I got a glimpse of Combs’ back. Damn! His back was a mass of scar tissue and craters. The guy looked like something out of a horror movie.

The next week, back at the base, I was driving Major Yang in my Jeep. I had gotten to know Yang pretty well, so I asked him about Sgt. Combs’ back. He told me that Combs’ pitted back was the result of a Second World War II mortar that had landed near him and scattered shrapnel all over the place. In fact, Combs not only had a purple heart, he also had earned other medals for valor. Yang also told me that Combs was from a poor Southern family and that he had enlisted as soon as World War II broke out. He re-upped after the war, Yang surmised, because the Army was probably the best place he had ever lived. Combs had found a home in the Army.

I suddenly had a terrible epiphany: Combs was a man’s man. And I was just who he said I was: a little mother [forkin’] punk who knew very little about the world and its ways. I felt lower than a snake’s belly.

Combs’ tirades were now a lot easier to take after that day in the shower. Understanding had softened the verbal blows that Combs rained down on my head.

Postscript: This may surprise you, but I’m awfully glad I was once a soldier, and I look back on my service with pride.

I wasn’t a good soldier.  I was too immature for that.  But I did my time and I did my job, and the Army changed me for the better. In case you’re wondering, I did get an honorable discharge.  In fact, you might say I have two honorable discharges. Six or so months after having served my required two years, I was called out of college back into the Army because of the Berlin Crisis. So I spent nine more months in the Army, this time in Fort Lewis, Washington. There was no Sgt. Combs in Fort Lewis, so I could have done my time standing on my head.