The resolve of the Woke community to propagandize and control our children has continued to steamroller ahead, especially in the 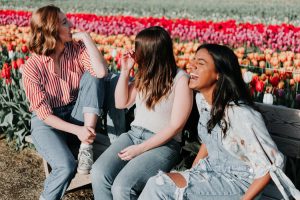 area of transgenderism. The Left is targeting them on multiple levels and in numerous venues, and we seem to be helpless to stop them. A recent article reminded me that since the Left is so determined to “follow the science,” science is one area to focus on to make sure that our children’s wellbeing is not permanently destroyed. I’ve also identified other steps we can take to at least slow down the transgender movement; at this moment, it seems like an out-of-control speeding train. But if we want to have a generation that can carry on a future that is moral and productive and to protect this country we cherish, we must act. Now.

The first medical fact that parents must know and medical professionals must acknowledge is that there has been an explosion of transgenderism among adolescent girls. Up until recently, however, gender dysphoria, the confusion over gender identity, has primarily manifested with young boys; eventually, most children revert to their natal identity:

As explained in the medical volume Treating Transgender Children and Adolescents, ‘follow-up studies have demonstrated that only a small proportion of gender dysphoric children become trans … at a later age,’ and ‘The gender dysphoria of the majority of children with gender dysphoria or gender variance does not persist into adolescence.’

For reasons still not fully understood, 75 to 90 percent of children struggling with gender dysphoria at young ages revert to identifying with their natural sex and gender by puberty. This is also supported in a careful 2020 re-evaluation of the Dutch approach published in the journal European Child and Adolescent Psychiatry explaining, ‘In a majority of the cases, the adolescents themselves ended the (transitioning) process due to a discontinued wish for medical treatment.’

It is difficult enough to imagine that parents are being brainwashed into believing that their children are transgender in their adolescence, but that the medical community would contribute to this lie is unconscionable.

The inroads that the transgender crowd have made with teenage girls are legion. A primary reason for this “progress” is that teenage girls, more than ever, feel isolated. They feel awkward, alienated, misunderstood, and confused, and social media provides an outlet and resources to reassure them that they are not only transgender, but they have found a community to support them. In her book Irreversible Damage: The Transgender Craze Seducing our Daughters, Abigail Shrier describes the devastating impact that social media has had in converting teenage girls to its transgender agenda. Instead of seeking help for depression and confusion, these girls are embraced by forces they may never have experienced previously. And many accept these gestures with gratitude and relief.

Parents have tried all manner of strategies to help their daughters through this barrage of propaganda; some parents are on the Left side of the political spectrum and don’t realize the dangers ahead for their daughters; other parents are on the political right and are concerned, eventually alarmed, by the efforts of their daughters to “fit in” with friends, but often don’t imagine how far their conversion will go. By the time they realize what has happened, it appears to be too late to turn back. And then there are those parents who are delighted that their children have chosen this bizarre and disturbed lifestyle.

Teachers and administrators, school nurses, and counselors are at the front of the line for holding the hands of these lonely children. And they are quite happy to provide sources, solace, and opportunities for conversion. They work hand-in-hand with willing parents, creating an unbreakable team effort for brainwashing and corrupting these adolescents.

At first glance, the situation sounds beyond redemption, doesn’t it? But have you thought about the future of these young women if we give up on them? Many of them do not have loving relationships once they’ve abandoned their families. Many may decide not to have children; others will have mastectomies. Although they may present to the world a happy exterior, they will clearly be troubled and continue to feel isolated. As Shrier said in her book:

Only 12% of natal females who identify as transgender have undergone or even desire phalloplasty. They have no plans to obtain the male appendage that most people would consider a defining feature of manhood, As Sasha Ayad put it to me, ‘A common response that I get from female clients is something along these lines: ‘I don’t know exactly that I want to be a guy. I just know I don’t want to be a girl.’

What can we do? All of the following steps will be difficult to implement. And there’s little point in going after the activists because they will shout us down. But I think the strategy can target school administrators and boards, finding ethical medical professionals who will pay attention to the data and parents themselves.

With the schools: If you’ve been following the pushback on Critical Race Theory, you’ll see some of the strategies that will work. Fight the school boards at their meetings; attack them on social media; promote the actual medical facts in every venue. Keep the pressure steady and determined.

With medical professionals: Promote the truth with actual data through medical journals. Hold conferences to communicate the truth. Establish professional medical groups that are focused on helping children. Enact rules and laws that prohibit the use of puberty blockers or deforming surgeries before a certain age without parental permission.

With Parents and Families: Be aggressive about telling parents where they can get the information they need; side-step everyone who tries to stop you. Form support groups and networks. Provide teen groups that offer healthy and functional young women who want to live happy and productive lives. Find ways early on to limit a child’s access to social media; negotiate their staying off damaging sites that will try to convince them that transgenderism is healthy and attractive. Offer a balance of compassion and clear rules that show that all of us, to live meaningful lives, must find the balance between getting everything we want in life and finding happiness. Stress the value of being a good person, of having relationships, of being a contributor to the world.

Although some people might be tempted to write off these children as impossible to rescue, I hope others might take up the cause. In many cases, these were bright and social children who, once they entered puberty, became sidetracked. These kids are our future. They deserve a chance to emerge from this nightmare.

They have deserved the right to simply be themselves.

[My thanks to Rodin for recommending Abigail Shrier’s book.]