Generally, I only inflict my culinary exploits on the PiT. (Before you start to feel too bad for them, you can rest assured that they are not passive victims in this endeavour). As with so much else in my life, my gastronomic tastes tend to veer a little bit outside of the mainstream, especially for a college student that lives alone. Mostly traditional Chinese, Taiwanese, and Japanese food, as well as some Middle Eastern, and not quite any burgers, spaghetti, and donuts. My parents don’t exactly love it when I come home, and the next day they have a fridge fully stocked with tofu, preserved bamboo shoots, century eggs, kimchi, and the like. (Mom draws the line at congealed blood and chicken feet). With England in lockdown yet again, I’ve had more time than normal to cook for myself, and, like an old and familiar friend, I often gravitate towards Szechuanese and Xi’an food.

Chinese food encompasses a vast array of regional dishes, ingredients, and methods, but there are, in modern times, the 八大菜系: Eight Great Cuisines of China. Szechuan cuisine is one and is renowned in the country and around the world for its characteristic pungency and spiciness. Commonly available ingredients, like garlic, ginger, sesame paste, and green onion, play a role in this, but so do two ingredients grown almost exclusively in the region. The Szechuan peppercorn, which creates a unique kind of numbing and tongue-tingling spice when consumed, and the heaven facing pepper, oftentimes too hot to be consumed raw but a staple in dried and cooked form. If you’ve ever had Szechuan food, you’ll be familiar with that pepper, and also with the chili oil that is almost ubiquitous in it.

Szechuan food has these characteristics for more reasons than the geography and native flora and fauna. One of the concerns of traditional Chinese medicine is ‘internal dampness’ caused by humidity, which can lead to digestive issues, lethargy, and rheumatism. Given the province’s dreary, rain, and cloud-filled climate, it’s natural that its people would be concerned with such issues affecting them. A solution for these issues is spicy, hot food, and since the region is so good at growing peppers and peppercorns, they became more than just a convenient ingredient in the local cuisine. They are a tonic against all of the natural ills which might inflict inhabitants.

Monday is generally my shopping day, and since I was low on chili reserves, and my favored Chinese market has a huge chili and spice section with an abundance of high-quality products at relatively cheap prices, I may have gone overboard. Thus, a not entirely unique fusion dish was born.

Chinese cuisine, such as you can really call it that, has many different flavor profiles based on ingredients and region. Szechuan’s most famous is 麻辣 (mala), a combination of chili peppers and the aforementioned peppercorn, with its famous numbing property. 麵 (biang biang mian) are a favorite staple of Xi’an cuisine; wide, hand-stretched and beaten noodles which are seasoned by topping the cooked mian with a spice/herb mix (chili flakes, garlic, etc), coating the bottom of the bowl in soy sauce and black vinegar, and pouring smoking hot oil over top. It creates a rich, slightly smoky, tingly, spicy, and tangy sauce. Szechuan peppercorn is often added to spice mixture because of Shaanxi’s (Xi’an’s province) proximity to Szechuan. (Biang is an infamous character in Chinese, the most complex in the language at 57 strokes; it’s actually an onomatopoeia, representing the sound the mian dough makes when being smacked against a table or chopping board).

Meanwhile, Szechuanese cuisine has a dish called 豆花饭 (douhuafan), a kind of soft tofu topped with a chili oil/paste combination, and all served over rice. The final preparation of this includes not just chili powder, flakes, and paste, but cardamon, MSG, star anise, dried sand ginger, garlic, scallions, and white pepper.

I’ve made biang biang mian a few times before, but I wasn’t quite up to sourcing all of the things needed for douhuafan, so I decided to split the difference, with a few twists. Instead of soft tofu, I lightly coated firm tofu in corn starch, pan-fried it, and placed that over rice. Instead of sticking to the standard combo of chili powder, chili flakes, green onion, garlic, and salt with the biang biang spice, I incorporated a pinch of MSG into that base mix, and placed a piece of smashed ginger, two star anise seeds, and 1/2 teaspoon Szechuan peppercorns into the hot oil, and poured it through a fine-mesh sieve onto the spice mix. From there, I added equal measure of Canto black vinegar and Kikkoman Japanese market soy sauce into the oil to create a dip that could also be used to smother the crisp tofu.

You can see the whole process here, and I will leave a recipe in the comments for anyone that may wish to try it: 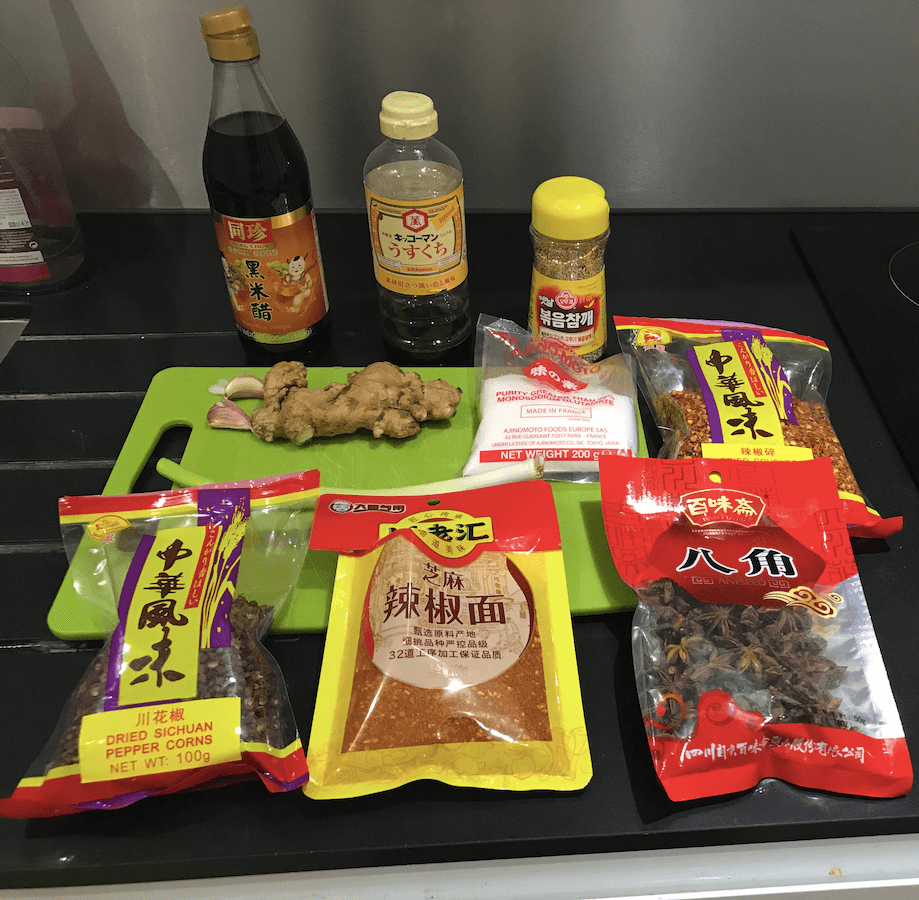 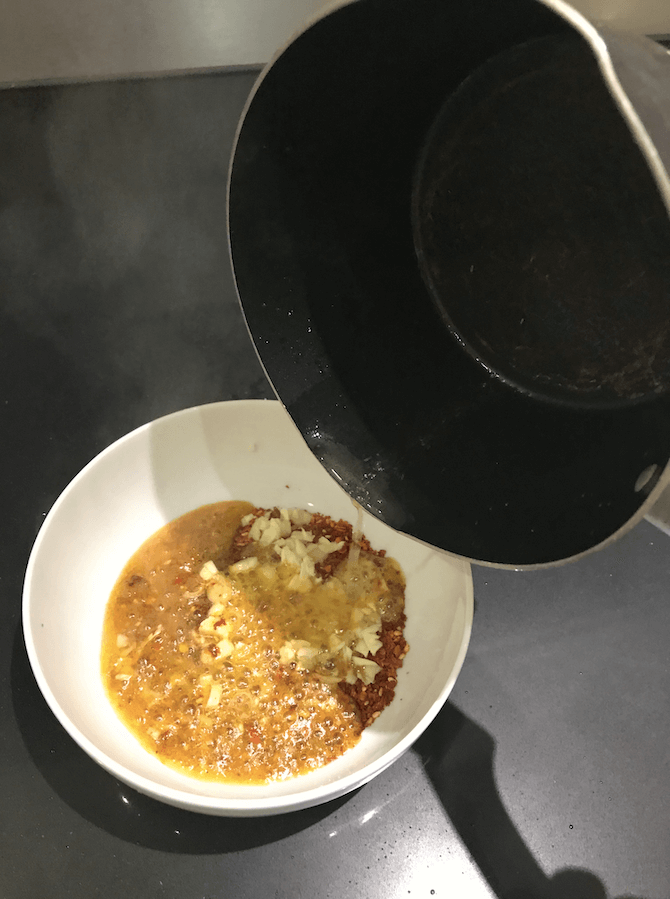 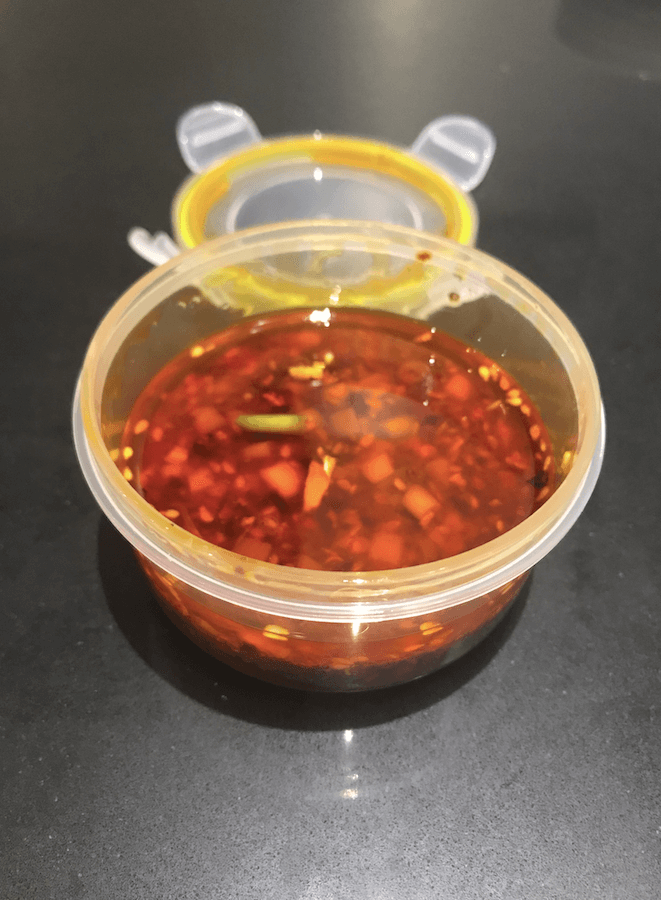 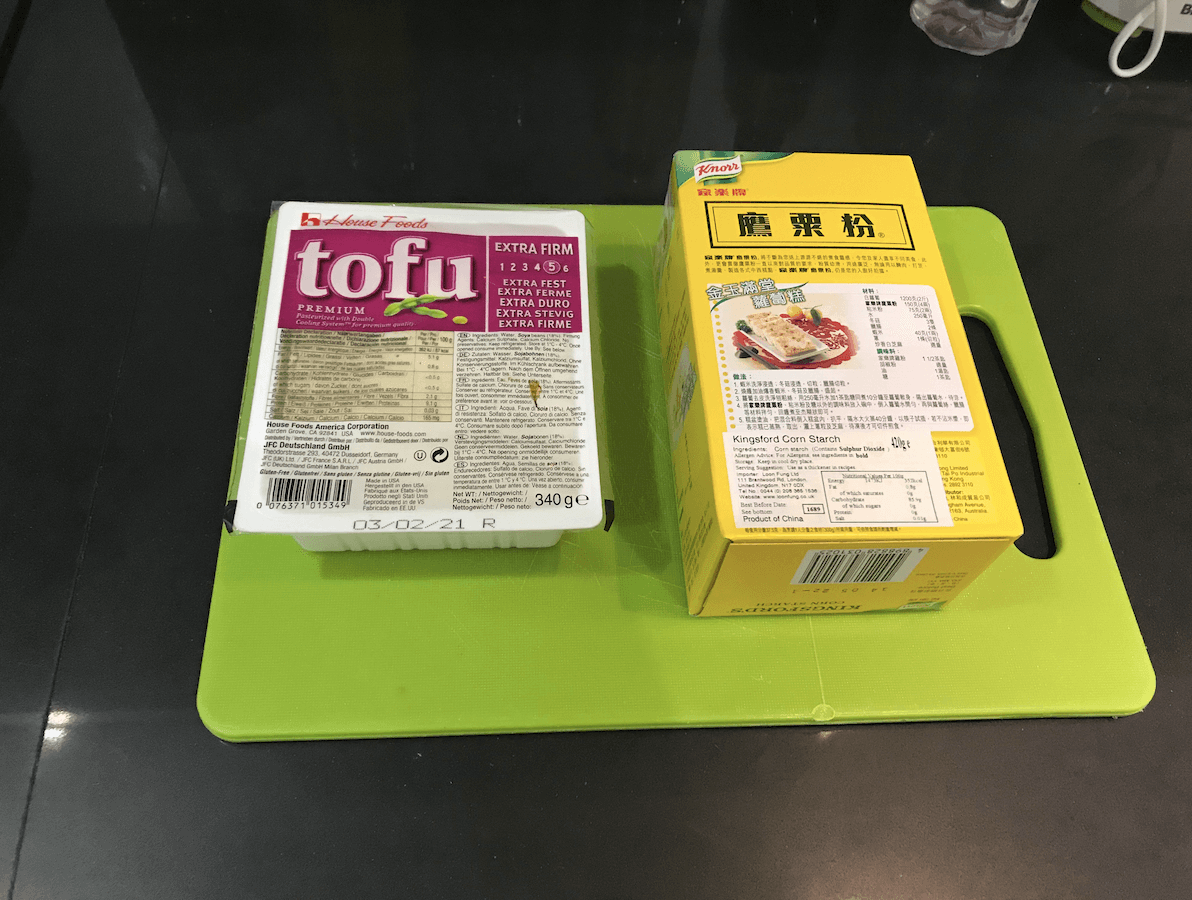 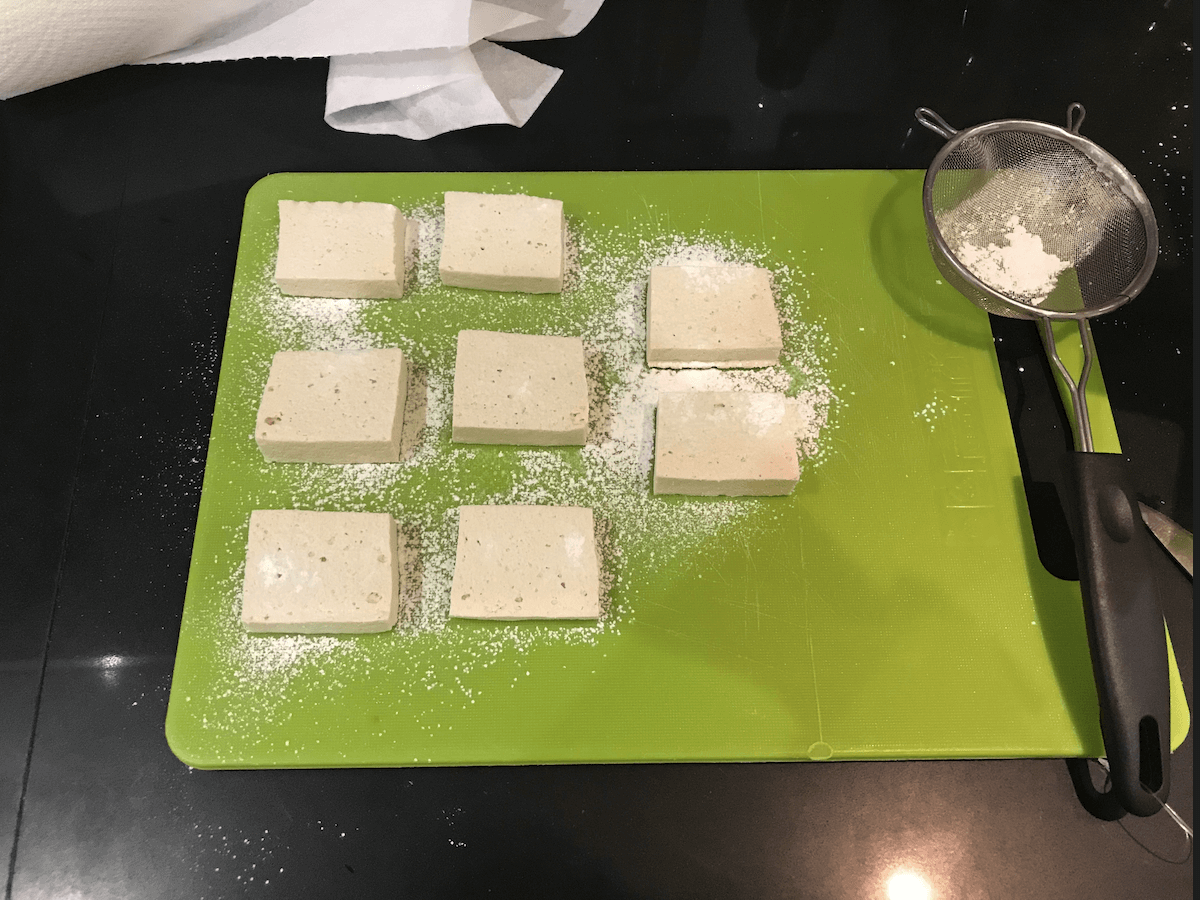 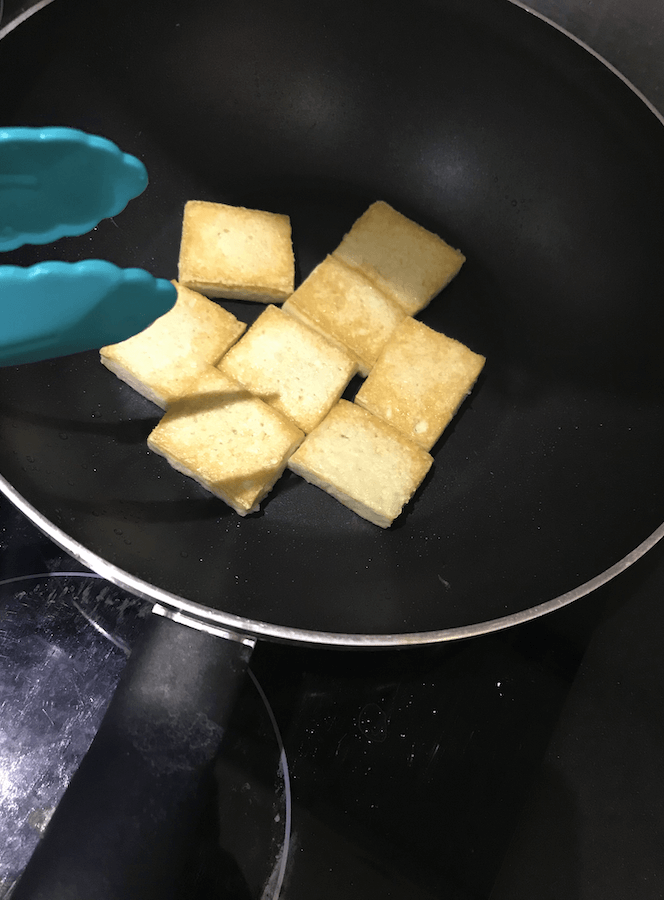 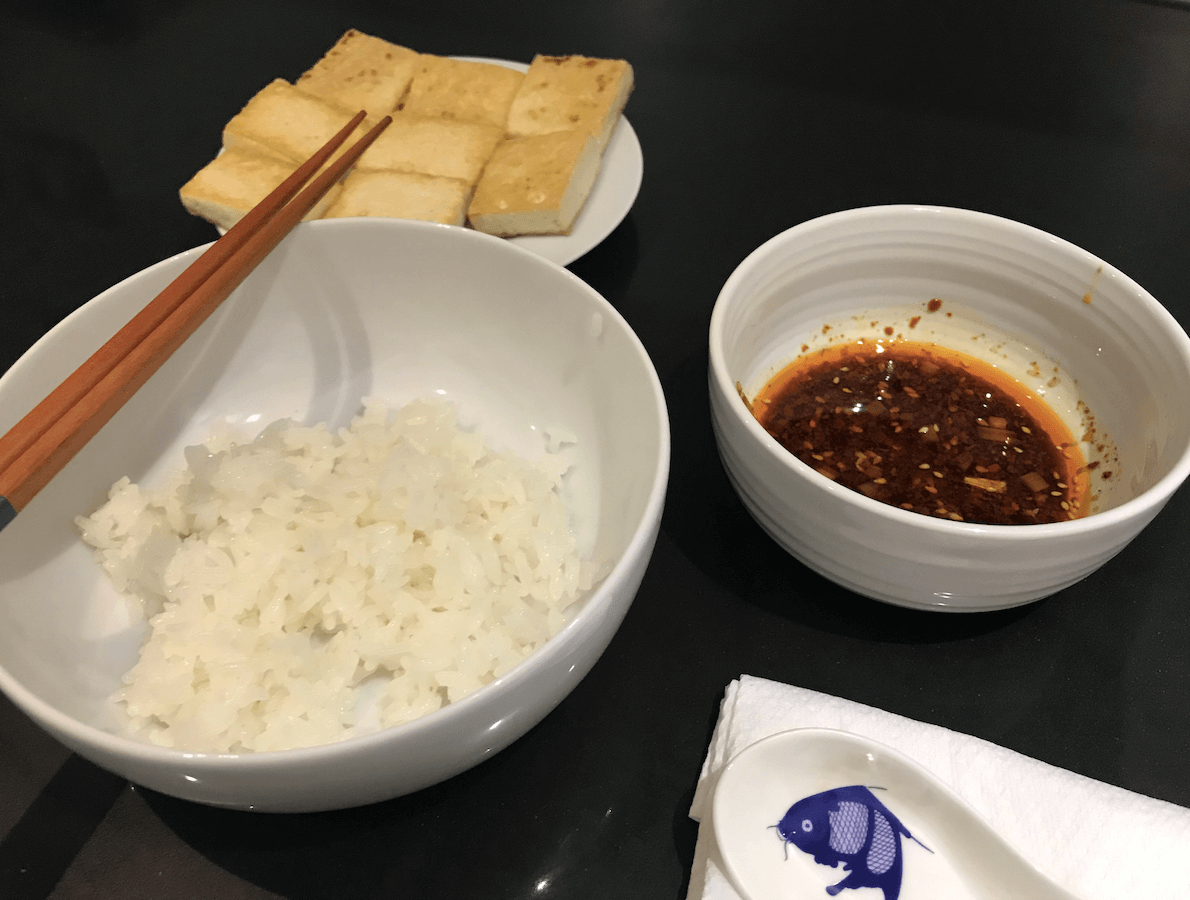 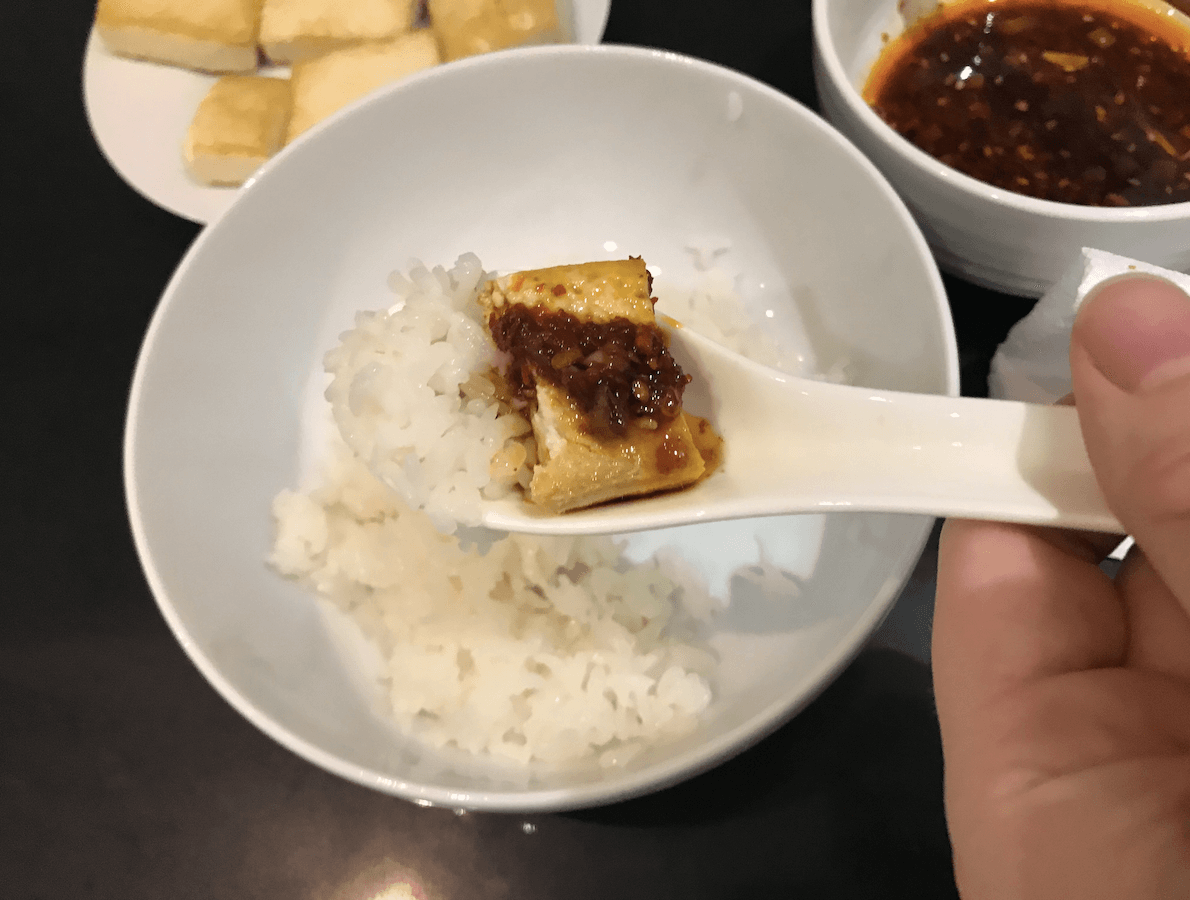