“Why are Washington and Oregon the home turf of every violent left-wing radical? It seems to be a never-ending cycle of radical lefties burning down Starbucks and moderate lefties upset they can’t get their lattes.” — Milo Yiannopoulos 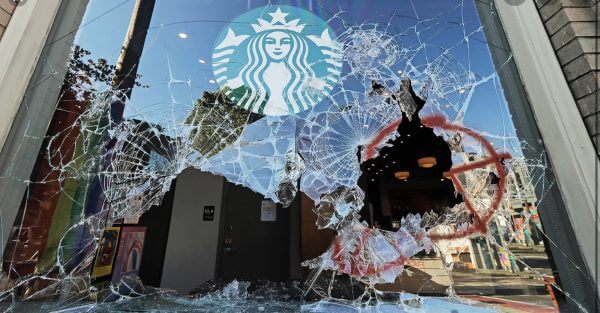 Portland was once a great little city: clean and neat, full of parks, food trucks that served everything from full Egyptian meals to Salvadoran street food, one of the great Japanese gardens of the world, and of course Powell’s, the U.S.’s largest independent bookstore. The New York Times — enamored of Portland’s urban hipsters, quirky left-wing politics, and, for reasons beyond my understanding, Voodoo Donuts — would run an article on Portland, it seemed every few weeks. To the East Coast sophisticates at The Times, Portland was not only politically correct, but it was also Northwestern cute.

We’ve retained our political correctness but we’ve lost our cuteness. Storefronts are boarded up, bums camp out on the streets, graffiti is everywhere, and trash is strewn on our once clean sidewalks.

The Left has trashed the town. Oregon has a left-wing governor with an authoritarian streak, who has been all too eager, with Covid-19 to back her up, to close up small businesses and restaurants, including outdoor eating areas; which has resulted in deserted storefronts and thousands out of work. Closer to home, Portland has a spineless left-wing mayor, who did nothing when mobs burned and trashed the city night after night. And of course, Portland has mobs of left-wing jackals, mostly young white males, who form a volatile underclass in Portland and who pretend to be working on behalf of social justice as they trash the city.

At one point, looting and rioting went on for a hundred straight nights. That’s right, over three months straight of nighttime destruction by roving groups of young radicals, who have thrown burning flares through the windows of the Oregon Historical Society and smashed church windows. Nothing is sacred. 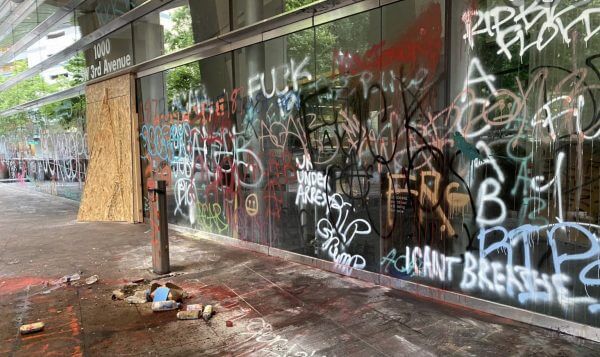 I moved out of the city center before all of this happened. I now live in the Portland suburb of Tigard, and even though I read The Oregonian every morning, stories on the broken and trashed condition of Portland have been so rare that I had no idea that Portland looked the way it does.

My wife Marie, who had recently driven into the city on business, told me the city was a mess. I didn’t believe her. It would have covered thoroughly in The Oregonian, wouldn’t it? So she and I took a drive into the city a few days ago.

We started out walking north along the Willamette River, where we were almost the only walkers on this once popular walk. I looked over to Naito Parkway, which runs parallel to the river, and could see nothing but boarded-up storefronts.

We turned left at the Saturday Market Square and walked up to Fourth Street. The bathroom along the way was boarded up. The walk south on Fourth Street was depressing. Something like seventy-five percent of the storefronts were boarded up. There was trash on the sidewalks, graffiti on the plywood. A couple of the food trucks were open but they had no customers. The entrance to Portland’s upscale downtown mall was boarded up, as you see below. 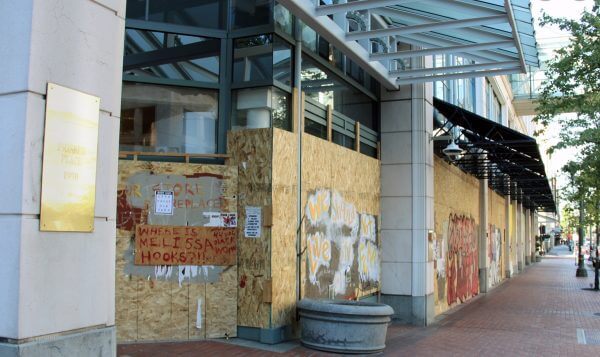 There were encampments of tents, along with their trash, on sidewalks, in alcoves, under bridges, on the slopes that lead to the freeway — anywhere and everywhere. Two statues on the South Park Blocks, Teddy Roosevelt and Abraham Lincoln have been pulled down off their pedestals and slogans painted on them.

In Chapman Square, there used to be a marvelous statue of a pioneer family. The father, his rifle propped up against a wagon wheel, is pointing out something to his wife and son, perhaps the glorious future that awaits them. Here is that statue: 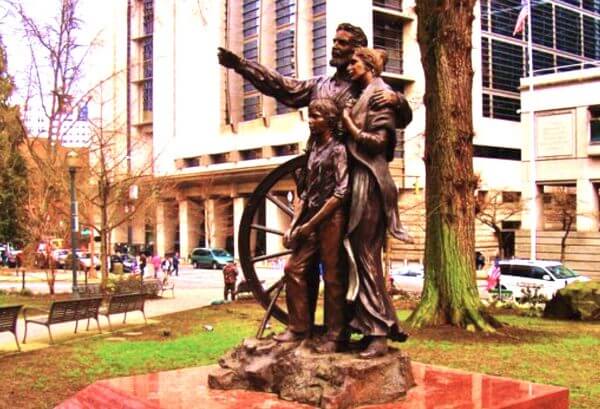 The woke vandals may have been incensed by the patriarchal nature of the statue, the man’s rifle, or perhaps the Bible in the child’s hand. At any rate, they destroyed part of the pedestal and scrawled some graffiti on the statue. We now have a busted and defaced pedestal to look at. (The vandals sometimes bring sledgehammers with them.)

Below is a couple of Portland’s dimwitted radicals trying to burn the statue pictured above. The statue is bronze, so that didn’t work. The next day the city took down the statue, charred but intact, for safekeeping. The age of the dimwits will pass sooner or later and then the pioneer family can go back up where it belongs. 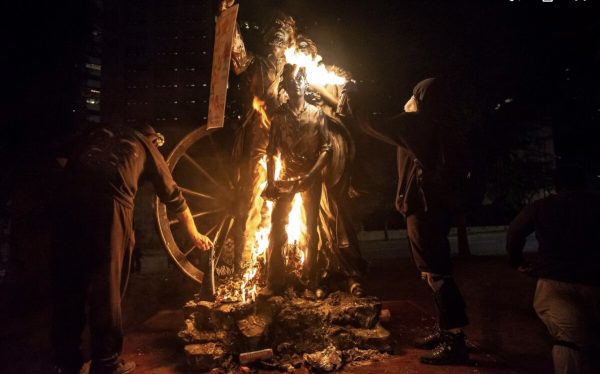 The biggest story in the history of Portland, the decline of a once livable city into a scary mess, and The Oregonian doesn’t deem it worth their while to go about the city and report and photograph on what has happened. My suspicion is that the story has been largely underreported because it’s the Left that is responsible for the destruction and The Oregonian is accustomed to blaming everything on Trump and his followers. Making too big a deal of the destruction would be like ratting on your lefty buddies.

Here’s more of the new look for Portland. This is the boarded-up Apple store, one block from Courthouse Square.

The left-wing protest/vandalism/looting movement that started with George Floyd has been propped up by lies and hypocrisy. The Portland mayor and city council pretend that rioting is protest. The vandals, who have wrapped themselves in the felicitous language of social justice cliches, pretend that they are improving society as they trash it. And finally, The Oregonian pretends that it is a reputable newspaper.

When Marie and I got back to Tigard after our eye-opening walk around Portland, I saw the scattered Black Lives Matter signs in my white, upper-middle-class neighborhood in a new light. These signs only make sense if a second sign is added: Imbeciles Live Here.