I know y’all have been waiting eagerly with your wafer in the chamber, the temperature pumped down and your native oxide layer stripped off for me to finish this two-parter. Well, wait no longer! Okay, maybe wait some as you have to find a tank of dichlorosilane to hook up so you have something to epitax onto your wafer. Di-what now?

Dichlorosilane! Or Tri- or Tetra; really anything from SiH4 to SiCl4 works, though I’m told industry generally works with SiCl2H2. Alright, you pump in dichlorosilane gas and react it on the wafer and it puts silicon on top of your silicon. Neat, huh? That’s it! Join us fortnight next for —

Hah, just kidding. You know I’m not going to let you out of here before I’ve thoroughly bent your ear. But good news! The details in this process are fascinating. Alright, let’s start right off. You need to pump your silane gas into the chamber, you need some amount of your dopant gases (either B2H6, PhH3, or ArH3 depending), you need to get the gas atoms to adhere to the surface of your crystal, you need to get them to react, to leave the atom you want, and the rest of your chemical reactants to go henceforth, harming none and taking no revenge on the crystal already there. Still sound easy? Don’t worry, it gets more fun.

If you’re depositing SiCl2H2 then your ultimate chemical reaction has got to look something like this:

Catch that? Your giving of gaseous hydrochloric acid as a byproduct. It’s worse than that; to get it to run you need to have your wafer hot (between 600 and 1500C, depending largely on which chlorosilane you’re using). You want the reaction to happen on the wafer surface, but some amount of reacting is going to happen in the air, like this for example:

The hydrogen is just fine, it’s the other stuff that’ worrisome; by the nature of the process you’re going to have radicals floating about like it’s the Antifa zeppelin parade. Actually, “it is theorized” to use the dry passive voice from my textbook* that the SiCl2 is the stuff that does the actual reacting. Me, I look at that and think “There’s no way that that’s going to bounce harmlessly off the sides and such in the chamber. I bet it’s a royal pain to scrape these things clean every so often.”

Never mind the troubles of the poor maintenance guy, are we good now? No! You’ve got to get your SiCl2 down onto the surface of the wafer. That means it has to diffuse through a stagnant layer of gas. Actually, you want to know how that works, I suggest you go back and take another look at Chemical Vapor Deposition. Let’s skip ahead, our precursor molecule is safely adsorbed onto the surface of the wafer. Let’s slow down a bit, take a look at the crystal structure of the wafer

Not pictured: Actual silicon, or silicon’s actual crystal structure. Pictured: A model that’s close enough to get the point across.

What are we looking at here? Your wafer is composed of a single silicon crystal. On the surface, you will find terraces where a single layer of the crystal rises above the next. In these terraces, you’ll find kinks, where there’s an angle. An atom in a crystal is at a lower energy state when that atom is touching other atoms. So what you’ll see is a single atom of silicon sticking to the surface of the wafer (everything is a little bit sticky when you get down to that level), it’ll skitter back and forth until it runs into a wall, then it’ll tend to slide along the wall until it finds a kink. At that point, it’ll stick in place, and your crystal has grown by one atom. These walls and kinks are so useful that wafers are typically cut at a three-degree angle to the crystal structure in order to facilitate this process.

Okay, but I skipped a step; it isn’t just silicon that’s landed on the surface, it’s SiCl2. What happens to the chlorine? Ideally, it reacts with atmospheric hydrogen to form HCl and floats off to the gas outflow. What if it sticks to the surface too? You can get two free HCl molecules bumping into each other, which can etch a silicon atom away from the substrate and send it flying back off into the air. Hey! I was using that! 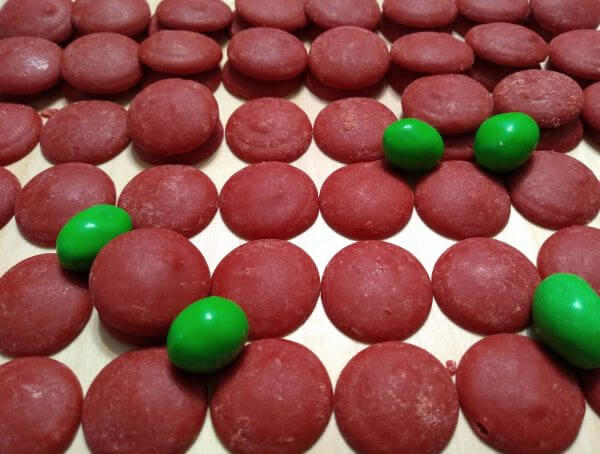 Let’s see, we’ve got a SiCl2 adatom, a Si atom stuck to the wall, and another atom or Si which nevertheless is going to get etched off by the two chlorine atoms stuck to it. Oh, and a single chlorine atom which is drifting about, waiting for a hydrogen atom to find it. Hydrogen atoms not shown because nobody shows hydrogen atoms. Silly things, really.

What happens if two or three silicon atoms bump before they hit the wall? They can form their own island. This is actually a bad thing; when the crystal growth meets the island they might not form up, which will give you defects in your crystal (which in turn may lead to non-functioning devices and hence a wasted chip.) What are we to do? You can slow down the reaction by adding a little extra hydrochloric acid to the gas mix. It’ll speed up the etching on the surface which has the same net effect of slowing down deposition. You move from the three-dimensional growth model to the two-dimensional. (That is, atoms getting stuck in kinks in the planes method described up above.)

And the dopant? How does that work out? Actually, pretty much the same as the silicon. You control the amount you’re doping by the mixture of the gas in the chamber. Oh, it’s more difficult than that, of course. Because you’re heating the wafer up so much expect the dopant from the lower layer to do some diffusing into the higher (and if you’ve got devices already built on your wafer expect a certain amount of diffusion there too. Be careful; too much and you’ll break your devices.) What’s worse, you’ll get the occasional dopant atom diffusing to the surface, reacting with free HCl, floating off for a bit, and landing elsewhere. This can also screw up devices you’ve already made on your wafer. 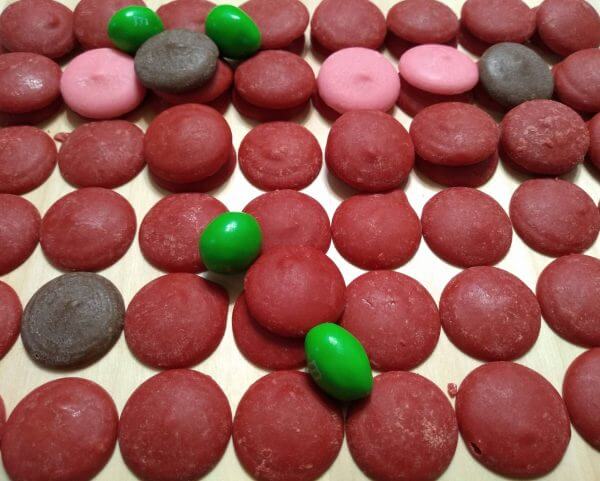 The astute among you have realized that I didn’t recreate the crystal, just swapped out a coupla atoms. The really clever think I’ve made some sort of metaphor by doing it this way. The smartest among you realized that no, I’m not that clever.

In this last photo, we see someone layering one type of doped silicon crystal atop another. It’s sort of hard to tell which is which; there’s a brown dopant in the bottom row, but three pinks and a brown in the second row. Perhaps the brown atom with the two chlorines attached to it in a new third layer means that’s what we’re pumping in, or perhaps it got picked up from the bottom row and redeposited on top. There’s an amazing amount of ‘season to taste’ in these recipes, more than my textbook was comfortable letting on.

There are more things you can do with epitaxy; in particular, Molecular Beam Epitaxy lets you dispense with the gas and just shoot atoms of your preferred variety at the wafer. (It also seems like something you’d be able to weaponize. “Stand down Superman! Your heat vision is no match for my Molecular Epitaxy Beam!) Want to deposit gallium arsenide? Send arsene gas over a heated block of pure gallium before it hits the wafer. Or use a metallorganic gallium molecule; it doesn’t make good gasses with halides like the rest of these molecules. But frankly, I’ve overstayed my welcome already on this topic. Join me next week when we cover Chemical Mechanical Planarization in “Abrading Your Troubles Away” or “You thought Kansas was Flat?”

*Still the same textbook as last week, and a copy-pasted disregard to the proper citation formatting process. Suckers! Fabrication Engineering a the Micro- and Nanoscale (third edition) by Stephen A. Campbell, published by the Oxford University Press.

This is part 39 of my ongoing series on building a computer, the way our grandpappies did it back in Atlantis. You may find previous parts under the tag How to Build a Computer. This week’s post has been brought to you by the Rosicrucians, offering hidden wisdom at the low low price of $13.35 a month, and don’t you trust those freemasons!