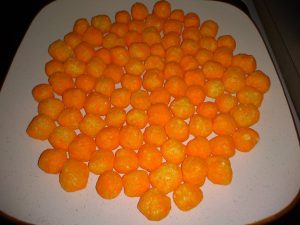 The Cheese Balls represent atoms in a silicon crystal. The platter represents my desire to not scatter them all over the floor. 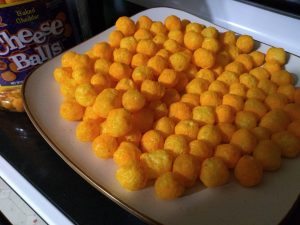 This would be a better demonstration if I had something other than more cheese balls to pile atop the first layer.

…another layer of crystal. Now, you may be thinking “If you wanted another layer, why didn’t you just cut the dang thing thicker to begin with? Do I have to think of everything?” You have a point there. The trick is that the second crystal doesn’t have to be the same as the first. That opens some possibilities.

Not just Epitaxing for the Fun of It

The first one is that you can deposit silicon that’s doped differently than the base layer. That opens up some opportunities in device design. Recall that to make a transistor you’ve got to have three distinct regions of different doping, either PNP (positive negative positive) or NPN. You might be able to make slightly smaller devices if you can hide some of those regions below others instead of next to them.

The second option is that you can actually put down a different kind of crystal on top of another. Early on they figured out they could put silicon on sapphire. Since sapphire doesn’t conduct electricity, etching the silicon down to the substrate gives you a great insulator between devices. It’s useful for making circuits that are hardened against radiation.

You can also put down gallium arsenide on top of silicon. This lets you take advantage of the faster switching times GaAs provides, as well as allow you to make devices that you can’t in ordinary silicon. By which I mean lasers. Now I don’t know that anyone has come up with a commercial application for building lasers onto your microprocessors, but don’t let the foolish limitations of feeble minds deter you from greatness!

Okay, now that you’re good and motivated to start laying down epitaxial layers, how do you go about it? Well, first we need to deal with a problem. Your wafer is rusty. Take a pure silicon wafer and expose it to air, the top layer of the silicon will oxidize, giving you some SiO2 which you don’t need. On top of that, you may have already added other contaminants. If you’ve processed your wafer some already that can leave residues.

Broadly speaking you should concern yourself with three classes of contaminants. The aforementioned silicon dioxide, metallic particles, and organic, (comprising of leftover photoresist, loose polyimide, and things which can only be tastefully described as ‘other’). To remove each of these contaminants you need a different approach. Start by stripping off the organics. Use an oxidation/reduction solution (typically one part ammonium hydroxide, one part hydrogen peroxide, and five parts water. Don’t try to gargle that).

Now we’ve got to remove the silicon dioxide layer. If you didn’t have one before, you’ve got one now that you’ve run hydrogen peroxide over it. That stuff will oxidize your surface like a California wildfire. To remove it, acid works. A dilute hydrofluoric acid will get the job done in about ten seconds. There’s a neat trick you can do to test this; water will stick to silicon dioxide but not to pure silicon. Flick a droplet of water onto your wafer and if it rolls right off you’re done etching.

To get rid of the metals we’re going to use another acid. One part hydrochloric acid, one part hydrogen peroxide, six parts water. You’re well advised to keep your hydrochloric acid away from your ammonium hydroxide. But note the peroxide in there again; you’ll have a thin layer of SiO2 formed again when you take the wafer out. Maybe that could be avoided, but then again you’d have gotten some oxidation on the walk from your cleanline over to your epitaxy machine. We’re going to have to strip the remaining oxygen off in process.

The Down and Dirty of Epitaxing

Real quick though, I wanna quote a line directly from this textbook* I’ve been using, which begins a discussion of this process:

The prebake must be carried out in a temperature-oxidizing ambient partial pressure regime that makes the native oxide thermodynamically unstable.

Got that straight? I’ll be honest, I’m not 100% on it myself. Let’s take it a bit at a time. Thermodynamically unstable; that means get the sucker hot. Partial pressure regime; that doesn’t mean lower pressure (although lower pressure helps) It means you’re going to have to control what gasses are in the atmosphere inside your epitaxy engine. Fair enough, we were already going to have to do that. “native oxide” is the SiO2 layer we were worrying about. Prebake means we’re heating it up to make the oxide unstable so that it gets cleaned off and we can epitax. Add it all up and we’re in business.

We’ve got our wafer cleaned up, we’ve ran it through the prebake, and we’re going to put something on there. That’ll have to happen next time; I’ve ran out of my knowledge. Join me fortnight next when I’ve frantically dug through my textbook to be able to finish off epitaxy in “Taxing our Patience” or “You don’t really think we’ll trust you to have another one up in two weeks, do you?”

*I suppose if I’m going to be going almost entirely off what this textbook is telling me I ought to cite it. Fabrication Engineering a the Micro- and Nanoscale (third edition) by Stephen A. Campbell, published by the Oxford University Press. And I’m taking a perverse pleasure in not formatting that correctly by any standard I learned in college. Screw you MLA, APA, and whomever else it may concern!

This is part 38 of my ongoing series on building a computer, the Rip van Winkle way. You may find previous parts under the tag How to Build a Computer. This week’s post has been brought to you by, I dunno, one of those mattress companies that advertise on podcasts all the time. You know who I’m talking about.