A few days back, I discovered a couple of promising quotes that I thought would work for my upcoming Quote of the Day post.

A dog is the only thing on earth that loves you more than he loves himself. — Josh Billings

The Monroe quote brought to my mind one of my favorite words, “toothsome.” I could work that neatly into a post on Hollywood’s blonde bombshell. After all, Marilyn was, if anything, terribly toothsome. But then I ran out of ideas. It’s hard to build an entire post out of Marilyn Monroe’s toothsomeness. Besides, the topic was likely to get me into trouble with the lassies on Ricochet.

The second quote, about how lovable dogs are, would write itself. I often sneak Bob the dog into a variety of my posts anyway, and this quote was like an invitation.

I declined that invitation. You see, I’ve begun to feel a bit self-indulgent about posting Bob stories and photos in what is essentially a political site. Besides, I know you have cute dogs, too. So the dog quote was out.

So there I was, all out of ideas with one day left before my post was due. The Arahant, the boss man of the Quote of the Day feature, was going to come down hard on me if I didn’t come up with something on my scheduled day.

Then I remembered a recent post by Mrs. @She, which consisted of a photo of a woman wearing a chicken hat, accompanied by a mere twenty-three clever words. That chicken hat post was a big hit.

I could do that! I could find a quirky subject and write a few words about it. So I took a little walk around the house to look for a quirky object or two to use for a post. Aha! There they were, my two little statues sitting on my fireplace mantle. I had carved them a few years back when I was selling things made out of wood at a local Portland craft fair. These two were left over. They’re not as quirky as a woman wearing a chicken hat, but they might be quirky enough. 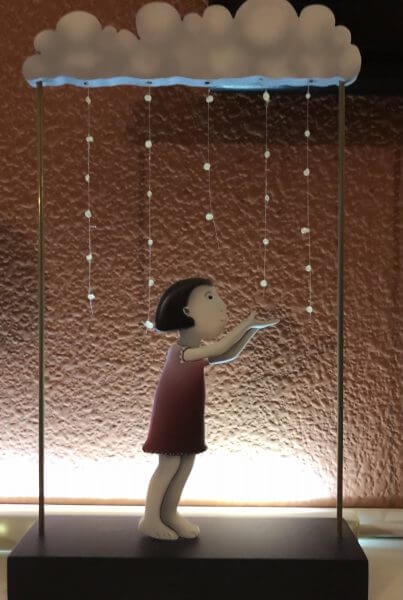 I stared at them, hoping that I would be as inspired as Mrs. She was when she first laid eyes on the lady with the chicken hat.

Aha, I was beginning to get a glimmer of an idea. Now all I needed was a quotation. No problem. Using Google, I found a promising quote by Philip Pullman from his book, Lyra’s Oxford.

That seemed sufficiently broad in scope so that I could fit, well, everything in the world into it.

So if everything means something, I can call the little girl enjoying the rain “The Trump Years.” I can see it: The cloud is Trump, and the rain represents the shower of blessings that are the result of Trump’s policies: fewer regulations, no wars, a stronger Mexican border, lower unemployment, a rousing economy, and so forth. The little girl is America. Damn, this was going well! 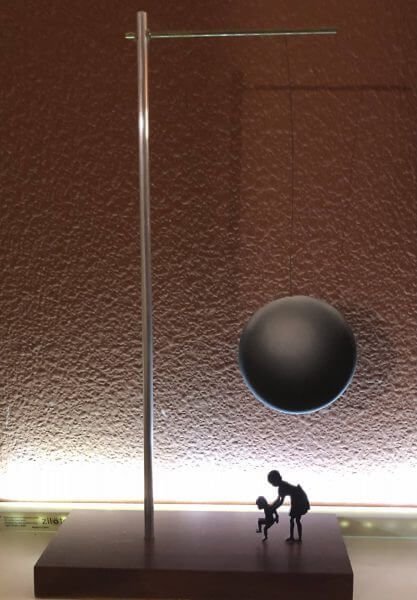 I can call the second statue “The Coming Biden Years.” The ball represents Biden’s policies. Our resistance to Biden’s policies is the fragile string holding up the ball. Unless we can keep it together, the string will snap and the falling ball will crush America with higher taxes, porous borders, higher energy prices, and socialism!

So there you have it: I’ll use my toaster oven as the subject of my next post. A toasted bagel can symbolize. . . .

Published in General
Tags: Mrs. She, QOTD, Quote of the Day, Something, The Process Is the Product, two little statues