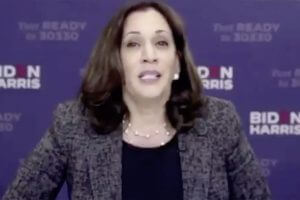 Political commentator Michael Kinsley defined a gaffe as “when a politician tells the truth – some obvious truth he isn’t supposed to say.” Democratic Vice Presidential nominee Kamala Harris made a curious one Monday, mentioning “A Harris Administration … together with Joe Biden.”

Perhaps this was just a misstatement. It could be another example of Harris’s legendary ambition and preening self-regard. But it appears she was reading from a teleprompter. Is the Veep nominee telegraphing what seems obvious to most Americans, left and right — that Joe Biden will be unable to fulfill his presidential duties for long, if at all?

As I noted yesterday, Joe better hire a food taster.

But Harris’s Monday “gaffe” made a Tuesday statement by Biden even more concerning.

Straight from a teleprompter, the Democratic presidential nominee said “Harris-Biden administration.” Perhaps this was yet another misstatement. It couldn’t demonstrate Biden’s ambition or preening self-regard since he subordinated himself to a woman who dropped out of the primaries before anyone had a chance to vote against her.

Not to wax conspiratorial but what on earth is going on here?! Are the Dems preparing voters for a flipped ticket? For Biden stepping down due to health reasons immediately after the election? Before the election?

Once is happenstance, twice is coincidence, three times is enemy action. With one more “Harris/Biden” gaffe, look out for the greatest bait-and-switch in American political history.