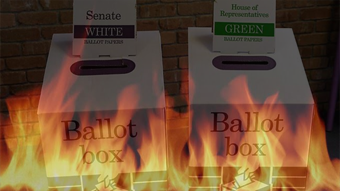 Governor Doug Ducey gave a warning order through the media and then issued an executive order imposing a 8 p.m. to 5 a.m. curfew statewide from May 31 to June 8, 2020. Other governors are doing likewise. This obviously throttles small business just as they were supposed to be getting Ducey’s boot off their neck. He did so after powerful backers were shocked by the “looting” criminal raid on the nationally known Scottsdale Fashion Square, carrying off millions of dollars in high-end merchandise. Now people cannot go out to eat or drink after work or on the weekend, so long as basic security is not reimposed nationally.

Governor Ducey started the day with the right sorts of words, especially about leaders working today:

“I want to commend our law enforcement officers on their work last night, especially the Arizona Department of Public Safety, Phoenix Police Department and all the supporting agencies involved in protecting downtown and major targets, like our freeways. The Arizona National Guard also played a critical role in this response. One thing is clear: The more aggressive approach downtown was needed, and it worked. Now, more needs to be done, in more places around the state, to protect law and order and public safety. The looting and violence we saw last night, especially in Scottsdale, simply cannot be tolerated. And it won’t be. Destruction of property does not qualify as freedom of expression. I will be speaking with mayors around the state throughout the day to ensure plans are in place to prevent this kind of lawlessness tonight and beyond. The state will provide whatever resources we can, through DPS, National Guard, and cross coordination of local law enforcement, but every community needs to be prepared. What we are seeing is happening in cities and states everywhere in America, and Arizona leaders need to be on high alert. They need a plan. Today should be a working day for every local elected leader, city manager, police chief and sheriff in every jurisdiction in the state. The death of George Floyd is tragic and abhorrent. It should be condemned by leaders at all levels ⁠— and we should listen to those who seek to have a civil dialogue on how to ensure it never happens again. In Arizona, we will listen ⁠— and this was demonstrated by the leadership DPS Colonel Heston Silbert displayed on Thursday night as he engaged with protestors at the Capitol. This kind of leadership from law enforcement, working with community leaders, will get us through. But we cannot, and will not stand for violence, looting, and criminal activity.”

Declaration of State of Emergency
*Imposition of Curfew*

WHEREAS, lawful assemblies are the lifeblood of our democracy based in the constitutional rights that we all hold so dear; and

WHEREAS, in the past week, individuals have engaged in legal and peaceful protests throughout the nation and world; and

WHEREAS, certain persons have engaged in riots resulting in assaults, vandalism, violence and criminal damage; and

WHEREAS, the violent civil disturbances and riots have continued and grown nationally and in Arizona, endangering additional lives and property; and

WHEREAS, on May 28, 2020, a protest was held in downtown Phoenix, however, after ending, a number of those attending did not disburse and began to cause a civil disturbance and riot causing damage to police vehicles with officers in them, vandalizing government buildings and throwing rocks and other items at police; and

WHEREAS, on May 29, 2020, following a peaceful vigil, some participants again headed to downtown Phoenix where their demonstration escalated resulting in additional vandalization and damage to government and private business buildings, fireworks being launched toward police, streets being blocked and reporters being assaulted; and

WHEREAS, on May 29, 2020, the downtown area of the City of Tucson was also vandalized by persons who burned dumpsters, blocked streets and destroyed property; and

WHEREAS, on May 30, 2020, protests continued in downtown Phoenix and downtown Tucson resulting in additional damage to property, and looting occurred in downtown Scottsdale at multiple businesses in the Scottsdale Fashion Square Mall and the surrounding area; and

WHEREAS, the level of disturbances and danger to persons and property has continued to increase with information suggesting that civil disturbances will expand to other areas of the State; and

WHEREAS, to date, as this violence spreads, it is necessary to have a statewide response to maximize the resources of law enforcement and other government support services to ensure the safety of persons and property; and

WHEREAS, the State understands its obligations to permit expressive activity subject to reasonable time, place and manner restrictions necessitated by the existing public safety concerns for citizens, public safety employees and protestors; and

WHEREAS, one of the primary purposes of government is to protect its citizens, maintain order and balance the rights of all individuals; and

WHEREAS, due to these conditions, and pursuant to Arizona Revised Statute (A.R.S.) § 26-301, “conditions of…extreme peril to the safety of persons or property within the state caused by…riot…or other causes…which are or are likely to be beyond the control of the services, personnel, equipment and facilities of any single county, city or town, and which require the combined efforts of the state and the political subdivision” exist to support a declaration of emergency; and

WHEREAS, pursuant to A.R.S. § 26-303(D), these circumstances necessitate a declaration of emergency.

NOW, THEREFORE, I, Douglas A. Ducey, Governor of the State of Arizona, by virtue of the authority vested in me by the Constitution and laws of this State, including but not limited to, A.R.S. 26-303, hereby order as follows:

Declare that a State of Emergency exists in Arizona due to riots, effective Sunday, May 31, 2020 and continuing.

During the hours of curfew, all persons are prohibited from using, standing, sitting, traveling or being present on any public street or in any public place, including for the purpose of travel, with the following exemptions:

All law enforcement, firefighters, paramedics or other medical personnel, National Guard, as well as any other emergency response personnel authorized by the State of Arizona, and credentialed members of the media.

Individuals traveling directly to and from work; attending religious services; commercial trucking and delivery services; obtaining food; caring for a family member, friend, or animal; patronizing or operating private businesses; seeking medical care or fleeing dangerous circumstances; and travel for any of the above services.

For purposes of this order, “travel” includes, without limitation, travel on foot, bicycle, skateboard, scooter, motorcycle, automobile, or public transit, or any other mode of transporting a person from one location to another.

For purposes of this order, “public place” means any place, whether on privately or publicly owned property, accessible to the general public, including but not limited to public streets and roads, alleys, highways, driveways, sidewalks, parks, vacant lots, and unsupervised property.

For purposes of this order, “exempt care” means necessary medical services for an individual’s self or family member.

Direct that the State of Arizona Emergency Response and Recovery Plan be used, and the Division of Emergency Management to be engaged, as necessary or requested, to assist in managing the emergency.

Authorize the Adjutant General to mobilize and call to activate all or such part of the Arizona National Guard as is determined necessary to assist in the protection of life and property throughout the State.

IN WITNESS WHEREOF, I have hereunto set my hand and caused to be affixed the Great Seal of the State of Arizona.

DONE at the Capitol in Phoenix on this thirty-first day of May in the year Two Thousand and Twenty and of the Independence of the United States of America the Two Hundred and Forty-Fourth.