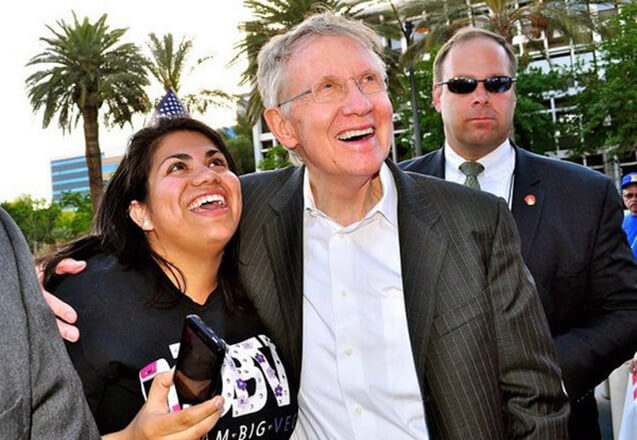 If a politician is pressing for a new early-parole law, he will highlight one inmate who turned his life around, even if most don’t. It’s a feel-good thing, and if you disagree with the policy, well then you are just being mean to the fellow who turned his life around, you uncaring privileged American. Sadly, this nonsense is effective in American political persuasion and lawmaking.

In his immigration speech last night, President Obama told us of a girl named Astrid Silva:

Tomorrow, I’ll travel to Las Vegas and meet with some of these students, including a young woman named Astrid Silva. Astrid was brought to America when she was four years old. Her only possessions were a cross, her doll, and the frilly dress she had on.

When she started school, she didn’t speak any English. She caught up to the other kids by reading newspapers and watching PBS, and became a good student. Her father worked in landscaping. Her mother cleaned other people’s homes. They wouldn’t let Astrid apply to a technology magnet school for fear the paperwork would out her as an undocumented immigrant – so she applied behind their back and got in.

Still, she mostly lived in the shadows – until her grandmother, who visited every year from Mexico, passed away, and she couldn’t travel to the funeral without risk of being found out and deported. It was around that time she decided to begin advocating for herself and others like her, and today, Astrid Silva is a college student working on her third degree.

Astrid wasn’t picked out of obscurity by the President. Her story has been used repeatedly in Nevada by Senator Harry Reid. She is an activist for a group called the Progressive Leadership Alliance of Nevada, committed to such leftist dog whistles as anti-fracking and “social justice.” The President didn’t find her toiling through life as an underground immigrant working in a car wash. By mentioning Astrid, he was rewarding a good liberal soldier, who attends the University of Nevada at Las Vegas.

Since the President and Astrid herself have thrust her story into the public light, I certainly can’t be seen as an uncaring, racist xenophobe (but I will) if I inquire about her story a little further. She is helping to steer an extremely important public policy. That gives the rest of us the right to know more about her.

So we’d like to know — who paid for Astrid, 26 years old, to stay in college long enough to earn three degrees? There are several reasons why we would like to know.

First, doesn’t it belie the President’s point that the lives of people who come to America illegally are so tough that he simply had to take immediate executive action to cure all that ails them? Attending an American University studying for a third degree, working as a political activist and being pen pals with the Senate Majority Leader doesn’t conjure up the same vision as a Syrian refugee looking for food. Where was the emergency here?

Second, there is a more important issue to discuss about how Astrid Silva is paying for college: Many middle-class American citizens can’t go to college because they can’t afford it.

Do you know what happens to those young Americans in that donut hole, Mr. President? They don’t get to go to college. Their parents honorably make enough money to stay off the public dole and stay out of their neighbor’s pockets, but fall short of qualifying for enough bank loans to pay for school, particularly when they have multiple college-aged children in the household.

When my own daughter went to her first year at college, she met a boy from Afghanistan. He described to her that he was on a program that not only gave him tuition to an American school, but also money to send home to his family to help support them while he was here. He further described that he wanted to get out of his dorm because his roommate, an Afghan going to college on the same deal, absolutely despised America and voiced that opinion all the time. (Aren’t anecdotal proofs helpful, President Obama?)

So what are the possibilities for Astrid to have paid for college? There are several answers, but each comes with additional questions. For instance, is the government already helping her go to school, which would even lessen the reason for seemingly urgent action by the President?

I understand she attends UNLV, and 27.2% of their revenue comes from the State of Nevada. So she, like all students there, is subsidized by the government. While that lessens her cost, it doesn’t pay for Astrid to go to school. How did she pay for the rest of her tuition? Let’s examine some possibilities.

1. She won scholarships. If she did, congratulations. Were they based on need? If so that’s even more help she received and less reason for her to complain about her situation. Some also might argue there are plenty of needy American kids in the middle class who could have used that money.

2. She and her parents paid for it. Congratulations if they did. That’s quite a bit of money to save. However, we have the right to know whether they were able to save that money by not having social security numbers and failing to pay income tax. Normally this would be none of our business, but she’s making herself the story here, not us.

3. She applied for and received a Deferred Action for Childhood Arrivals (DACA) status, which allowed her to get a Social Security number, fill out a FASFA form and receive state aid for her tuition. If this is the case, good for her. However, again we have a situation of an illegal immigrant being wholly taken care of by the rest of us, while claiming to be left out in the cold by us.

I don’t feel good about inquiring of her about this. My usual libertarian philosophy is “leave your neighbor alone.” However this neighbor may be reaping the benefits America provides while at the same time shaming us into giving her more.

If that’s the case, then we have the right to know how Astrid Silva paid for her college. In fact, this may be a teachable moment. Perhaps Astrid can enlighten all those middle-class American kids who fall into the donut hole how they too can pay for college.

Finally, she should follow President Kennedy’s urging toward gratitude and publicly thank America for a life situation that allows her to earn three degrees, illegal immigrant or not.