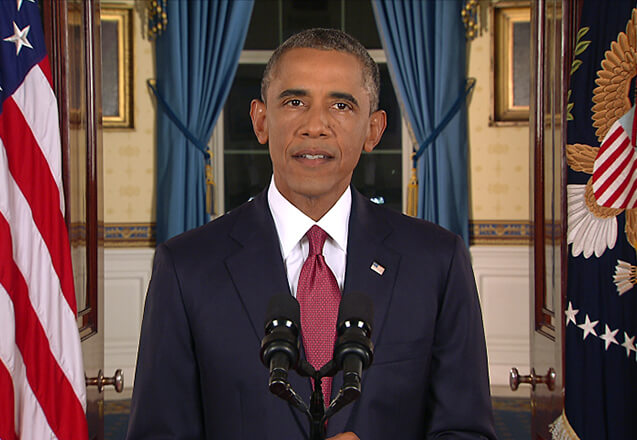 It’s all very confusing. When George W. Bush considered invading Iraq without a declaration of war, the Democrats wanted to try him for war crimes in The Hague. When Obama does the same thing … crickets.

Which raises another question: Where exactly is the anti-war movement?

Have you see a single “No Blood for Oil” sign in Cambridge?

To paraphrase the John Kerry of 2004: “Can I get me a candlelight vigil here?”

Whatever happened to Cindy Sheehan? Where is Code Pink? I haven’t seen an “EndLESS War” bumper sticker in years, since 2009 to be exact.

The anti-war movement is MIA as this war, er, counter­terrorism operation, begins. Back when Bush was waging war, dissent was the highest form of patriotism. Now it’s “racism.” If you speak truth to power in the Obama era, they call it hate speech. The IRS will audit you.

I thought the moonbats didn’t want the U.S. “going it alone.” You hear that phrase on the networks now about as often as you hear the words “full employment.”

And why is the president so outraged about a couple of beheadings? When a Muslim terrorist yelling “Allahu akbar!” murdered 13 servicemen at Fort Hood, Obama shrugged it off as “workplace violence.”

Now the polls are so bleak for the Kenyan Katastrophe, CNN doesn’t even mention them anymore. . . .

Can I get me a “War Is Not the Answer” bumper sticker here? Not in Cambridge I can’t.

I quote Carr at length because his latest column is a tour de force. To be fair, however, Obama has attracted some criticism from the left. On Friday, Bruce Ackerman did write in The New York Times the following: “President Obama’s declaration of war against the terrorist group known as the Islamic State in Iraq and Syria marks a decisive break in the American constitutional tradition. Nothing attempted by his predecessor, George W. Bush, remotely compares in imperial hubris.” And, in making his point, Ackerman rightly pointed out that Bush twice sought and got Congressional authorization for what he did when he initiated — let’s not kid ourselves — wars . . . in Afghanistan and Iraq.

There is, of course, this difference between George W. Bush and Barack Obama. The former invaded Afghanistan and Iraq on a calculation (right or wrong) that upsetting and reordering the status quo in those countries would make the United States more secure. The latter announced — and I emphasize the speech act because this President systematically confuses word with deed — that we would be bombing ISIS on a calculation that such an announcement might help his party in the November election.

Barack Obama really does have a strategy. But it has nothing to do with the security of the United States and its citizens. His aim, as he put it late in the presidential contest in 2008, is “to fundamentally change America.” That is why he called his administration The New Foundation. He has always regarded international affairs as a distraction from the revolution he wants to carry out here at home, and he has done abroad what he has done — killing Osama bin Laden, firing missiles at suspected adherents of Al Q’aeda, and the like — chiefly in order to fend off such distractions. He is not called No-Drama Obama for nothing.

But when the leaders of ISIS had James Foley and Steven Sotloff beheaded, they made of themselves a distraction that could not be ignored; and the speech delivered Wednesday night was a desperate attempt to fend it off and to rally the American people behind the President . . . and his party.

In thinking about all of this, we should not engage in tomfoolery. The United States has no military strategy in the Middle East. The men in uniform told the President that, in the absence of American boots on the ground, the situation was hopeless; and, mindful of the trouble that putting boots on the ground would cause him domestically, above all within his own party, he rejected their advice. What we saw on Wednesday night was another of Obama’s gestures. What we saw was a pose carefully calculated — executed by a poseur unexcelled.

So the question in my title is, in fact, legitimate. Is killing people via bombing strikes a war crime if it serves no larger strategic purpose, if it is a feckless act apt only to enrage against us those Sunnis who desperately fear the Shia, if it is a cynical maneuver aimed solely at improving the President’s standing in the polls? It is, after all, one thing to seek victory and another to engage in aimless mayhem.

Consider this. Why did the President not seek Congressional authorization? There is no question that Congress would have voted to approve military operations in Iraq and Syria. But, had the President asked for authorization, there would have been a problem.  There is a faction in the Democratic Party — the faction that made Barack Obama, rather than Hillary Clinton, the Democratic Presidential nominee in 2008. Its most resolute members would have voted against the resolution; and the party split, which would have been bitter, would have further depressed Democratic turnout in November. With this President, domestic political calculations trump everything else.

Mark my words. We as a nation are in for further embarrassment. The chief reason why the Framers gave us a unitary presidency rather than a committee was that they recognized the need in foreign affairs for secrecy, vigor, and dispatch. What they did not foresee was that someday, in a fit of mad self-indulgence, we would elect and then re-elect a President who — in his hostility to the regime they established — would subordinate his handling of international affairs to his personal goal of destroying what they had built.

All of this is apt to end in tears — and not just for you and me. For short-term expedients — such as the half-hearted program outlined in Wednesday night’s speech — rarely, if ever, produce anything but further trouble. The war in Iraq and Syria really is a war of Barack Obama’s making. Had he kept a body of troops in Iraq to encourage Maliki to honor the arrangements he had worked out with the Kurds and the Sunni, Al Q’aeda in an even more malevolent form would not have made a comeback. Had he vigorously backed the secular reformers in Syria,  Bashar al-Assad would have been ousted some time ago, and ISIS would never have secured a foothold. His fecklessness in the past is now, however, going to be compounded by his fecklessness in the present. We — and he — are bound to suffer further humiliation.

The President no doubt supposes that he will be able to extricate himself from the consequences of his folly by further speech-making. He is adept with his tongue, and our servile media will doglike come to the man’s aid. But, in this regard, Barack Obama is like the little boy who cried, “Wolf!” The time is coming when only the most slavish and shameless of his partisans will pay him heed.