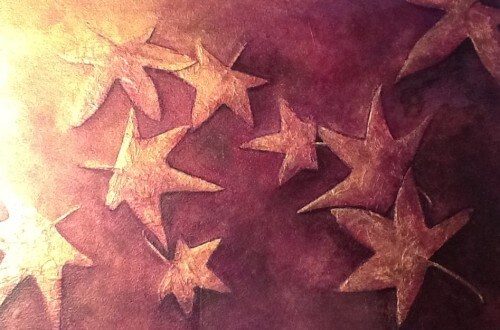 I could feel a tightness in my throat and my heart beating harder as I read the words on the page. Holden Caulfield was drunk in a New York bar, his depression consuming him.

I could hardly see straight. When I was really drunk, I started that stupid business with the bullet in my guts again. I was the only guy at the bar with a bullet in their guts. I kept putting my hand under my jacket, on my stomach and all, to keep the blood from dripping all over the place. I didn’t want anybody to know I was even a wounded sonuvabitch.

My face warmed and tears fell—not from sadness but from an overwhelming sense of understanding. I laid the book against my chest and let myself feel what Holden was feeling with his imaginary gunshot wound. I could because I knew it so well. The bullet in my gut. The blood dripping. Not wanting anyone to know I was wounded, or at least not wanting to explain it. I didn’t want to answer the question, “What’s wrong?” I have a bullet it my gut! Blood is dripping everywhere! That’s what’s wrong!

I didn’t think anyone would understand. How could they? But J. D. Salinger understood: Losing part of yourself—the most innocent part—in the face of too much pain. That understanding, that connection to another’s presence, to another’s suffering, gave me peace. I wasn’t alone.

Such is the power of the artist—of anyone really—who is fully present, expressing themselves, their hurts, their joys, their insights in a way no one else can. This kind of power can’t come from parroting others. It can’t come from mass production of black velvet portraits. It can’t come from conformity to a standard someone else has set. It has to come from the unique thoughts and experiences of the free individual—the wellspring of originality and life itself.

Art is the true expression and presence of a self-aware individual—and we’re drawn to it like the old man is drawn to the sea. We love “the original.” We love to encounter something we’ve never seen before. Why is that? Is it just that we’re bored and we want to be titillated with something new and shiny? I don’t think so.

I think we are drawn to creativity and originality because we love life, we love what is real, we love what is true. In that moment, as we come face to face with someone being purely themselves, we see ourselves. Our own humanity is reflected back to us, and in that reflection, we are part of something bigger—not consumed by it, but participants in it. We are individuals, but we’re not alone.

Performance artist Marina Abramovic understood this in her work “The Artist is Present” at the Museum of Modern Art in 2010. The exhibition was simple. Marina sat in a chair for hours as people came one by one to sit across from her and look into her eyes. Some people wept. Some laughed. Some seemed to pray. No one said a word, but in those moments, as Marina allowed herself to be present, to connect with the person across from her, art was created: The beauty of human connection in the midst of presence and encounter—two individuals, fully aware, joining as one.

We have two philosophical tensions in this world. First is the idea that human flourishing comes from society, from the collective. This Eastern idea is expressed at its most extreme when the individual is lost to the group and originality and diversity are consumed by conformity “for the greater good.” The result is despair as we lose ourselves in a cold and mechanistic construct designed and controlled by those in power.

Second is the more Western philosophy that flourishing comes from everyone being free to be themselves. The extreme of this view is when life becomes reductionistic, atomistic, and when the individual is cut off from others; everyone is just out for themselves. The result—like that of the individual lost to the collective—is despair, because we can’t be happy when we’re disconnected from others. Human beings will never flourish in isolation.

I believe the artist—maybe even more than the philosopher or the theologian or the scientist (and certainly more than the politician)—can bridge these two worldviews. Happiness comes from the wellspring of the free individual, but being a free individual drives us toward one another, not away.

When you are free, when you are truly yourself, and when you are present to others, you connect with the world around you. You are bigger as a result. You are flourishing. You are happy. But that can’t happen if you aren’t free to be and express yourself—without freedom of the will and the mind, there is only bondage. The irony is that the greatest inhibitor to our freedom is often not an exterior force—it’s the fears and insecurities inside our own minds.

Fear has robbed them of their freedom to be themselves. That loss keeps them from making human bonds (or at least real, satisfying ones), and they drown in isolation and loneliness. Ironically, they think the answer to that isolation is to build false social constructs through acts of conformity in pop culture, cult-like religious groups, social engineering, and community planning (and collectivists are there to lead them into the trap). But these social constructs are contrived. They’re an illusion to true human connection. They’re phony because they’re not built on the foundation of the free individual.

Authenticity only comes through a person being himself and herself, open, and willing to connect with others.

Can you think of a time when you met someone who made you feel better about yourself simply by being in their presence? Thoughts of them lingered in your mind long after you met them. There was just something about them that affected you, even though you couldn’t exactly put your finger on what it was. The reason you felt that way is because that person was fully present. You encountered them as a truly free individual—free from external and internal restraints—and that encounter enriched, even changed, you.

Can you think of a work of art you’ve seen, a piece of music you’ve heard, a book you’ve read, a film you’ve watched that moved you in a way nothing else ever has? You can’t always describe what that ineffable quality is, but it’s real and you connect with the artist through his or her work. As a result, you feel a sense peace because—in some strange way—you are more complete than you were before you read those words or heard those chords or saw those forms on the canvas.

That kind of human expansion—flourishing—can only happen when individuals are free and when they actually express and act on that freedom in an honest and open way. Whether it’s in art or everyday life, if we’re not real and open to others, we will never be truly happy. We’ll be isolated as we fail to connect with those around us, or we’ll become lost in phony constructs built to mimic human connection. Either way, we’ll grow smaller and smaller until there is nothing left.

Only by being free as our true selves will we be present to others and give them the sacred gift of looking into our eyes and seeing the golden reflection of their own greatness.