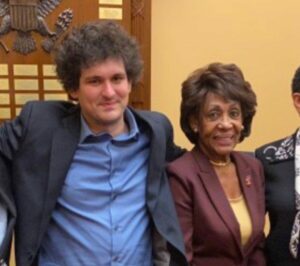 Before November 8, I’d never heard of Samuel Bankman-Fried (SBF). I’d never heard of FTX. I didn’t know that SBF and FTX bought naming rights for the arena where the NBA’s Miami Heat play, nor the University of California at Berkeley’s football stadium.

While I’ve heard of Bitcoin, Ethereum, DogeCoin, and maybe one or two other cryptocurrencies, I’d never heard of FTT, SBF’s creation. I never knew about all the love SBF bought from cultural icons like Larry David or football legend Tom Brady, who did commercials for FTX I never saw.

I was unaware that Sam Bank-Friendman was the Democratic party’s second-largest individual donor – over $10 million for Joe Biden’s presidential campaign in 2020 and another $39 million for the 2022 election – behind George Soros and ahead of Michael Bloomberg.

I was unaware of SBF’s numerous conference appearances, testimony, and $300,000 in financial contributions to House Financial Services Committee members. From the Washington Free-Beacon:

While Bankman-Fried has donated to Republicans, more than 95 percent of his contributions have gone to Democrats and Democratic committees. Along with top FTX executives, he contributed to seven Democrats and two Republicans on the Financial Services committee. They gave to five members of the committee’s Digital Assets Working Group, which Waters launched last year to “support responsible innovation that protects consumers and investors” and to craft regulations for the industry. To date, the Digital Assets Working Group has not proposed regulations for the industry, which some lawmakers say would have blunted the impact of FTX’s bankruptcy on its customers.

Bankman-Fried and his brother Gabriel gave $40,300 in all to Torres’s campaign and two of his political committees, the Torres Victory Fund and La Bamba PAC. Bankman-Fried and the head of FTX’s regulatory division gave $16,600 to Gottheimer, while other Bankman-Fried associates contributed $500 to Himes and $9,100 to Casten.

And frankly, I’d never heard of “effective altruism.” It looks like old-fashioned philanthropy to me, except when it’s not.

Since I know little about cryptocurrency other than the promises of blockchain technology – which is very cool with terrific supply chain benefits – I’ve stayed away from it.

Until now. This scandal has all the hallmarks of a terrific book and movie – already underway via “The Big Short” and “Moneyball” author Michael Lewis – and the corrupt interchange between “woke capitalism,” politics, and the government regulators who turned a blind eye, and worse. There’s even sex involved, apparently. Quick poll: who plays SBF in the movie? Too bad Seth Rogan is too old for the role. There aren’t many frumpy 30-year-olds with unkept perms in Hollywood. From Yahoo!News:

The top Republican on the Senate Banking Committee, Senator Pat Toomey, writing in a tweet, quote, “Congress’ failure to pass legislation creating regulatory guardrails for crypto trading, combined with the complete hostility and lack of transparency by the SEC (Security and Exchange Commisssion), has generated a debilitated amount of legal uncertainty.” The SEC reportedly met with FTX and former CEO Sam Bankman-Fried several times before the crypto firm filed for bankruptcy.

Rumors have surfaced that SEC chairman Gary Gensler helped Bankman-Fried with regulatory loopholes, trying to avoid certain filings, though that has not been corroborated. Representative Tom Emmer (incoming US House Assistant Majority Leader) tweeted, quote, “Interesting. Gary Gensler runs to the media while reports to my office allege he was helping SBF and FTX work on legal loopholes to obtain a regulatory monopoly. We’re looking into this.”

Who says money doesn’t buy you love in politics? Very altruistic! Why do Democratic scandals always seem to happen after elections? Well, not all, but those get censored.

We may have been ignorant of all this, but we’ve heard about it now. Perhaps you’re one of the million or so FTX customers who may have lost your investment in what has been described as fraud, a “Ponzi scheme.” I’m sorry.

Sam Bankman-Fried is the Bernie Madoff (another reliable Democratic contributor) of this generation, eclipsing Theranos founder Elizabeth Holmes (a reliable Republican contributor), who was sentenced to jail last week. And those who do not learn from history are doomed to repeat it. Many old lessons are being retaught, even to the best and brightest among us. On Holmes’s sentencing, courtesy of the New York Post:

She was ordered to begin serving the sentence April 27. Her lawyers have two weeks to file an appeal and are expected to ask the judge to allow her to remain free on bail during the process.

Holmes’ 135-month sentence was below the 15 years requested by prosecutors, who also sought $804 million in restitution for 29 investors.

The amount covers most of the nearly $1 billion that Holmes raised from a list of sophisticated investors that included software magnate Larry Ellison, media mogul Rupert Murdoch and the Walton family behind Walmart.

Davila ordered Holmes repay $121 million to 10 investors, including Murdoch and former Wells Fargo CEO Richard Kovacevich, who sat on the company’s board, according to the New York Times.

Welcome to the world of risk, my millennial friends and family. All the old sayings remain true. If it is too good to be true, it probably is.

If you are still struggling to understand the story behind the FTX scandal, Business Insider has a superb primer. Michael Green, writing for former New York Times editor Bari Weiss’s Substack site, Common Sense, has more. These two posts will get you caught up. The Ringer will give you an even more sordid, if cynical deep dive.

Even the Biden Administration’s politically-tainted law enforcement agencies won’t be able to ignore this one. I suspect they will get a very capable assist from the incoming chair of the US House Financial Services Committee, Patrick McHenry (R-NC), who termed this an “Enron moment.” Speaking of financial scandals.

Speaking of FTX, much is being made of SBF’s connection to Ukraine, including suggestions that tax money was laundered through FTX back to the US to help politicians. There’s no doubt of a Ukrainian connection that is worth exploring by investigators. That is a severe allegation. The Daily Wire:

Earlier this year, Bankman-Fried launched an initiative alongside Ukraine’s Ministry of Digital Transformation to fundraise for the embattled nation, which has received billions in humanitarian and military aid from the Biden administration, marking “the first instance of a cryptocurrency exchange providing a conduit for crypto donations to a public financial institution,” according to a press release from a Ukrainian-based cryptocurrency firm. FTX converted the donations into fiat currencies and transmitted the funds to the National Bank of Ukraine.

But as the legal, law enforcement, publishing, and other communities sort this out, the rest of us should give the hairy eyeball to how woke fads such as “Effective Altruism,” or EA, are used to hoodwink everyone from investors to employees. It is summarized, charitably, by the title of a book by Scottish philosopher, vegetarian, and Climate Change alarmist Will McAskill, “Doing Good Better.” One commentator at goodreads.com, an open forum book review site, further explains: “It’s important to use evidence and reason when evaluating the impact you can do, both in terms of donations and using your career to make a difference.” Like this?

McAskill, who famously lunched and schooled SBF over EA a decade ago, took to Twitter after FTX’s collapse:

I don’t question MacAskill’s sincerity or anger and respect his sentiments. But perhaps he might better understand this more cynical view of EA, again from The Ringer:

A supposedly enlightened inversion of the old moneybags mantra “greed is good,” the school of effective altruism contends that maybe good … needs … greed? Earn to give, bitches! Effective altruism, often referred to as EA, is a real Rorschach test of financial morality: It is an ethos that combines an old-timey and genuinely philanthropic you-can’t-take-it-with-you spirit with a futuristically steely and extrapolated paper-clip-maximizing mindset. (EA adherents vary wildly on the ideal ratio between the two.) . . . EA has the ear of, and significant influence over, a lot of the extremely rich and powerful. Bankman-Fried is—was—one of them, though his commitment to the philosophy remains an open question.

As the Carolina Journal notes, “The group (FTX) also held utopian visions of how they would save the world through their philosophy of “effective altruism.” Part of this altruistic worldview apparently involved making major donations to the Democratic Party.”

In reality, today’s very trendy woke capitalists assume the pose of do-gooders while filling their bank accounts with outsized wealth. And the world is charmed by their charade, which not only allows them to get away with fraud and theft, but prompts cheering from those whom they are stealing from. It’s quite the trick!

The simple truth, as Caitlin Flanagan has written, “is that you cannot simultaneously dedicate yourself to making untold fortunes for a giant corporation and to championing a social good.”

Another champion of EA is philosopher Peter Singer, best known for his enthusiastic support of voluntary assisted suicide and defense of infanticide.

I have another thought about EA. Maybe give back or contribute these tainted dollars to charity. “Two such candidates, Rep. Kevin Hern (R-OK) and Rep. Jesus “Chuy” Garcia (D-IL), donated their respective $5,000 and $2,900 contributions to charity after FTX filed for bankruptcy, according to a report from The Block,” noted The Daily Wire. Good for them. That should probably go for contributions to right-leaning causes and political committees made by SBF’s FTX co-CEO, Ryan Salome.

To turn an old phrase, the corrupt will always be with us. We’ll see more of these fraudulent get-rich-quick schemes in the future, human nature being what it is. Maybe we will all get better at spotting them. Sometimes, people aren’t as brilliant, successful, or “altruistic” as they look. Gullible people are born every minute, as a famous carnival showman is attributed to having once said.

As for “essential altruism,” it should involve giving without expecting a quid pro quo. That, by definition, exempts political parties, whose currency is precisely that. There’s nothing “altruistic” about giving $39 million to political committees, which should have been a big red flag to someone.

SBF also “invested” in several left-leaning media sites, including The Atlantic, The Intercept, ProPublica, and Vox, and provided startup money for Semafor. Not much altruism there, either.

If these politicians and political entities really want to do good, they can start by doing the right thing, as Reps. Hern and Garcia did. And corporate virtue signalers should ask for their money back from corrupt causes and do a better job of due diligence. Shareholders should step up and demand no less. Virtue signaling is a bad look, especially when it’s under pressure to act quickly.

As constitutional lawyer Ilya Shapiro notes, “The right thing to do is the right thing to do.” I will be delighted to recommend several excellent non-profits that effectively “do good better.” And they don’t include political parties.