Several years ago, a friend asked me when I thought that couples could stop working so hard at their marriages. My one-word answer: Never.

In these times, people have figured out that they can’t cruise through marriage and often decide to just play house; it seems so much easier than pursuing a mature, committed relationship. For those who are utopian dreamers, they will never find perfection in marriage either, no matter how hard they try. Reality will always show up to ruin their expectations.

So, if marriage is such darned hard work, maybe the younger folk have the right idea. Just hook up, make-believe, exchange partners, and play the field. They eventually discover, however, that pursuing one’s life in these miscellaneous partnerships is lonely and empty.

There was a time when I told my husband (my then-boyfriend) that I didn’t think I’d ever get married. (I’m not sure if I said that because I believed it, or because I was trying to keep him at a distance.) To complicate matters, I was a secular Jew and he was a fallen-away Catholic. Still, we eventually discovered how we shared so many other values and beliefs, and we married.

I was not an easy spouse at the beginning. I had the naïve belief that part of his job was to make me happy. I expected him to talk about his feelings (although if he had, I probably would have been terrified about what to do with that information). I was an unhappy, tyrannical spouse.

But eventually I realized (and I have no idea what was the source of my enlightenment), that I was going to destroy my marriage if I continued to make outrageous demands and behaved like a confused and immature teenager. By some miracle, my husband patiently tried to figure out what I genuinely wanted, and the wound I’d created between us began to heal itself. I realized that if he wasn’t the “perfect” husband, I’d married him because he had many special qualities that I admired and appreciated. Especially the fact that he had put up with me.

We’ve learned how to navigate the potholed roads and inclement weather of life: we literally had an accident due to an unexpected pothole that we braked for while a semi-truck rear-ended us in our Toyota Corolla. (We drove away from the scene and he didn’t.) We’ve lived through hurricanes, tornadoes, blizzards, and ice storms. But our memories are also filled with verdant landscapes through our many trips cross-country and the beauty of a light snowstorm drifting past the window as we sat in front of the crackling fireplace.

We know the importance of validating our love through kind words, assurances, gratitude, laughter, curiosity, and compromise. We both now talk about our feelings, willingly and with a full heart.

When times are tough, we rally our emotions and hold on to each other. Disappointments, betrayals by others, illness, and changes in plans were traumatic at one time, but as we mature, at least one of us reminds the other to step back and breathe. That’s usually all we need to do to re-center ourselves. 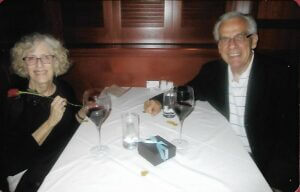 Anniversary dinner from a few years ago

The truth is, marriage is hard work.  Today is our anniversary, and we are incredibly grateful for the blessings, challenges, surprises, and laughter we’ve shared over 48 years.

I can’t imagine changing a single moment, or being wedded to any man other than the one I so love and admire.