Faithful Catholics all over the US have been waiting to hear from Pope Francis on the recent SCOTUS decision on Dobbs and the overturn of Roe v Wade. Receiving a joyous and heartfelt message from the Pope would be a great gift to all those who have prayed and sacrificed and worked for this day.

However, it wasn’t what we expected. As one has heard, a picture tells a thousand words. 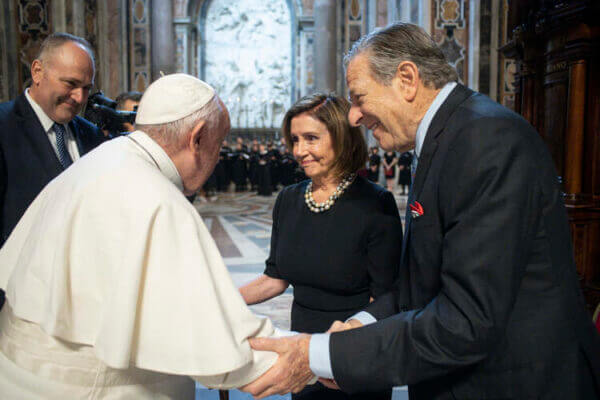 Pope Francis, greets Speaker of the House Nancy Pelosi, D-Calif., and her husband, Paul Pelosi before celebrating a Mass on the Solemnity of Saints Peter and Paul, in St. Peter’s Basilica at the Vatican, Wednesday, June 29, 2022. Pelosi met with Pope Francis on Wednesday and received Communion during a papal Mass in St. Peter’s Basilica, witnesses said, despite her position in support of abortion rights. (Vatican Media via AP)

For some reason, Nancy Pelosi, one of the most prominent pro-abortion Catholic politicians (and perhaps the face of the movement) just happened to be at the Vatican on June 29. According to this article, Pelosi met with Francis on Wednesday before the Mass and received a blessing, and then received Holy Communion at the papal mass in St. Peter’s on the Solemnity of Saints Peter and Paul. What a coincidence. And what a scandal. And what a slap in the face to Archbishop Cordileone who publicly reprimanded Mrs. Pelosi and forbade her from receiving Holy Communion until she publicly repents of her pro-abortion beliefs and activities.

Now some will say, Scott, you darn rigid restorationist you, you just hate Vatican II, and that is why you always bring up these Pope Francis scandals. How in the world can this merciful pope know everything there is to know about the USA?

Well, for one thing, he was aware of the horrific deaths of the illegal immigrants near San Antonio and sent out a tweet asking for prayers.

I sorrowfully heard the news of the tragedy of the #migrants in Texas and #Melilla. Let us #PrayTogether for these brothers and sisters who died following their hope of a better life; and for ourselves, may the Lord might open our hearts so these misfortunes never happen again.

It is a monumental scandal that Pope Francis allows this to happen. From his homily at the mass:

Francis has strongly upheld the church’s opposition to abortion, and on Wednesday said church leaders must “continue to care for human life.” But in his homily, Francis also instructed the new archbishops to welcome everyone into the church, including sinners, and to not “remain pinned to some of our fruitless debates.”

“So many times we become a church with open doors, but only to send people away, to condemn them,” he said.

This is standard doublespeak for the pope. Yes, one welcomes sinners, but one also calls them to repentance. He says he is opposed to abortion – going so far as to call it murder, yet allows Holy Communion to be given to a manifest grave sinner such as Nancy Pelosi. Yes, the pope is a head of state, and must meet and greet all types, but he is first and foremost the Vicar of Christ (a title that he has erased) and a pastor of souls. As one said before, this is a monumental scandal. And Pelosi will run with it – she will continue to use these types of photos and the fact that “she received Holy Communion at a papal mass” to push for abortion.

I would be pleased if someone can point me somewhere to see that the pope has praised and celebrated the overturn of Roe v Wade. Yes, the gutted Pontifical Academy for Life issued a short statement, but it was very weak and bizarrely said nothing to simply condemn abortion unequivocally and celebrate the victory.

Instead of commending #SCOTUS for overturning #RoeVWade, the @PontAcadLife called for "reopen[ing] a non-ideological debate" about abortion. Why won't @PagliaAbp simply condemn abortion unequivocally and celebrate this victory?@MLJHaynes reports: https://t.co/ZXwzUBUUZ7

Perhaps one day popes and cardinals and archbishops will use their authority to crack down on these pro-abortion politicians in the US and fervently work to change their minds and save their souls. Until then, we will continue to see more of this:

The "devotedly" Catholic president is back at it @JoeBiden pic.twitter.com/iVCVtknB8N