Never ones to let a “crisis” go to waste, President Biden and his fellow travelers are working overtime to accuse Republicans of being behind election violence threats.

“President Joe Biden urged Americans to vote in favor of democracy, reject election-denying candidates, and be patient with results ahead of the first national Election Day held since the Jan. 6 attack on the U.S. Capitol,” screamed CNBC in its coverage of Biden’s Union Station speech last Wednesday.

Here we go again; the rush to politicize another horrific violent assault.

We see it with every terrible mass shooting. And now, with the bizarre attack on the 82-year-old husband of House Speaker Nancy Pelosi, Paul Pelosi.

Of all the abuses and politicization of Congress the past 3 years, from the pandemic to the January 6th Capitol riots, instituting proxy voting for US House floor votes may be the worst. And that’s with stiff composition from the unprecedented and partisan construction of the Special Committee on January 6th. Or forcing 25,000 mostly […]

Since Speaker Nancy Pelosi visited Taiwan in early August, tensions in the region have remained high. Experts and commentators regularly speculate about a Chinese invasion of the island in the not-too-distant future, as well as about the likelihood of American involvement on Taiwan’s behalf.

We speak with Rick Fisher, senior fellow on Asian military affairs at the International Assessment and Strategy Center. A recognized authority on the Chinese military and the Asian military balance, Fisher offers his thoughts on the current tensions over Taiwan, the potential cost of war for all sides, ways to prevent military conflict, and the need to support Taiwan’s democratic self-governance.

Maybe I’m being too picky. After all, when we look at China stealing our technology, dominating the production of our pharmaceuticals, building military bases in the South China Sea, threatening our relationship with Taiwan, buying up our land, its infiltration of foreign governments, and its production of hypersonic missiles, should we worry about the potential […]

Faithful Catholics all over the US have been waiting to hear from Pope Francis on the recent SCOTUS decision on Dobbs and the overturn of Roe v Wade. Receiving a joyous and heartfelt message from the Pope would be a great gift to all those who have prayed and sacrificed and worked for this day.

However, it wasn’t what we expected. As one has heard, a picture tells a thousand words.

Speaker of the House Nancy Pelosi is barred from receiving the Eucharist in the Archdiocese of San Francisco because of her efforts to codify federal protection for abortions, according to a May 20 statement from Archbishop Salvatore Cordileone.

While Royal Dutch Shell’s purchase of deeply discounted Russian Ural oil this week is most likely headed to Europe, I now can eliminate one source of retail gasoline for my vehicles. Shell is the most significant controller of retail gasoline sales in the U.S. – some 13% of our nation’s 105,000 retail outlets. B.P. and […]

Amidst debates among Republicans, such as the extent to which the U.S. should support and defend Ukraine, this has emerged: Do congressional Republicans need a positive, pro-active agenda to run on for the 2022 midterms? You know, like the 1994 Contract With America? Will it help? Is it politically necessary?

In December, House GOP Leader Kevin McCarthy (R-CA) said he and his caucus is rolling out a “Commitment to America” over the year. It has already started with a “Parental Bill of Rights,” queuing off Governor Glenn Youngkin’s success with the issue of education with voters in the 2021 Virginia elections.

Business Insider an online subscription news service that has been making a name for itself recently with reporting on stock trading by Members of Congress, including their spouses and dependent children. Especially trades that are belatedly reported as required by law. Their extensive coverage resulted from a five-month review of financial disclosures, which uncovered apparent violations of the STOCK […]

New Year’s Day is a traditional time for new beginnings. We should all have visionary goals along with strategies and tactics to meet them, but in reality, they don’t have to be made around New Year’s Day. You can make and amend them anytime. Some may take more than a year, even a decade, maybe […] 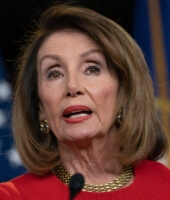 Nancy Pelosi is the face of evil in our land, and a sign of how far we have fallen as a nation. Nancy Pelosi, the once and present Speaker of the House of Representatives, led her Democrat Party caucus to pass a bill federalizing the left’s abortion absolutism, just as they seek to end our constitutional republic by stealing elections the old-fashioned way with House Resolution 4, passed in August. Commendably, no Republican member of Congress voted for either of these bills. Pelosi’s defiance of her archbiship on House Resolution 3755, the radical abortion bill, is unsurprising and shows the long failure of Roman Catholic leadership to enforce church discipline on this life and death matter.

HR 3755, the misnamed “Women’s Health Protection Act of 2021,” shows to what radical extremes the supposedly “Pro-Choice” advocates in our country will go to protect what they hold most sacred: the right to kill innocent human beings in the womb.  I support Archbishop Joseph Naumann in his demand to lawmakers to reject this “deceptively-named, extreme bill [that] would impose abortion on demand nationwide at any stage of pregnancy [and] … eliminate modest and widely supported pro-life laws at every level of government,” and, instead, that they “put the energy and resources of our federal government behind policies that recognize and support both mothers and their children.”  Any reasonable person with a basic sense of morality and inkling of decency cannot but shudder in horror at such a heinous evil being codified in law.

Join Jim and Greg as they shred the blatantly partisan attempt by congressional Democrats to add four more seats (meaning lefties) to the U.S. Supreme Court but welcome House Speaker Nancy Pelosi announcing she has “no plans” to bring the bill up for a vote. They also react to the new polling showing a sharp drop in public confidence in the Johnson & Johnson COVID vaccine since the FDA ordered a pause this week. And they examine how Michigan’s COVID numbers are very high but interest in the vaccine is quite low.