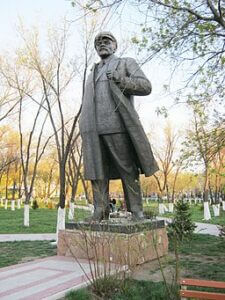 “One thing I knew: I was no longer a Communist. I had broken involuntarily with Communism at the moment when I first said to myself: ‘It is just as evil to kill the Tsar and his family and throw their bodies down a mine shaft as it is to starve two million peasants or slave laborers to death. More bodies are involved in one case than the other. But one is just as evil as the other, not more evil, not less evil.’

“I do not know at just what point I said this. I did not even know that with that thought I had rejected the right of the mind to justify evil in the name of history, reason or progress, because I had asserted that there is something greater than the mind, history or progress. I did not know that this Something is God.”

A few days ago, I finished reading the book, Witness, by Whittaker Chambers, and I am still reeling from his story. For a brief summary of the book (which doesn’t begin to do it justice), Chambers had joined and then eventually broke with the Communist party in the United States. (We could debate the morality and foolishness of his decision to join, but that’s another post.) When he quit the Party, his decision likely put his life at risk, and he also believed he had the obligation to call out Alger Hiss, who was not only a member of the Party, but who had also infiltrated several departments in the U.S. government as well as international organizations. Chambers determined that although Hiss’ ability to operate without ever being caught up to that point was nearly impossible to imagine, the fact remained that he had operated freely and had to be stopped. Chambers was well aware of many of Hiss’ actions over the years, since the two at times had worked closely together and, in a sense, became friends.

I was shocked by Chambers’ assertions in the quotation above for many reasons. In spite of his uneasiness that developed over time in working with the Communists, he felt through a kind of spiritual realization that he was compelled to leave the party. It was the specter of the massive evil that had been committed in the name of the Party, and he realized he had been complicit in that evil through his own choices and actions. By making that decision to quit, however, he knew that he would effectively be destroying his own life and that of his family.

Today, however, people are free to join the Communist Party; members of Black Lives Matter boast of their training and membership. But they have no idea about or interest in learning how depraved their participation is. They don’t care that millions of people died not so long ago in the name of Communism. They have dedicated their lives, not to a great cause, but to empty ideas, racism, a wicked religion that not only cares nothing about the people it is supposed to represent, but ridicules them for their foolishness. There are no guiding principles that unite the people who follow Communism in the United States, but only commitment to duplicity and betraying this country. BLM has spent millions of dollars on California and Canadian estates, ignored the payment of taxes on the properties, and claimed ignorance of tax law; the full scope of their illegal acts has yet to be determined.

In a state founded on Judeo-Christian principles, there is no room for an ideology that mocks the people it is supposed to serve and denigrates G-d and the religions on which this country is founded. If it is allowed to thrive, we will all suffer.

Only time will tell whether Americans like Whittaker Chambers have an awakening that brings them back to their Source and inspires them to follow that which is greater. May we all be prepared also to inspire each other and prepare to make sacrifices to save our great country.