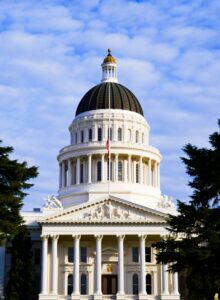 I’ve lived in California since 1964 except for a two-year tour of duty in 1990. I had started Kindergarten in Lansing, MI (where I wept every morning to the growing frustration of the teacher), but within ten weeks of having arrived to live with my grandparents and my dad to begin his job with the Lansing Parks Department, we were once again packing up the homemade trailer and heading for Sacramento.

Brown-the-father was the governor, the State of California’s government footprint was tiny, and the population was some fraction of what it is today.

Although I was born in Kittery, ME (or Portsmouth, NH, depending upon which records you have), I discovered during my two-year tour of duty on my beloved east coast … that I am by nature a California girl. That means I love the climate, the beauty of the mountains, the cold winds of the northern coast, and the spirit of the artists that barely remain in Mendocino. As for the politics, I wasn’t paying attention much until I retired. My bad.

So now that I can look back on my career and easily recognize what was happening under my nose all that time, I’m awake. And I’m pissed. “They” have ruined my state.

Here is what prompted this post — an email from Kevin Kiley, a member of the State Assembly. I am sharing it in its entirety without further comment.

Except this … Newsomussolini is proposing to send $400 to every registered vehicle owner as a way to fight inflation at the gas pump.

Idiots … we’re dealing with idiots … deluded and bent on pleasing their megalomaniacal godless father figure, Klaus Schwab. You can read my posts on The Great (Lame from Hell) Reset here and here.

Here’s the email from Kevin. This guy is the only person I’m aware of fighting for California conservatives (no, that is not an oxymoron — there are millions of us).