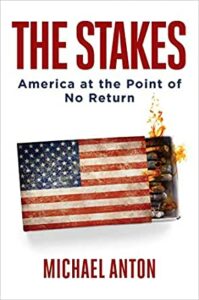 The Claremont Institute recently granted me a Lincoln Fellowship, which offers a week-plus of seminars on American politics and political thought. But first, I have to read some books. A lot of books.

One of the first I picked up was Michael Anton’s The Stakes: America at the Point of No Return (2020). Anton famously dubbed 2016 “The Flight 93 Election,” and in The Stakes, he warned of what would happen if the Democrats took the White House in 2020.

In the chapter titled “If Present Trends Continue…,” Anton made several predictions of a Biden presidency.

At least at first, immigration levels will go dramatically up and there will be no pretense of enforcement. (p. 282)

It would appear in the very near future, basic criminal law will no longer be enforced in large parts of the United States of America. (p. 288)

Forcing you to call a woman a man, or vice versa, is all the more satisfying when those holding the gun to your head know you don’t really believe it. That, at the constant ginning up of new hysterias keeps deplorable off-balance and on the defensive. (pp. 289-290)