Without a doubt, the “travel bug” bit me in my teenage years; the first infection might have been my first flight at 15 years old from California to Massachusetts to visit family. But then I had the opportunity to study at Tel Aviv University in Israel for a year (1969-1970), and my fate was sealed.

Fortunately, I married a man who not only loved to travel, too, but also enjoyed going to the same countries I wanted to see. When he was in the Navy (before we’d met) and in his work as a consulting engineer, he saw a number of countries that I’ve never seen. Then again, on my return trip from Israel I had six weeks to see parts of Europe that he has never seen. Everywhere we’ve been together, we’ve been fascinated by the various cultures; both of us loved to learn and have new experiences. I would study up on each country’s culture before we left and share with him those parts I thought he would enjoy. It has been a great partnership.

Our favorite part of the world was Southeast Asia. For me, I appreciated the connection to my Buddhist practice (at that time). I think that Jerry enjoyed how exotic these countries were compared to the Western countries. The beauty, color, and extravagance of traditional costumes and temples compared to Western mores were captivating. And often the people were charming, too. By the time we went to Australia, Jerry was a bit put off by how “ordinary” it was (except for the indigenous community); I needed to remind him that there was much to see and enjoy, in spite of the many similarities to our own country.

Today I was surprised to realize how many years have passed since our last major trip: twelve years. We visited Thailand to visit friends, and then spent a week in beautiful Kyoto, Japan. We had planned a three-week Mediterranean cruise just before the pandemic, and I was looking forward to introducing Jerry to Israel for the first time. The cruise has been rescheduled for 2023. I also realized that we have not contemplated any other major trips. (We make periodic trips around Florida which we really enjoy). 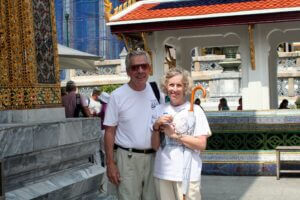 I was spurred to write this post after my husband spoke to friends of ours who planned on going to Australia and New Zealand. They were excited about the trip, since it was the only continent that they had not visited. I was happy for them, but was a bit surprised that my own travel juices had not been stimulated. I started to sift through the possible reasons for my reaction: was I tired of traveling? Was it too much work to plan, pack, travel sometimes over 20 hours by jet, deal with jet lag? Gradually the possible reason for my reticence was unrelated to travel at all.

Suddenly I realized that I might be pursuing a different kind of journey.

So much of my personal journey has been in the outer world; I realized that we had visited nearly 20 countries (what a blessing!) and some more than once. We’d wanted to step outside our own limited world, to learn how others perceived the world they lived in, the daily worries that they faced, the beliefs they held. We did our best to notice differences but not necessarily make judgments about their culture unless they violated our own values. Even then, I tried to hold my perceptions lightly.

But now I realize that although there is still much to enjoy in the outer world, that world is transient and ever-changing. Traversing it stimulates my thinking about my own life and the way others live, but it doesn’t hold the appeal it once did. And instead of exploring the outer world, I’ve become much more taken by my inner world.

The inner world offers an endless opportunity to explore relationships, commitment, and connection to G-d. Instead of flying planes, I embark on the journey of contemplation, prayer, and meditation. These efforts are not a 24-hour per day occupation; most of my days are spent doing ordinary things just like most other people. And yet my days are infused with possibility, reminding me that I have an ongoing opportunity to go deeper, to understand more profoundly important questions. Needless to say, acknowledging my gratitude for my life fills me with joy.

So beyond our short Florida or eastern and southern U.S. trips, as well as our cruise next year, I don’t know if we will pursue any other “outer” travels in our future.

I can say that life is fine, with all its ups and down, just as it is.