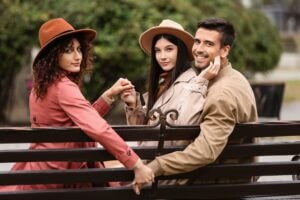 The more I talk to my kiddo and gathered friends (in SoCal), the more I am getting called “old” and “old fashioned”.  Imagine me, a young mother, not yet 50, being schooled by my 18-year-old about how the LGBTQIA+ community isn’t what it used to be.

I’ve been told time and again that my experiences are no longer valid.  Whether or not they’d come out and say it exactly, that’s the gist.  It would never be said explicitly, because everyone’s experiences are valid, etc, etc.  But it has been said to me that everything I know is the old way.

The old way includes bisexuals.  You know, the women or men that love women and men.

Since we know now that gender either doesn’t exist at all or is completely non-binary or on a scale of masc to femme (unless you’re indigenous and Two-Spirit), this means that bisexuality no longer exists.  The Federalist called it back in 2017.  Trans movements are erasing homosexuality.  If there is no gender or it is how you feel or it is fluid, then there can be no protections based upon gender or sexual orientation since it can be changed at any moment.

According to my kid, this makes me a TERF.

Maybe it does.  But I have always felt that rights for people with various disorders are individual and shouldn’t be lumped into a large, generalized group that does not take into account their various issues.  Trans people are not a homogenous group.  Some are relatively well adjusted.  Many are not.  Many have serious identity conflicts that are not just related to their ideas of being in the wrong body.

Regardless, by definition, this eliminates bisexuality.  If there are no genders, then bisexuality is a lie.  It is even to the point that biresource.org, the resource for bisexuals is now calling it “bi+” because there are trans people who consider themselves bisexual.  They even go so far as to define it:

For example, bi+ activist Robyn Ochs defines bisexuality as “the potential for attraction to people with genders similar to and different from [your] own.”

I guess the bi, in bisexual refers to what, then?  No one really has an answer for that.  It is like lesbian or gay.  It is out of fashion.  Now it is all just queer.

There is, therefore, only pan-sexuality; the idea that one is attracted to a person, not a gender.

In 2017, 390 people out of 100,000 were estimated to be trans.  Approximately 50% of respondents were younger and it was expected that more would identify in the future.  According to the Williams Institute, over 1,397,000 people in the US identify as transgender.  It is only expected to rise as younger people are identifying more and more as queer, trans, or non-binary.

I never needed particular visibility.  I never felt the need to “come out” to anyone.  Whoever I dated was my business and if I introduced my person to someone, that was what it was.  If I felt like talking about the relationship, I did.  If I didn’t, I didn’t.  I didn’t need a flag or a pin or an undercut to show just how bisexual I was/wasn’t.  I never felt the need to explain it to anyone (except maybe my parents when I was in college, but I got over that).

I still do not need “visibility” or special treatment.  What I would like, however, is for my orientation to be respected and not turned into something it isn’t based upon this apparent fluidity of gender.  I would like to not be judged as some sort of bigot because I love men and women.

And I want my men to be men and my women to be women.

I understand that trans life is very hard and I have known a number of people who have transitioned partially or completely, had surgeries (or not).  I am not discounting any of that.  But what I do discount is changing the terminology to mean something completely other than what it is.

Fun side note: according to the Williams Institute, Texas is gayer than New York by more than 24,000 people.

Second side note: pictures searched through Shutterstock show more “trans” when searching “bisexual”.  Can’t be escaped.  I will provide no commentary about this.