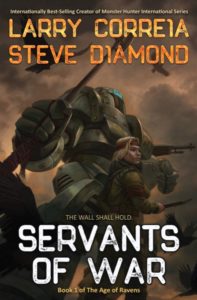 Illarion Glaskov is a miller’s son in a small farming village in the far north of Kolakolvia. It is so remote the Czar’s tax collectors have not visited it for years, and the Empire has forgotten to levy conscripts from it. That suits Glaskov. He would be the one drafted. He would as soon marry his fiancé Hana, raise a family and run the family mill.

“Servants of War,” a new fantasy novel by Larry Correia and Steve Diamond opens with Glaskov’s dreams being shattered. His village is attacked by demons that kill everyone in it except infants in their cradles and Glaskov. The infants are taken. They disappear. Glaskov escapes because he tricks the demon chasing him into getting its tail stuck in the mill’s turning grindstone. Glaskov then beats it to death before it frees itself.

Glaskov, badly wounded in the fight, survives only because he is rescued by the Witch of the North. One of two goddesses that rule this world, she is also known as Baba Yaga, the Sister of Nature. She is at war with her other surviving sister. She supports Kolalolvia, while her sister supports Almacia. The two nations have been at war for a century.

She also tells Glaskov he is at fault for the attack on his village. Since he did not fill the Czar’s conscription quota the village’s magical protection was withdrawn. She directs him to atone by going to Cosbetsnya, the capital, and joining the Czar’s army.

Glaskov obeys, and is soon a member of the Wall, an elite unit using magically-powered armored suits. He soon discovers that he has become enmeshed in a game being played by the two goddesses (and their dead sister) as well as ambitious men within the Czar’s government.

Correia has written a lot of fantasy and military SF since his arrival in 2007. “Servants of War” is the most unremittingly bleakest novel he has ever written, either solo or in collaboration. The book borrows heavily from Slavic legend for its background, and takes all the dark aspects of Slavic legend while incorporating few of its bright aspects. There is no victory for the good guys, only a holding action.

This does not mean it is bad. It may be among the best stories Correia and Diamond have written.  But it is dark. “Servants of War” is highly recommended for Correia fans, especially those who like his fantasy.