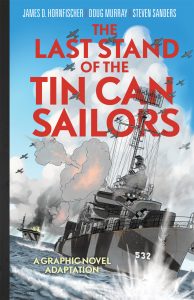 James Hornfischer exploded on the naval history scene in 2005 with his book “The Last Stand of the Tin Can Sailors.” It was an account of the Battle off Samar when a collection of destroyers, destroyer escorts, and escort carriers fought Japan’s main surface battle force to a standstill. Over the next dozen years he wrote four more books, three focused on the Pacific War. All were excellent. In 2021 he died.

“The Last Stand of the Tin Can Sailors: A Graphic Adaptation,” by James Hornfischer, Doug Murray, and Steven Sanders is a graphic novel adaptation of Hornfischer’s original book. Murray translated the book, doing the storyboarding and text while Sanders did the artwork. It is one of a series of graphic novels being published by Dead Reckoning, Naval Institute Press’s graphic imprint.

The book is a faithful adaptation of Hornfischer’s book. It follows the overall path of the original. The adaptor and artist capture the climactic battle between the “tin cans” (destroyers and destroyer escorts) and Japan’s powerful battleships and heavy cruisers. They show the desperate attacks made by the escort group to protect the carriers they are assigned to defend. They convey the confusion felt by both sides.

It suffers the inevitable simplifications that result from translating a text work into a visual form. Imagine a movie version of a great and sprawling story for a sense of what this means.  Often really enjoyable parts of the book get omitted in a visual retelling. So it is with this.

Judged on its own merits it is an above-average graphic work. It is not on the order of Art Spiegelman’s “Maus” (which jump-started the current graphic novel rage), but it is a cut above “Classics Illustrated.” The problem is it does not approach the brilliance of Hornfischer’s original work. The 2005 book overshines the 2021 graphic adaptation.

That is a shame. View as an independent work the graphic adaptation is an entertaining, informative, and sometimes inspired re-telling of the Battle of Samar. Murray and Sanders take a complex story and put it in a graphic format without losing significant details.

Those who enjoy graphic novels will enjoy this book. It is also a great book to give to a younger reader as an introduction to the 1941-45 Pacific War and the Battle of Leyte. It is fast-paced and engaging. It is a worthy tribute to James Hornfischer.

“The Last Stand of the Tin Can Sailors: A Graphic Adaptation,” by James Hornfischer, Doug Murray, and Steven Sanders,  Dead Reckoning, 2021, 208 pages, $29.95 (Hardcover)