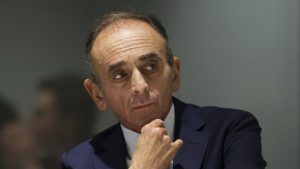 You’re forgiven if you’ve not heard of Eric Zammour. Head of the new “Reconquest” party, he’s polling around 14% currently in France’s 2022 presidential election. He’s often compared to Donald Trump (not kindly and not very accurately) since they seem to share the same general views on immigration – arguably an even bigger issue in France than in the United States. The proportion of America’s population (328 million) that is foreign-born (about 45 million, or 13.7 percent) is larger than France’s (a population of about 60 million with about 5.9 percent that is foreign-born).

Zammour is a proud French nationalist and ardent defender of Western Civilization. The left-wing media tags him as “far-right.” Funny, they never tag anyone as “far-left.” His Christmas message indicates suggests that he subscribes to French Exceptionalism, but it should inspire the citizens of any country that embraces our divine rights of life and liberty (see: Declaration of Independence). Americans, as Barack Obama suggested, are not the world’s only exceptional nation, even if he utterly and embarrassingly failed to grasp what made America truly exceptional.

If you’ve visited Congress Hall in Philadelphia – home of the first Congress from 1790 to 1800 – you may be struck by two very large portraits in two meeting rooms just off the ornate 2nd-floor chamber – King Louis XVI and his wife, Marie Antoinette. It was both in recognition and appreciation for the role played by France in America’s revolution. Without French warships and troops to help surround and siege British troops at Yorktown, Virginia in 1781, Queen Elizabeth might be our head of state.

We share history, traditions, and values – religious and otherwise – with our European sponsors, both England and France. And sometimes, those shared values emerge in wise and eloquent words. Zammour gets the prize for the best Christmas message of 2021, hands down.

While many of our pastors and public figures focus on other aspects of the Christmas Miracle, from the significance of the virgin birth to the fulfillment of old testament prophecies, we would also be wise to consider Christ’s powerful influence on our culture and government. No single individual has had more global impact, over so many years. Read this English translation of Zammour’s speech, and perhaps watch his French-language video message, if just for the imagery.

It is a great reminder of how Christian principles and values inspired our own founders, framers, and divinely-inspired rights, including equality before the law. It should also remind us of forces within our own country that relentlessly seeks to replace God with government as our true religion and source of our rights. It should also embolden us to oppose them relentlessly.

How powerful has Christianity’s influence shaped cultures around the world, going back centuries? A powerful book by the late speechwriter and historian Otto Scott, the Great Christian Revolution: How Christianity Transformed the World, details how Christianity influenced Reformed thinking and contributed to the eradication of many pagan influences, including cannibalism, child sacrifice, chattel slavery, and the concept of divine rights embedded in our Declaration of Independence. Sadly, we still have racial superiority and genocide with us (see: China). As a side note, Scott coined the term “the Silent Majority” later used with effect by President Richard Nixon.

My dear countrymen, my friends:

Tonight, Christianity celebrates Christmas. But not only Christianity. For one need not be Christian to celebrate Christmas. It suffices to love the West in general, and France in particular.

The night of Christmas Eve begins the celebration of a civilization – ours – that has enlightened human history. A civilization that believes man is absolutely free, whatever his birth, his past, his environment, his path.

In the Christian world, liberty has a divine nature and must be protected as the most precious treasure.

A civilization that believes men are equal in dignity. Everyone, from the prostitute to the king, and all in between – the beggar, the rich man, the widow, the orphan, the soldier, the leper – are children of god and all are equal before him. No race, no class – a holy equality.

The whole world admires western art. It is impossible not to be overwhelmed by the Pietà of Michelangelo.

A civilization that believes truth is neither theoretical nor relative but concrete, incarnated, and holy. To deny truth is to deny the Good. The lie is both the day-to-day and the eternal face of evil.

This infinite respect for truth has allowed the enormous rise of philosophy and exact science in the west.

A civilization that believes heaven on earth doesn’t exist and never will. A civilization that refuses to give credence to utopias and projects for a perfect society-communism, nazism-that destroyed the 20th century and threaten the 21st with a new and still more troubling face.

Knowing how to win in war is good and the Christian world must never refuse to make war when it is attacked. It must win the war, but knowing how to win the peace after victory is harder still.

To this idea, we owe the incomparably peaceful character of western societies when they are faithful to themselves.

Societies that have committed errors, mistakes, crimes: obviously, for it is built by men and all men are imperfect, egotistical, whether believers or not. But a civilization that must be considered the most evolved, sophisticated, creative, and tolerant the world has ever known.

St. Irenaeus of Lyon, Clovis, St. Louis, Joan of Arc, Thomas Aquinas who taught at the Sorbonne, Bossuet, Fénelon, Blaise Pascal, Thérèse of Lisieux, Paul Claudel, and so many others.

The eldest daughter of the Church has borne so many wonderful children, and our 86 cathedrals are the most beautiful of all – of which Victor Hugo made a beloved symbol across five continents.

General de Gaulle, in the greatest confidence, gave regular confession. His faith played a determinant role in the destiny of our country. Without the Cross, there would not have been a Cross of Lorraine.

Censored, threatened, tortured, assassinated: never in its long history has this religion been martyred in such dreadful silence. I solemnly swear that France will make their voice heard on the world stage.

Tonight, Christians celebrate the birth of Jesus. But others – all others – in France can also celebrate Christmas. That is the purpose of Christmas trees, gifts, kisses, and wonderful smiles of children.

My name comes from ancient times, and means “olive tree” in Berber – the tree of peace. Tonight I wish that everyone will find peace – peace in each of us, and peace among us.

Christmas is the opposite of civil war. It is the reconciliation that shines in the night. The humble and moving Nativity, present in so many families, delivers its message through the centuries. The miracle returns every December 24 at midnight.