The Federal Election Commission attracts little public attention. Oh, sure, there are advocacy groups like Common Cause who often attempt to influence FEC deliberations. People like me who (used to) run political action committees (PACs) or work with federal election campaigns pay careful attention.

But on November 2, election day in Virginia, New Jersey, and other states, the FEC reported on the results of a recent vote to dismiss a “matter under review” (MUR, in the language of Washington acronyms).

What caught my attention – and that of Axios, a center-left online media outlet – was a rare 4-2 bipartisan vote. The Democratic chair, Shana Broussard, joined the three Republicans to dismiss a challenge made by a pro-environmental coalition group in Montana pushing for clean water standards for hard-rock mining operations.

The Montana Mining Association and its members felt differently. They scored $270,000 in cash from a foreign-owned company called Sandfire Resources America, with no sources of revenue in the United States and zero cash flow. The charge was that Sandfire’s contributions to the MMA and a “no on I-186” campaign were illegal under federal law. Sandfire is a Canadian subsidiary of an Australian mining firm. The contributions came from foreigners.

Before we go further, some background is in order. A heavily Democratic post-Watergate scandal Congress in 1974 created the Federal Election Commission to enforce their reforms to fix abuses of prior elections (some of what Congress did was deemed unconstitutional in 1976 by the US Supreme Court in Buckley vs. Valeo). The FEC now consists of six commissioners, three from each major party, which the Senate confirms to enforce the law. Generally, criminal matters are referred to the US Attorney for the District of Columbia. Sometimes, other US Attorneys choose the enforce the law of their own volition. The FEC most often uses fines to punish most wrongdoers, including those guilty of what media commentator and producer Dinesh D’Souza did. He was punished differently. Side note: President Trump pardoned D’Souza.

Here’s the thing. When Democrats are in the White House, the Senate Republican leader nominates any vacancies among the three GOP FEC slots, one every couple of years; vice versa when the GOP is in the White House. Usually, not always, FEC nominees are announced in pairs – one Democrat, one Republican. Both parties tend to pick nominees who will reflect their respective philosophies and protect their party’s interests. It is designed to make sure any FEC enforcement actions or interpretations of law require a bipartisan majority. There is no tie-breaking vote; matters die on a 3-3 vote. Most enforcement matters usually result in a 6-0 or, occasionally, a 5-1 vote.

So what’s the deal? Why did a divided FEC decide that foreign entities, even corporations, can contribute to an election in the US, in this case, a ballot initiative, at least under federal law? Aren’t foreign political contributions in US elections illegal?

That’s fine, but what’s the definition of an election?

And therein lies the rub. The Federal definition of an election does not include elections that do not involve actual candidates. Not according to me, but a legal opinion by the FEC’s legal shop.

A slim bipartisan majority of the FEC concurred.

Since the Montana ballot initiative was not inextricably linked to a candidate – the FEC’s standard – it does not qualify as an “election” under federal law.

Xi Jinping, call your office. Vladimir is already on the phone.

There were two “no” votes on the FEC, including Democrat Ellen Weintraub, who has long ascribed to a rather expansive view of FEC authority shared by few. Very few. Weintraub:

“As of today, though, the Commission has reversed course, deciding that under the Act, the term ‘election’ does not encompass state and local ballot issues. For the first time, the Commission has voted to allow political donations by foreign nationals to a domestic ballot initiative committee. Under the circumstances presented by this matter – where the ballot initiative at issue did not have anything to do with a candidate election, and no other evidence suggested that the initiative effort was inextricably linked to a candidate election – my colleagues voted against investigating the allegations presented by the complaint.”

Fortunately, seven states already prohibit foreign nationals from contributions to state-sanctioned elections, which by definition include ballot initiatives and referenda. But this is a national concern. Instead of lobbying each state to develop their own rules, there is a simple fix courtesy of genuinely bipartisan legislation authored by US Rep. Brian Fitzpatrick (R-PA), with ten cosponsors. It simply amends the Federal Election Campaign Act to address the gap in Federal law identified by the FEC. Here’s the entire bill: 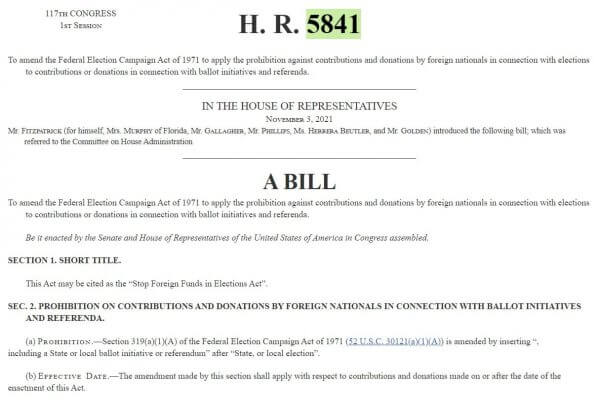 Axios thinks that foreign nationals might decide to contribute to state ballot initiatives involving congressional redistricting, but I’m not so sure. Such referenda are very rare. The real challenges are initiatives involving infrastructure and American resources, such as Montana’s mining initiative. Imagine how China’s Xi might hide and launder campaign contributions towards initiatives that could provide his country’s access to US rare earth minerals? Or, how about backdoor Chinese funding of major US port expansions in, say, inland facilities in the US (e.g., Port of Catoosa, Oklahoma) eager for investment and traffic via the Arkansas and Mississippi Rivers? Don’t think it can’t happen?

Ask the people of Montana. By the way, I-186 was defeated by a margin of 56 percent to 44 percent. Foreign-owned Sandfire was on the winning side. Maybe they would have won anyway, but $300,000 in a small media market like Montana goes a long way.

Forget the issue, and whatever side should have won. I might have agreed with the Montana Mining Association and their foreign funders. Maybe not, but that’s the wrong question: do you want foreign nationals to be empowered to influence your elections this way? Australians and Canadians are one thing; imagine what Chinese Communists and their pals in Moscow (or Iran) might try to do, laundered through multiple organizations you never hear or learn about until the election is over?

This is not rocket science. The question is, how long will it take for Congress to act? This is one of those sporadic instances where members of the “right” and even the “far-left” seem to have common ground.

(Disclosure: the author was nominated to the Federal Election Commission by President Bill Clinton, at the recommendation of Senate GOP leader Robert Dole, in 1996. He withdrew his nomination. A story for another day.)